Three days after being discharged, Jorge Lanata was again admitted to the Favaloro Foundation

The Republic Square is a no man’s land. An allegory of the country that degrades (Nicolás Stulberg)

It is the Republic Square. And it is no man’s land.

Again: it is the Plaza de la República, a place where anything can happen. And nothing happens.

There is nothing and no one who can stop the acceleration of the Argentine carrion. It was not possible on November 26, 2020, when the headquarters of the government of the Nation succumbed to the brave bars. Inside that building was the coffin with the body of Diego Maradona, who had died a day before. Failed the pacifying attempt of a president with a megaphone, and while the bars took control of the heart of power, the drawer was moved to another room. It was necessary to avoid that they also became owners of the funeral. And the coffin.

Three and a half months later, in the same place where one of the first Argentine flags was flown in 1812, the bars once again confirmed that Argentina is basically a decrepit stadium under their power. And at that stage, as we well know, they are the bosses, they do what they want. Partially cut off the traffic of the widest avenue in the world, steal phones, wallets and what they will find in their path. So much so, that they scared Maradona’s ex-wife and daughters away. The ladies spent ten minutes by the place and took refuge in a hotel, although they say that it was not the case. And that they had their own protection from burly companions. Bars? 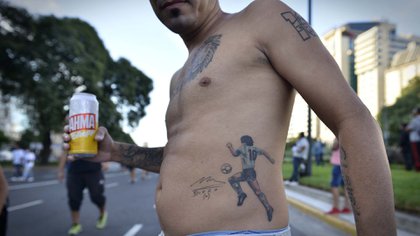 Three and a half months later, in the same place where one of the first Argentine flags was flown in 1812, the bars once again confirmed that Argentina is basically a decrepit stadium under their power (Photo Gustavo Gavotti)

What a strange country Argentina. He succeeds in bringing a large group of foreign correspondents to the Obelisk on a late summer Wednesday to see and tell first-hand a story that, thousands of kilometers away, seduced all its editors: Maradona’s family denounces that the world champion he did not die, they killed him. And the story that they end up telling United States and Germany, France and Italy, Brazil and Spain, Russia, China, Mexico, United Kingdom, Holland and a long etcetera is that of the uncontrolled drunkards, the drugged out of whack, those desperate to steal whatever it is. And that of the anomie of institutions and society.

“The atmosphere is very heavy. Loaded and bravo. Also against the press ”, describes one of those foreign colleagues. Another one goes further: “The impunity with which they cut traffic and generated chaos without any kind of reaction from the authorities was striking. But hey … it’s Argentina ”. 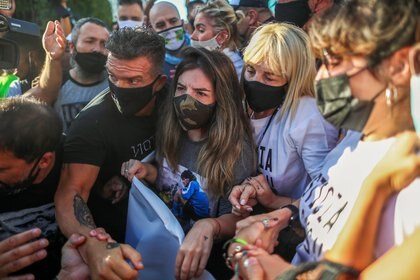 “The atmosphere is very heavy. Loaded and bravo. Also against the press ”, described one of the foreign colleagues (REUTERS / Agustin Marcarian)

It is Argentina, the country of scavengers that continues to devour what remains of Maradona. The story of a footballer from another world, of the incredible dream of a sportsman, is turning bitter, beyond the rude, sometimes unacceptable mistakes that the protagonist himself made in his 60 years of extremely intense life.

One day we confirmed that Maradona could not be on his feet, precisely he, who was going ahead with any kick to the ankle. Another day we learn that he is no longer using drugs, but that his new addictions were diverted to pills and alcohol. Another day we found out that they made him smoke marijuana and get drunk so he wouldn’t bother. Another, who used the phones and answered on his behalf. And that they forged his signature, that they diverted money from his estate, that they laughed and made fun of him in thousands of conversations and WhatsApp messages.

We learned that he was the center of a scheme that too many people lived on who didn’t want him, people who confined him to a zombie mode to keep the business alive. Until he died, the business ended and another story was opened that threatens striped suits. Maradona died alone, mistreated and sad, more than enough to sadden the country that was proud of him. And what we need to know once the medical board and prosecutors speak.

That is why it is correct that Dieguito fernando, aged eight, arrived at the Obelisk hand in hand with Veronica Ojeda, with ear plugs and a visor protecting his head. It doesn’t matter whether or not she should be there, her mother knows that better than anyone. But once you hit the (lost) Republic Square, the best thing to do is protect yourself. He will be a Maradona, yes, but he, like all of us, is stepping on no man’s land.