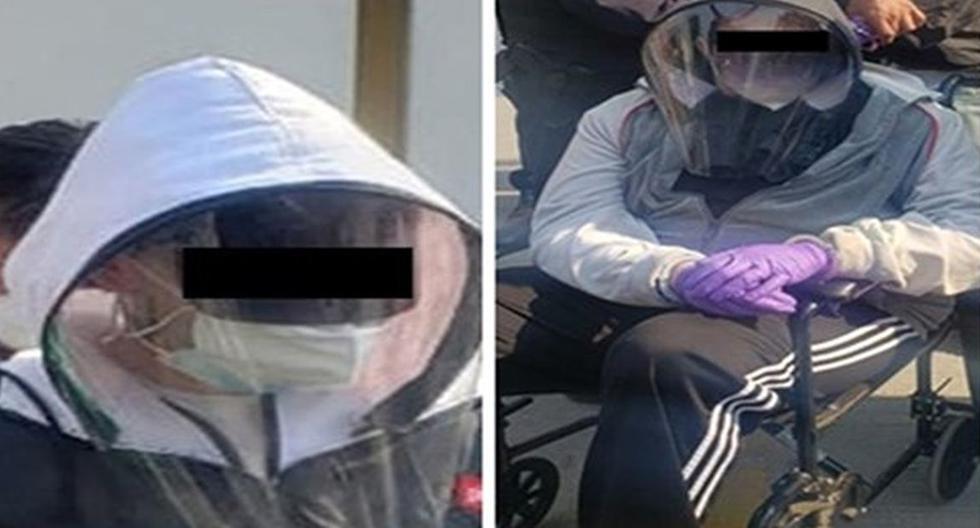 The current scenario in Brazil, which combines the initiation of vaccination with uncontrolled transmission of the covid-19, it can turn the country into a ” factory ” of variants potentially capable of escaping the efficacy of vaccines entirely.

This is the evaluation of a group of British scientists directly involved in some of the main research on coronavirus mutations.

Researchers from Imperial College London and the University of Leicester argue that lockdowns and other containment measures are especially necessary during the vaccination of the population.

They explain that it is precisely the contact between vaccinees and variants that favors the appearance of “super powerful” mutations, capable of totally circumventing the action of immunization.

And, in Brazil, there is an explosive combination for this to occur: vaccination is still proceeding at a slow pace, there is the variant with the E484k mutation (which avoids antibodies) and there are high rates of infection.

The Manaus variant and vaccines

The greatest danger is in the contact of the Manaus variant, nicknamed P.1, with recently vaccinated people, explains virologist Julian Tang, from the University of Leicester, in the United Kingdom.

Upon entering the human cell and encountering a still small amount of vaccine antibodies, the variant, by replicating, can promote more resistant mutations to those antibodies, he warns.

“If you get vaccinated on Monday, you are not immediately protected. The antibodies in the vaccine take a few weeks to appear and you can still contract the original virus or the P.1 variant, ”explains Tang.

“If those vaccine antibodies arise while the infection is occurring and is spreading through the body, the virus can replicate in a way that evade antibodies in a process of natural selection ”.

This development is part of the evolutionary process of the virus, which tries to adapt to “adversity”.

A vaccinated but infected person can transmit this mutated virus if there are no control measures, such as quarantines and the closure of businesses and leisure spaces.

The risk of this happening would be less if the Manaus variant did not spread throughout the country and if the infections were under control.

This is because the possibility that the parent virus can adhere in large quantities to the cells of a vaccinated person is small, since immunization is precisely what it is intended to prevent.

But the E484k mutation, present in the Manaus variant, affects exactly the main point of attachment between the virus and the cells, making the “Coupling” and reducing the effectiveness of so-called neutralizing antibodies.

Preliminary research indicates reduced efficacy of the Oxford-AstraZeneca vaccine against variants loaded with the E484K mutation, and the Butatan Institute is investigating its impact on the percentage of protection offered by CoronaVac.

“If there is an uncontrolled transmission of the virus, that is, in an environment without rules of social distance, without confinement or the use of masks, the persons susceptible of being infected will be mixed with the vaccinated ones ”.

“Without barriers, the virus can be transmitted between populations, potentially generating variants that escape the vaccine,” Tang explains to BBC News Brazil. 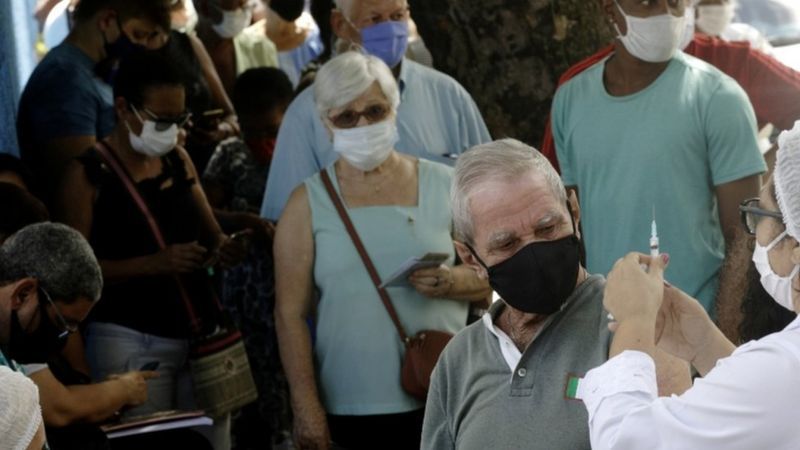 Brazil vaccinated about 3% of the population and is still negotiating to acquire enough vaccines to serve all the inhabitants. At some health posts, the elderly had to queue. (Photo: Reuters).

“And it will happen especially if there is a significant epidemic situation in a country with moderate vaccination success.”

“Thus the perfect balance between immune and infected is achieved. And when these populations mix, there is a risk that a new variant resistant to the vaccine will emerge ”, the expert tells BBC News Brazil.

The epidemic is out of control in Brazil

Brazil is experiencing exactly this confluence between an early vaccination phase and a peak of covid-19 cases.

The country surpassed the United States in the unfortunate record of infections in 24 hours.

Data published this Thursday by the World Health Organization showed that 59,900 cases of covid-19 were registered in Brazil in 24 hours. In the US, it was 57,800.

The number of daily deaths also continues to rise and break records.

On March 3 they registered 1,800 deaths in one day, the highest figure since the start of the pandemic. In more than half of the Brazilian states, the occupancy of intensive care beds exceeds 80%. 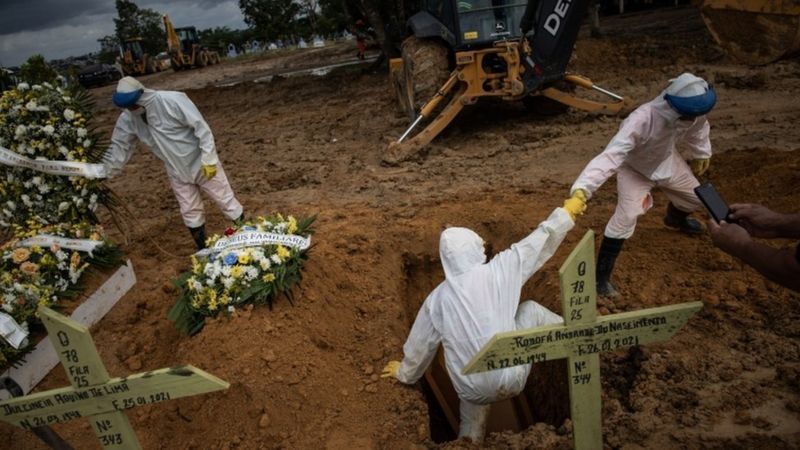 Faced with the collapse of health systems in several municipalities, the governors have decreed blocking or social distancing measures.

Despite the uncontrolled infections, the president Jair Bolsonaro he again declared against the restrictions.

“As for me, we will never have lockdown. It is never a policy that has not worked anywhere in the world, “the president considered.

But the data belies Bolsonaro’s line.

In the United Kingdom, the confinement in force throughout the country since the beginning of January reduced COVID-19 infections by two thirds.

In London, the decline was 80%, according to research by Imperial College London.

“From a scientific point of view, the closure of borders and the application of home quarantines are effective in reducing infections.”

“And reducing infections has its benefits. The risk of variants emerging is reduced, time is gained for the vaccination campaign to advance and for research to find vaccines adapted to the variants that currently exist ”, says Professor Peter Baker.

Manaus variant may be dominant

In addition, experts warn that, if control measures are not taken, the Manaus variant may end up replacing the original virus and become prevalent throughout the country.

P.1 already circulates in at least 10 Brazilian states, in addition to being responsible for almost all current infections in the capital of Amazonas. 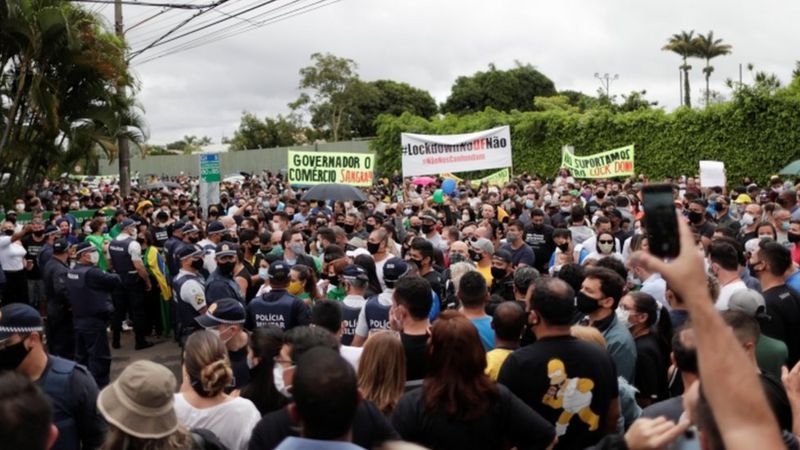 In Brazil there have been protests against the confinement announced at the end of February. (Photo: Reuters).

A study led by Whittaker showed that the Manaus variant is between 1.4 and 2.2 times more transmissible than the original virus.

Research also reveals that P.1 is able to evade the immune response from previous infections in 25% to 61% of cases.

That is, it can cause reinfections in individuals who have already had covid-19.

And reinfections are another important ingredient for dangerous mutations, says Peter Baker of Imperial College London.

“When these variants come into contact with people who have already been infected, there is pressure for them to mutate more, to find a way to reinfect previously immunized people,” he says.

“The combination of a previous outbreak and a major new outbreak, in which people who already have immunity are reinfected, creates an environment conducive to mutations. We believe that this is what happened in the Brazilian context ”.

A risk for everyone

In addition to already expanding throughout the Brazilian territory, the Manaus variant has so far been detected in 25 countries, despite the fact that several nations have canceled flights to Brazil and imposed quarantines and covid-19 tests on anyone who I arrived from the South American country.

This reveals that uncontrolled disease in one country puts other nations at risk.

“If Brazil is allowed to replicate the virus in an uncontrolled way, these variants can emerge and travel anywhere,” says virologist Julian Tang of the University of Leicester.

“If you have a virus production barn in a country, if you don’t control transmission, you are going to have mutations that are produced by natural selection, if these variants travel the world and some of them escape vaccines totally or partially, for of course it is a risk ”.

Researchers interviewed by BBC News Brazil assess that mass vaccination, combined with measures to restrict social contact, such as confinements, the use of masks and the closure of businesses, are important to contain the high rates of infection and prevent new mutations, while immunization progresses.

“No one is safe until we are all safe. And ensuring safety means limiting the possibility of variants emerging. Control measures are useful to achieve this, but it is perhaps even more important to ensure a fair global vaccination strategy ”.

“That means no country should be left behind,” proclaims Charlie Whittaker of Imperial College London.

Brazil: Death toll rises to 19 due to shipwreck in the north of the country