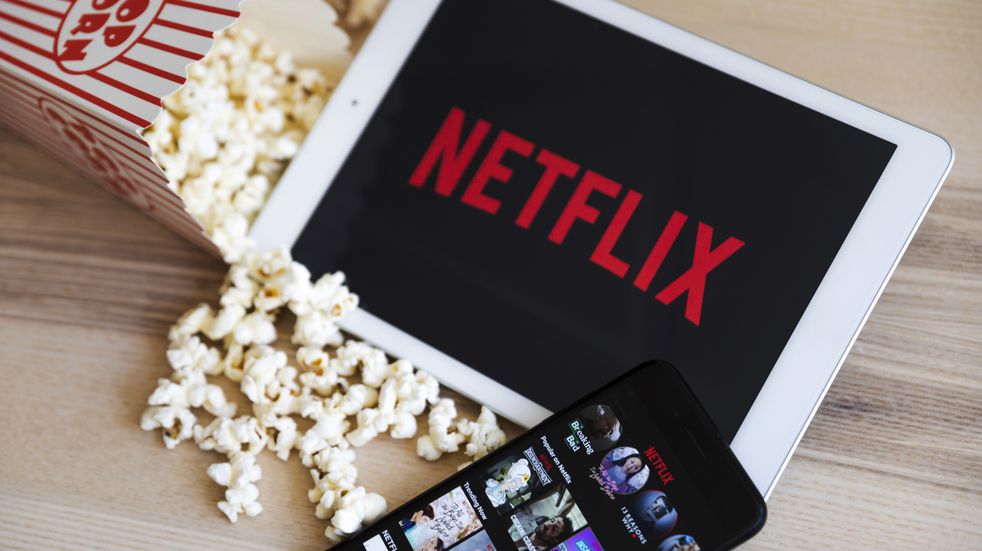 New Tax on Streaming Services in the Province of Buenos Aires

The Buenos Aires governor Axel Kicillof and his Minister of Health, Daniel Gollan, remain very concerned about the daily cases of COVID-19 that are registered in their territory. Although the curve seems stabilized, the number of infected continues to exceed 10,000 daily cases.

A very high number that does not allow the situation to decompress in intensive care units that have saturated beds. And even worse, Gollan, warned that the drop in ICU bed occupancy occurred because “there were many more deaths than discharges of the patients who occupied them”.

“We continue to see a drop in cases, although the speed of the drop slowed. We also did not notice an impact on the decrease in the use of intensive care beds.” He warned and remarked that: “With the stress of the system, a new peak would be dramatic”.

The high fatality rate had been confirmed by Gollan himself a Infobae. Almost 7 out of 10 people over 60 who enter ICUs die. 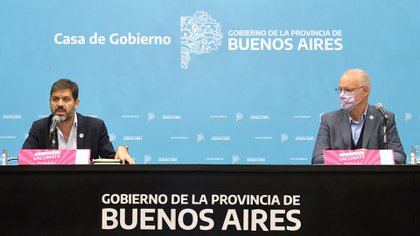 Minister Daniel Gollan, together with Daniel Bianco, the Chief of Staff, warned that the drop in the occupation of ICU beds occurred because “there were many more deaths than discharges of the patients who occupied them.” (PBA Press)

In the province of Buenos Aires, 43.6% of the country’s patients and 51.9% of deaths are concentrated.

If the 135 municipalities that make up the Buenos Aires territory are taken into account, the AMBA region, made up of 40 districts, concentrates the 76,7% of those infected by COVID-19 since the pandemic began. The 23,3% corresponds to the rest of the province of Buenos Aires.

These epidemiological data do not mean that outside the AMBA the situation is better. There are municipalities, such as Balcarce, Junín or Tres Arroyos that the occupation of their therapy beds is 100% and the incidence of cases taking into account their population, places them in Red zone, as can be seen in the tables and maps made based on the data prepared by the Infobae Data Unit, in charge of Sandra Crucianelli.

In Tres Arroyos, for example, the intendant Carlos Sanchez, acknowledged last Tuesday that its health system collapsed due to the increase in coronavirus cases and warned that from that day all COVID-19 patients must be admitted to their homes.

“I’m making an almost desperate call so that people comply and do not leave because each one’s life goes. We do not ask for more than that, it is not a craving. Stay inside as much as you can”, begged the communal chief.

Last week, during the meeting of the Crisis Committee, the possibility of applying the “last bed protocol “This is having to choose who to give a hospital bed to when there are many more cases to attend to. To meet the growing demand for coronavirus infections, the district has only the Municipal Health Center and the Hispanic Clinic. On Friday the availability of ICU beds was at the top of its capacity and the rest at 90%. 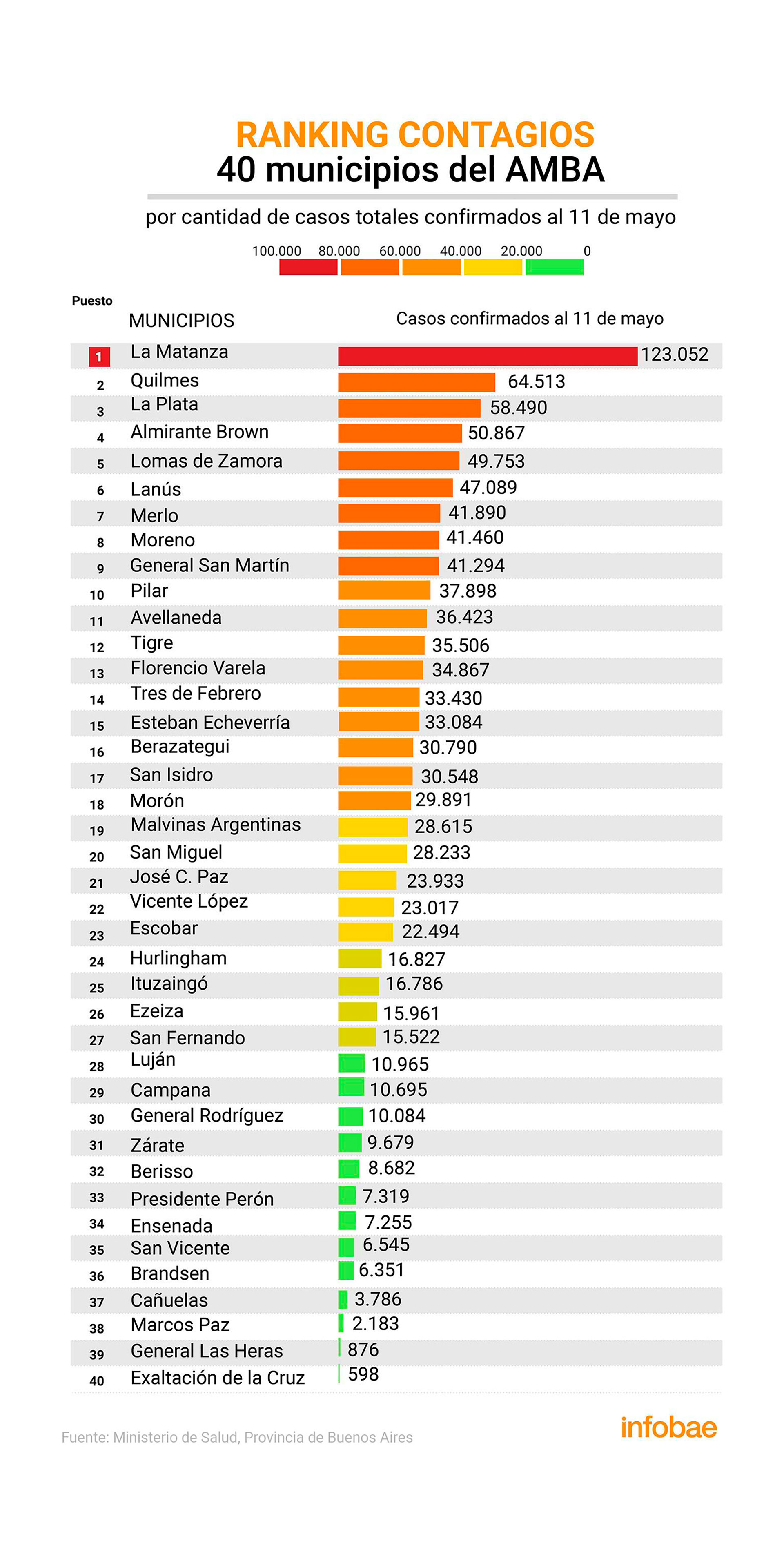 Only in one municipality, The slaughter, groups almost the 10% of deaths for coronavirus (3,404) and the same percentage of positive cases that climbs to almost 124,000.

According to the official records of the Buenos Aires Ministry of Health, La Matanza is followed by Quilmes, with 64,513 confirmed cases and 1,941 deaths.

The two mayoralties are part of the second cord of the suburbs – a part of La Matanza also occupies a portion of the first cord-. The first and second cordons are the ones that most concern the Buenos Aires authorities because their health network is weaker, although it was reinforced last year.

In a good part of these districts, especially the 24 that also make up the Buenos Aires suburbs, such as Presidente Perón, Avellaneda, Lanús, Berazategui and José C. Paz, there are significant pockets of poverty, indigence and unemployment.

In fact, last year, after the quarantine and mandatory isolation, the provincial, municipal and national authorities, reinforced the delivery of food for the most vulnerable sectors.

At payment, the capital city of the province, with 58,410 coronavirus cases and 1,679 deaths ranks third. The evolution of occupation of therapy beds in that district was dramatic, not because of the hospitalization of patients from the municipality, but because of the referral of patients from other municipalities. In the last three weeks they went from 65 to 92 percent.

The latest death of a patient referred to the health system in that district was known on Thursday. It was called Noelia Martínez Rodríguez, was 38 years old, had been transferred urgently from the municipality of Adolfo Gonzales Chaves.

Noelia was a Buenos Aires police officer. He worked in that town, where he lived. In that security force, the largest in the country, as soon as the 28% of staff.

The fourth place, always according to the total cases and without taking into account the number of inhabitants, is the first district that is not part of the AMBA, General Pueyrredón. The municipality headed by Guillermo Montenegro, and whose head is the city of Mar del Plata. Infections reach 58,410 and deaths reach 1,731.

The first five places are completed with the match of Admiral Brown. Conducted by Mariano Cascallares, register 50,867 positive cases and 1,565 deaths. 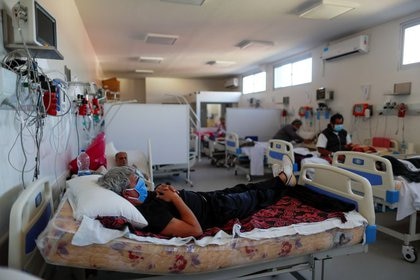 Rodolfo Velazquez, who suffers from a coronavirus (COVID-19) patient, rests in his intensive care bed at the Dr. Alberto Antranik Eurnekian hospital, in Ezeiza, in the suburbs of Buenos Aires, Argentina.

The three rings of the suburbs

According to the latest records of the Epidemiological Surveillance and Outbreak Control Directorate, which depends on the provincial Ministry of Health, to which it had access Infobae, it is highlighted that the highest concentration of cases, (467.89) correspond to second cord of the suburbs formed by the municipalities of: Quilmes, Berazategui, Florencio Varela, Esteban Echeverría, Ezeiza, Moreno, Merlo, Malvinas Argentinas, Hurlingham, Ituzaingó, Tigre, San Fernando, José C. Paz, San Miguel, La Matanza (West) and Admiral Brown. 6,344,693 people live there.

In the third cordon and the rest of the AMBA 196,832 positive cases of COVID-19 have been counted since the pandemic began in the country. It is made up of the mayors of: La Plata, Berisso, Ensenada, San Vicente, Presidente, Perón, Marcos Paz, Gral. Rodríguez, Escobar and Pilar (until here third string) and Cañuelas, Brandsen, Zárate, Campana, Exaltación de la Cruz, Las Heras and Luján. 2,366,265 people live there.

The health ministry clarifies that coronavirus cases and the population are distributed as follows: 55% in the first cordon and 45% in the second cordon.

The “incidence” of cases that directly impacts each municipality, considering the population of each district, causes these positions to be reversed and for that reason, districts such as Pilar, San Vicente and Berisso have their ICU beds, almost one hundred percent. one hundred. 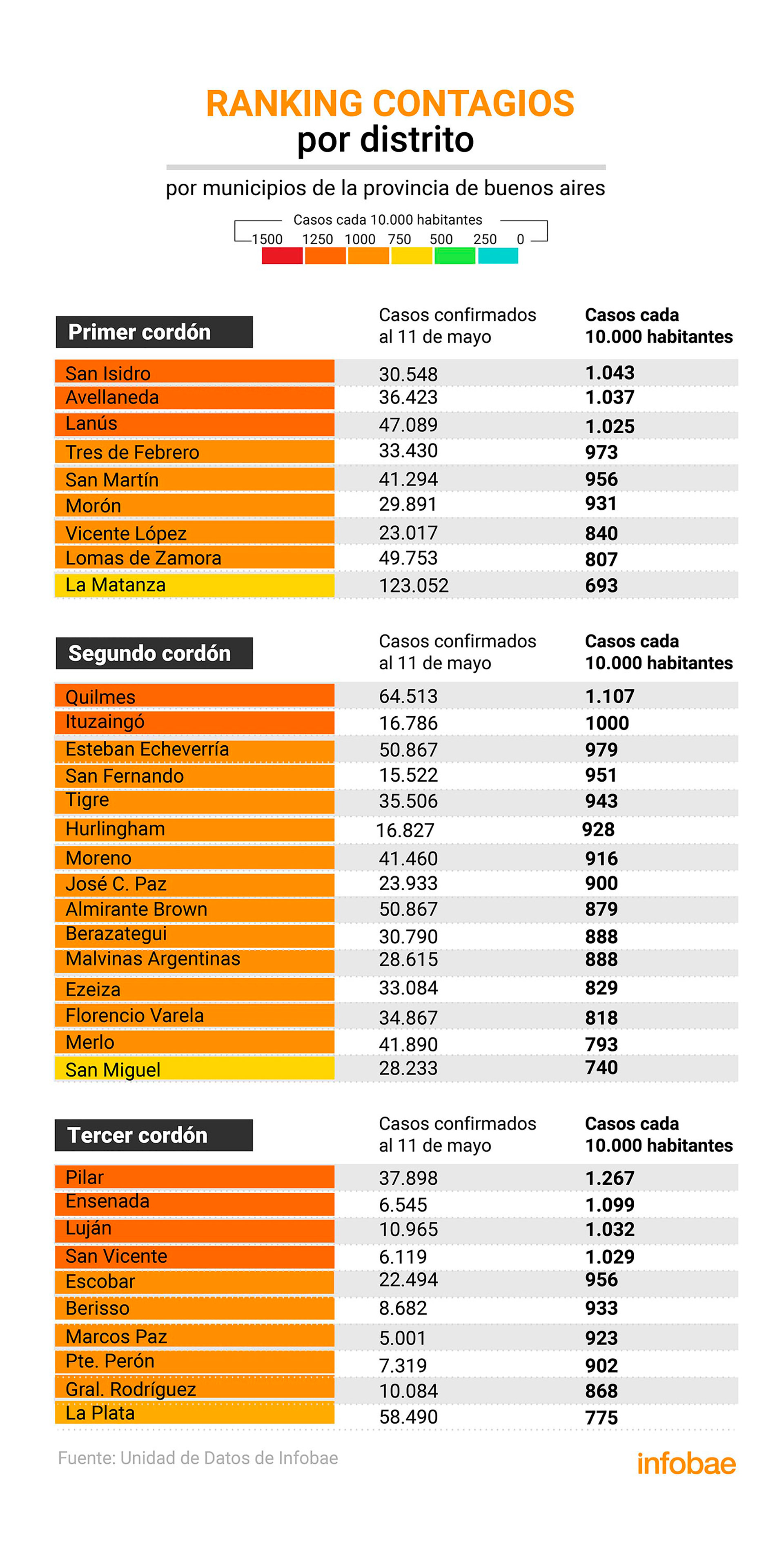 The data dumped so far correspond to those that are dumped daily in the “Situation Room” of the Ministry of Health of the province of Buenos Aires and is carried out based on the accumulated cases since the new coronavirus pandemic originated in Argentina. For that reason, when it is ensured that the Buenos Aires party of La Matanza is located in the first place of infections and deaths, its mayor, Fernando Espinoza placeholder image, usually clarifies that “Matanza is not the worst district” in terms of handling the pandemic.

The Infobae Data Unit crossed the accumulated positive coronavirus data with the number of inhabitants of each district. This is how the graph corresponding to the highest incidence in the province of Buenos Aires per 10,000 inhabitants was obtained. The results are revealing and explain the reason why several municipalities in the interior of the province have their health system collapsed.

The commune of Balcarce is the one with the highest incidence of COVID-19 infection in the province of Buenos Aires. With 6,351 confirmed cases, and a population of 44,966 people, its incidence is 1,412 contagions house 10,000 inhabitants. The district administered by Stephen Kingdom you have your ICU beds at 100% And as if that were not enough, they cannot refer patients with coronavirus to Mar del Plata, as they had been doing because the municipality of General Pueyrredón also has ICU beds in red.

“Today they are denying us that possibility of transfer because the hospital is at full capacity and we end up referring patients to the Federal Capital or to the Conurbano, 400 kilometers away, Therefore, we are trying to solve with what we can and with what we have, “said the communal chief in an interview with Lanoticia1.com and added:” The complex situation in Balcarce does not escape the reality of the rest of the community. Buenos Aires province”.

Balcarce is followed Pinamar, Bolivar, Laprida and Pilar. This last municipality, which belongs to the Third Cordon of the suburbs, appears as the one with the highest incidence in positive cases of COVID-19 in relation to the number of population among the 40 municipalities of the AMBA. In Pilar the ICU beds are with an occupancy greater than 90%. These communes are followed by Roque Pérez, Tandil Lobería, Quilmes and Ensenada (these two belong to the AMBA), Junín, Campana (AMBA) Colón, and then between position 15 and 19, the municipalities also of the Metropolitan Area of ​​Buenos Aires San Isidro , Avellaneda, Luján, San Vicente and Lanús.

General Pueyrredón, whose head is Mar del Plata, as the mayor of Balcarce said, also has a saturated health system. It is located 30 in the incidence ranking. With about 800 confirmed cases per day and a total of 58,410 positive cases since the pandemic began.

La Matanza is the most populous mayor’s office in the province. Live there 1,775,816 people. If the population data is crossed, with the number of infections and it is compared with the 135 municipalities of the province of Buenos Aires, ranks 88.

If the districts of the AMBA are taken into account, the mayor’s office governed by Fernando Espinoza placeholder image It is positioned in the 40th place. Does this mean that you have to be unconcerned and that everything is under control? The answer is no. On the contrary, with about 5,500 weekly cases the occupation of beds in the intensive units of the hospitals that depend on the province, the municipality and the private provider, varies between 76 and 83 percent occupancy.

Thursday Carla Vizzotti, the Minister of Health of the Nation, before a group of journalists from graphic and digital media assured that despite the impact of the restrictive measures imposed by the national government and that of the province of Buenos Aires, to avoid a greater viral circulation, “We still have tension in the health system, in the AMBA, the epicenter of the pandemic, and it is also increasing in other provinces where the first wave had been less ”.