Police brutality: Woman was subdued and died of suffocation in Tulum, Quintana Roo

Ministerial authorities investigate the confrontation between alleged hitmen of the Jalisco Nueva Generación Cartel against their rivals, who have terrified residents of Encarnación de Díaz for three days, La Chona.

According to the report of the Jalisco Prosecutor’s OfficeArmed civilians held a confrontation in the first minutes of this April 30, without any injuries being reported.

“However, In the exchange of shots, a farm where there is a tortilla factory located on Vicente Guerrero street in the Barrio Alto neighborhood, resulted in damage to the façade”, Highlighted the agency headed by Gerardo Octavio Solís Gómez.

In addition to this, The Jalisco prosecutor’s office confirmed that a gas tank was perforated by a large caliber projectile, which generated a fire and in turn caused damage to two vehicles that were parked in the vicinity. The column of fire was of such magnitude that it could be seen from dozens of meters away.

“Various expert opinions were requested at the site and will be attached to the investigations.”, Highlighted the authority on the strong shooting that users shared through social networks.

According to preliminary versions, an armed group traveled to a farm in a white car, where they fired multiple shots. Some videos began to circulate on the network. In them it is possible to observe the flames, at least 10 meters high, which is accompanied by sounds from firearms of various calibers.

This fact provoked the intense mobilization of elements of the state, municipal police and of the National Guard (GN), who moved to the scene.

In another footage, which was obtained from a security camera, you can see a black car, with four doors, of which a heavily armed subject descends which begins to attack a facade. Likewise, the pilot also draws his weapon without getting off his seat and attacks the facade of the place.

Moments later, all four doors open and from them three other men get off with apparent black bulletproof vests, who stop firing to approach the building. One of them kicks the front door while the others watch.

Suddenly, a small cloud of smoke appears in the frame and the four subjects tried to flee the place. One ran to the corner of the block, while the remaining three took cover behind the car, as a burst of bullets began to fall on them. Seconds later, the fourth passenger arrived at the vehicle, they repelled the attack and escaped.

At the back of the scene it is possible to perceive a column of fire that, apparently, was formed after the explosion of a gas cylinder. In addition, the family that resides in the building that recorded the event, recounted their experience while watching the attack.

“Well yeah, we’re good here, all good. Yes, here it was in the house yes, but we are fine. All good, do not hurry, ”says the voice of a woman who answered a phone call. Before the footage ends, a man comes to ask if they were okay, and another female voice doubts whether “they fucked one of them”.

This same filming revealed that this attack took place at midnight on April 28, which is why it was the confrontation that allegedly occurred in the house of a drug dealer in the Barrio Alto neighborhood, within Encarnación de Díaz. 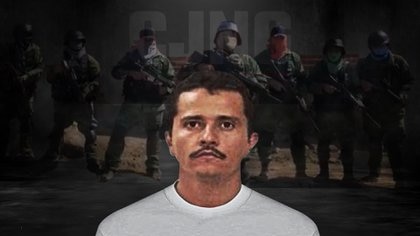 CJNG hitmen would have faced alleged rivals in the municipality.

Municipality authorities issued a statement in which they assured that 12 elements moved to the place after hearing the detonations between Vicente Guerrero and Victoria streets.

On the facade of the house, marked with the number 82, they found 2.23 and 7.62 caliber bullet holes, in addition to the gravel caused by the impacts and some percussion caps. Finally there was a knock on the door, but no one answered, so reinforcements were requested from different security corporations.

The main complaints of the residents of Encarnación de Díaz are against their municipal president, Felipe de Jesus Romo Cuellar, and the state governor, Enrique Alfaro, who have maintained the discourse of “everything is fine” in the entity, when the people are the ones who suffer the ravages of the attacks.

In addition to these events, two reporters from Aguascalientes who would have come to document the events were approached by two subjects who, after insulting them, took away their cell phones, which is why they took refuge in the municipal presidency facilities and requested help. After contacting the authorities of their state of origin, they were returned to custody.