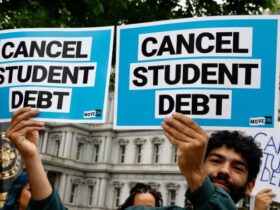 New storms have upended the lives of millions of people in Southern California, to the point that Mayor Karen Bass declared a state of emergency for the city of Los Angeles on Wednesday.
The declaration took effect immediately, in light of heavy rains that brought more traffic chaos on the streets, on slippery highways dangerous for drivers and strong winds in the Antelope Valley.
The declaration directs the Emergency Operations Organization to take steps necessary to protect people’s lives and homes, and calls on Governor Gavin Newsom to waive the regulations to aid response and recovery efforts for damage caused by the rains.

Bass also called for funds from the California Disaster Assistance Act to expedite the city’s access to other relief programs and resources in the state.
Meanwhile, the sinkhole that formed earlier this week in the Chatsworth area where two cars plunged had grown to about 45 feet deep.

The city council on Tuesday approved half a million dollars in emergency funds for repairs. Another $450,000 was approved for repairs on Mulholland Drive, between Summit Circle and Bowmont Drive.
The region – and the entire state – have been battered by a series of atmospheric rivers, and rainfall contributed to the Hollywood Reservoir logging nearly six inches of rain five days ago.

The California Highway Patrol (CHP) recorded dozens of car crashes, some with injuries and flooded roads, while in Agoura Hills, all lanes of Piuma Road were blocked north of the 5 Freeway in Castaic, due to a rock slide. rocks. They reopened at about 10:40 in the morning. “We put protective barriers where the landslide happened,” Kim Medina, spokesperson for the California Department of Transportation (CALTRANS), told GLM.

“We also installed electronic signs, at least four miles before motorists hit Templin Highway.” At press time, only two of the four lanes were open to vehicular traffic.

Medina added that crews of workers were also sent to clean up Highway 126 in Ventura County, between Filmore and Moorpark, where there was another mudslide.
The National Weather Service (NWS) in Oxnard reported that the series of storms will affect southern California through Tuesday, with winds of 25 to 45 miles per hour, snowfall between eight and 16 inches in mountainous areas with an elevation of 6,500 feet, and strong waves on the beaches.
Flooding was also reported Saturday in the Long Beach Peninsula community where heavy rains affected several residences along 67th Place. And a little further to the northwest, all lanes of the Long Beach Freeway (710) were flooded between Anaheim and Willow streets.

The NWS forecast the rain would fall at a rate of almost half an inch per hour.

“At these rates, the impacts will be slightly larger than what typically occurs with a storm of this magnitude. The ground is still quite saturated from previous rain…and there may be small mudslides on the foothills and typical minor road flooding,” NWS staff added.

Mireya Mendoza, a beautician from Long Beach who was talking on the street and in the middle of the deluge with her friend Novi Meha, from Cambodia, said that people have to be aware that you cannot drive fast on the roads and the situation is too dangerous for everyone.

“Water is necessary for everyone,” added the woman from Michoacán, Mexico. “The only thing that makes me sad is to see the homeless wet in the streets.”

On his part, 28-year-old Juan Hernández Martínez from Guerrero took refuge from the rain under the roof of his truck.
The humble flower vendor told GLM that, since the day was “bad”, from 8:00 in the morning to 12:30 noon, he had only sold two bouquets of $10 each.