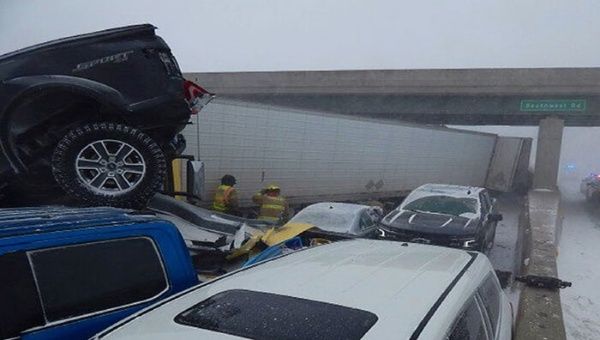 Winter storm kills at least 13 people in the US

The young Savannah Graziano was wearing a military vest and helmet when she got out of the truck and was hit by gunfire during the confrontation; her father was wanted for allegedly shooting his wife to death in Fontana

A 15-year-old girl who had been kidnapped died Tuesday from injuries caused by her fugitive father’s confrontation with San Bernardino County sheriffs on Highway 15 in the Hesperia area.

Savannah Graziano was in a pickup truck with her father, 45-year-old Anthony John Graziano, wanted for the fatal shooting of the teen’s mother Monday morning in the city of Fontana.

At a news conference, the San Bernardino County Sheriff said Tuesday afternoon that Savannah was wearing tactical gear and a helmet as she ran toward deputies as the shooting unfolded.

The teenager was injured by the gunshots and was taken to a hospital, but she died shortly before noon.

The authorities did not specify if the young woman was hit by bullets fired by her father or by the agents who responded to the attack.

Anthony John Graziano was found dead in the driver’s seat of the van. The man allegedly shot and killed his wife in a domestic violence incident Monday in the city of Fontana.

Authorities issued an Amber Alert after Graziano fled with her daughter, Savannah, in a white 2017 Nissan Frontier with California plates. The fugitive was described as dangerous and possibly armed.

Authorities received a call Tuesday morning from a person who said they saw a vehicle matching the Amber Alert description traveling south on the 15 Freeway in the Barstow area.

Agents located the truck and pursued it for about 45 miles.

The sheriff said that during the chase, Graziano, and possibly her daughter as well, constantly fired shots at officers through the back window of the truck.

Graziano’s shots disabled a patrol car that was pursuing him and repeatedly pierced the windshield of another unit.

Eventually, deputies were able to stop the fugitive’s truck on the side of the freeway in the Herperia city area and the shooting ensued.

Dicus said the teen got out of the truck on the passenger side and ran toward the marshals, but she fell amid the gunfire.

Officers initially didn’t realize it was the teen running toward them because she was wearing a military-style helmet and vest.

A rifle was reportedly the only weapon found in the truck with Graziano, but investigators believe the girl may have also fired shots.

During the exchange of fire, an officer was injured.

The search for Anthony John Graziano began Monday after his wife, Tracy Martinez, was shot to death near Cypress Elementary School in Fontana.

Authorities issued an Amber Alert because young Savannah Graziano was thought to be with her fugitive father. The wing was disabled after the standoff on the 15 Freeway.