According to the most recent listing, Freddie Figgers’ company is worth $62 million, something he achieved by being good and talented.

Figgers was abandoned as a baby next to garbage cans in rural America’s Florida.

“The children used to make fun of me; They called me ‘trash baby’, they told me ‘nobody loves you, you are dirty’. I remember times when I would get off the school bus and children would grab me and throw me in garbage cans and laugh at me,” he said in an interview with Jo Fidgen for the BBC program ‘Outlook’.

“It got to the point that my father had to wait for me at the bus stop and accompany me home. And the children would harass me even more, making fun of him: ‘Ha ha! Look at that old man with a cane.”

Figgers’ father, Nathan, was 74 and his mother, Betty May, 66 when they took him in.

They had children of their own and had taken in dozens of other children over the years – many of them while their own parents were in prison – and had planned to stop as they were old.

He had no one who wanted him, so they adopted him and raised him as their own.

“He told me: ‘I’m going to tell you bluntly. Your biological mother abandoned you And since me and Betty didn’t want to send you to foster homes, we adopted you. ‘ I felt like trash and I always remember him grabbing me by the shoulders and saying, ‘Never let that upset you.’

“My parents gave me all the love that anyone could ever want. They did everything for me. I never felt the need to search for my biological family because my mom and dad, my Betty and my Nathan, they were everything to me, and I loved them.”

“They are great people. They taught me to be of integrity, to always do the right thing, to never forget my origins. I saw my father always helping people, stopping on the way to assist strangers, feeding the homeless.”

“He was an incredible man and I want to be like him.”

From trash to treasure

Nathan had two jobs, as a maintenance worker, Betty May was a farm worker and, although they did not have much money, when Freddie was 9 years old they bought him a gift that changed everything: a Macintosh computer … broken.

“On the weekends I would go with my father to do what we called ‘garbage diving’, wandering around different neighborhoods looking for things that people would have thrown away, as the saying goes: what for one man is garbage, for another is a treasure”.

“I have always been fascinated by computers. I dreamed of a Gateway computer but we couldn’t buy it. ”

On that occasion, his father took him to a second-hand store where they convinced the salesman to sell them an old and damaged computer, for which they paid US $ 24.

“I was happy. Since it wouldn’t start, I took it apart and realized that a component was broken and everything flowed naturally. My father worked in maintenance and had many things at his disposal, such as welding guns, radios, watches.”

“I took parts of a radio clock and soldered them and after about 50 tries I finally got the computer to work. It was then that I knew that this was what I wanted to do in my life”.

“That computer erased all the pain from bullying. While they teased me at school, I thought how much I wanted to go home to play on my computer. ”

“I learned to code when I was 10 or 11 and started writing basic programs. It was then that I started to move forward ”.

Shortly after learning the language of computers, he got his first job. At 12 years of age.

“I attended an after-school program and spent it in the computer lab.”

“There wasn’t a computer technician so when a machine stopped working, they unplugged it and stacked it with the other broken ones. I would take them and replace the damaged parts of one with the good parts of the other ”.

At that time, the executive director of the program was the Mayor of the City of Quincy and when she saw what Freddie had done she was amazed. He asked his parents for permission and took it to the town hall.

They had dozens of broken computers there and Freddie dedicated himself to fixing them by going every day after school. They paid him $ 12 an hour, but “It wasn’t so much about the money, I had a lot of fun!”

Three years later, when he was 15 years old and still working for the municipality, a firm offered a program to monitor water pressure meters for US $ 600,000. Officials thought it was a better idea to entrust it to Freddie, who created the program they needed for the same salary they had been paying him.

It was then that he made a decision.

“By then, school was boring me so I decided to quit and start my own business, although my parents disagreed.” 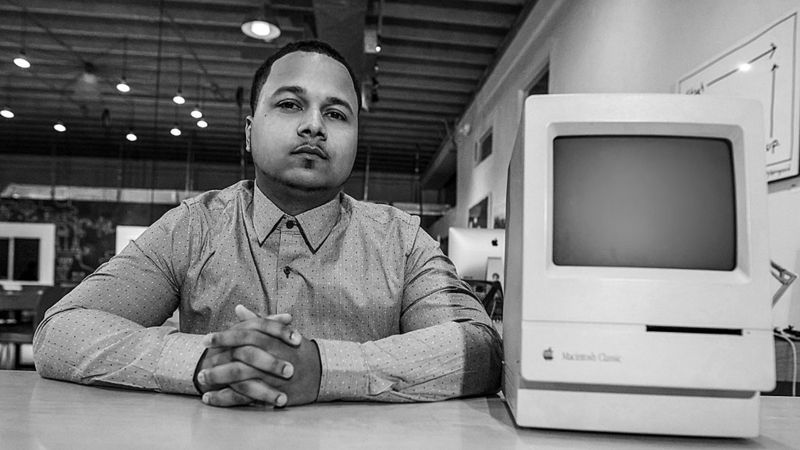 When Freddie was 17 years old, Nathan, his father, fell ill with Alzheimer’s.

“I remember one night we went to sleep after watching a cowboy movie that he liked a lot, and at two in the morning he woke me up, rifle in hand, convinced that I was the hero of the film, telling me I had to go from the city. I managed to take the rifle from him and put him to bed but the next morning he was gone ”.

“He left the house thinking they were chasing him and sometimes he forgot to put on his shirt or pants, but I noticed that he never stopped putting his shoes on, so I opened their soles, put a circuit on them, with a microphone, a speaker and a wide-range network card and integrated that with my laptop ”.

“This was all before Apple or Google Maps existed, so I integrated it with Tomtom so that when my father disappeared I could press a button on my computer and ask him where he was.”

“So he would answer me ‘I don’t know where I am’, as soon as he said something I could tell if he was standing, sitting or lying on the floor.”

The GPS he had created also allowed him to know exactly where Nathan was.

The time came when the family began to insist that he be placed in a nursing home, but Freddie would not allow it. He carried it with him everywhere.

“He didn’t abandon me, so I wasn’t going to abandon him.”

A few years later, Freddie sold the smart shoe technology he had created to take care of his father for more than $ 2 million. But it was around this time that Nathan’s health deteriorated and he died. Little Freddie started making his way into the world from an early age.

Freddie could never buy him the car and the fishing boat he liked.

“It was then that I learned that money is nothing more than a tool and I decided to do everything possible to try to leave the world better when it is my turn to leave, because my father, without being rich, had an impact on the lives of many people, and I wanted to do the same”.

And he had a plan: to launch a telecommunications company because he had detected a gap in the market: large companies did not invest in rural areas like the one he lived in – North Florida, South Georgia – so there was no infrastructure to They will enjoy fast connections.

“Most of the people were still using internet dial-up to access the internet. So, after 394 attempts, the FCC finally granted me a license. ”

The FCC is the Federal Communications Commission, an independent state agency of the United States, under the direct responsibility of Congress. The FCC is responsible for the regulation (including censorship) of interstate and international telecommunications by radio, television, wireless networks, telephones, satellite and cable.

When Freddie finally received his telecommunications operator license, at age 21, he became the youngest person and the only African American to obtain it.

Freddie began by installing fiber optic cables and building telephone towers with his bare hands to forge a firm, Figgers Communications, valued at tens of millions of dollars.

But it’s what you do with your earnings that sets you apart.

The Figgers Foundation offers scholarships for African American students and contributes with disaster relief. During this pandemic it has been supplying personal protective equipment and digital learning tools for disadvantaged children.

Freddie, for his part, continues to invent health products, such as the smart shoes he made for his father. 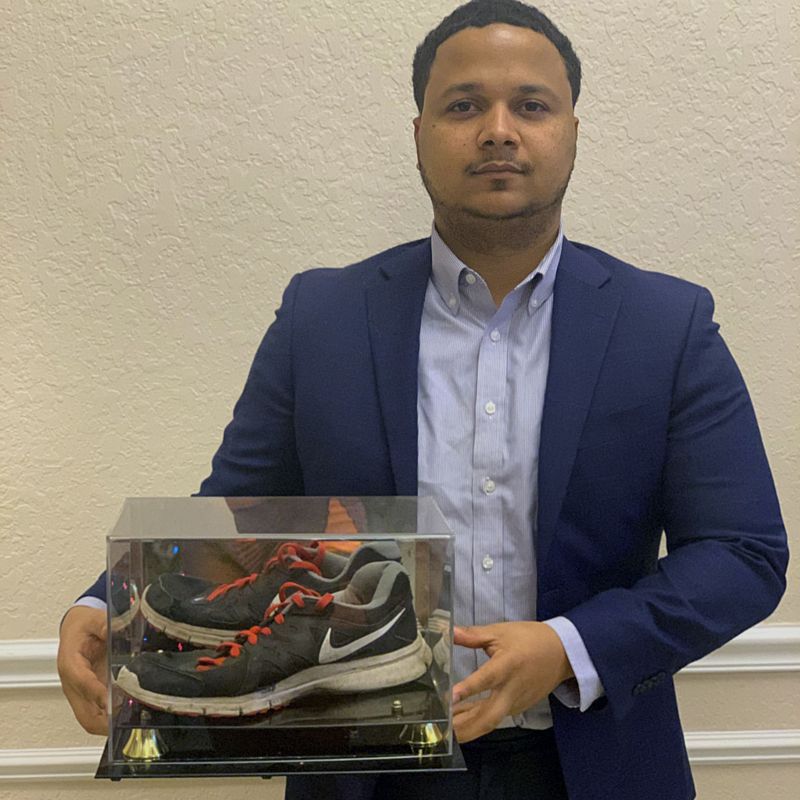 His dad’s shoes became a means of communication and a device to locate him.

The inspiration for another of his inventions was another traumatic experience he had when he was 8 years old, when his parents went to visit Betty May’s uncle and found him dead from a diabetic coma.

14 years later, created a program to try to avoid these types of deaths.

“Diabetics were targeting their blood sugar levels but in rural areas, like South Georgia where my mom’s uncle lived, there was no one to check in regularly. So I created a smart glucometer that, after taking the measurement, shares it with your phone, your doctors, your family members and your insurance company, so that if something is abnormal, send an alert ”.

Your advice to others ?: “Don’t let your circumstances define who you are and give other people opportunities”.