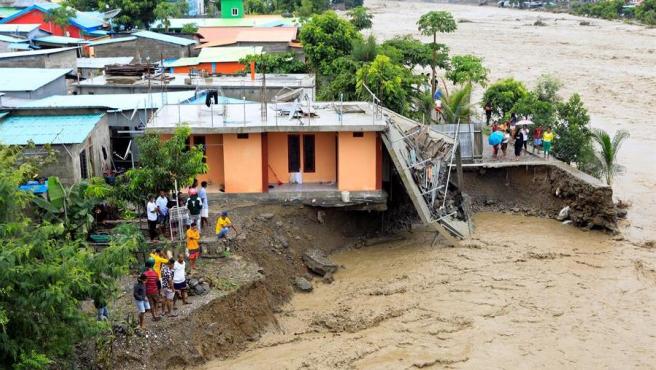 At least 90 dead from floods in Indonesia

Iran rejected on Thursday the resolution adopted by the International Atomic Energy Agency (IAEA) criticizing him for his lack of cooperation, a new disagreement that distances the prospect of a solution on the sensitive issue of the Iranian nuclear agreement.

“Iran condemns the adoption of the resolution presented by the United States, the United Kingdom, France and Germany at the meeting of the Council of Governors of the IAEAwhich is a political action, not constructive and incorrect”reads a statement from the Ministry of Foreign Affairs.

This criticism directed at Iranthe first since June 2020, was approved on Wednesday by 30 of the 35 members of the Board of Governors of the IAEA. Only Russia and China voted against, while India, Libya and Pakistan abstained.

The resolution was passed after the Vienna-based IAEA raised concerns about remnants of enriched uranium found at three undeclared nuclear plants in Iran.

“The adoption of the resolution, which is based on the hasty and unbalanced report of the IAEA director general and on false and fabricated information by the Zionist regime (in a reference to Israel, ndlr), will only weaken the process of cooperation and interaction between the Islamic Republic of Iran and the Agency”, the ministry stressed in its statement.

“Iran has taken reciprocal measures due to the non-constructive approach of the Agency and the adoption of the resolution, including the installation of advanced centrifuges and the deactivation of the cameras”said the Iranian nuclear authority.

Iran’s nuclear power agency said in a statement Wednesday that switched off some of the IAEA cameras that monitored its nuclear facilities, including those controlled by the Online Enrichment Monitor (OLEM).

The “most transparent in the world”

Iranian Foreign Ministry spokesman Saeed Khatibzadeh criticized the resolution in a message on Twitter, saying that Iran had “the most transparent peaceful nuclear program in the world.”

“Initiators are responsible for the consequences. Iran’s response is firm and proportionate.”he added.

After the approval of the resolution, France, Germany, the United Kingdom and the United States called on Tehran to “respect its obligations” and cooperate with the IAEA.

“And Iran delivers on this and if the CEO is able to report that the outstanding issues on guarantees have been resolved, we will no longer consider it necessary for the Council to meet or take action,” he added.

Iran concluded a deal with world powers in 2015 to limit its nuclear program in exchange for sanctions relief, but the deal has been moribund since former President Donald Trump unilaterally withdrew the United States from the pact in 2018 and reinstated sanctions against Tehran. .

A year after the harsh new punitive measures, Iran began to renege on its commitments under the agreement.

Talks to revive the nuclear deal began in April 2021 with the goal of bringing the United States back, lifting sanctions and getting Iran back to the limits it had agreed to for its nuclear activities. But negotiations have stalled in recent months.

According to Eric Brewer, an expert at the US Nuclear Threat Initiative (NTI) research institute, the decisions of the Board of Governors “could make things dramatically worse.”

Specifically, the expert fears that the decision to stop the operation of the cameras complicates the IAEA’s monitoring and allows Iran to increase its enrichment capabilities and accumulate enough material to make a bomb.

From January 2021, Iran It has suspended part of the inspections of the IAEA, in charge of monitoring the peaceful nature of the nuclear program, and cut off access to surveillance instruments, arguing that it will transmit the images once the negotiations are concluded.