Carolina Cruz told why she goes from ‘Day to Day’ temporarily

This Wednesday, May 12, new protests have been called in the framework of the National Strike throughout Colombia. For this reason, Transmilenio delivered a balance of the damages that its system has as of May 11, and also announced which stations will not be enabled today during the new day of demonstrations in Bogotá.

As reported by the mass transportation system of the capital of the country, as of this May 11, of the 2,357 trunk buses that operate in Transmilenio, 592 have presented some type of affectation, while 5 these are not operating due to damage.

Regarding the SITP zone buses, Transmilenio reported that on the same date, partially, they registered that of the 6,200 buses that they have, 347 have been damaged, and of these, 5 have been incinerated. In total, 42 are not working due to the damage they present.

Transmilenio also pointed out that to date, the amount for damage to infrastructure, buses and technical equipment of the mass transportation system of the country’s capital, has already risen to $11,000 million pesos. 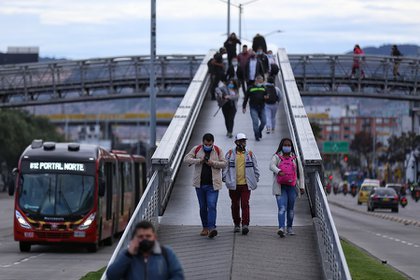 According to Transmilenio, the damages to the system during the days of demonstrations already amount to $ 11,000 million pesos.

Taking this scenario into account, Transmilenio reported that due to the damage that has been registered in the infrastructure in recent days, during the days of protests in Bogotá, in total there are 50 stations that will not operate this Wednesday because they represent a risk for their users, while another 6 will work partially.

6. Ricaurte (works only by the NQS)

Keep in mind: Transmilenio reminded its users that the number of inoperative and partially enabled stations during this Wednesday, May 12, may increase, taking into account that the mass transport team still continues to verify the damage that the trunk lines have received during the last hours.

Bogotá’s mass transportation system reported in recent hours that millions of Bogota citizens have been affected by the demonstrations in the city. For this reason, Transmilenio announced that the money for the tickets will be returned to those users who validated them but were unable to access the articles due to protests and blockades.

Those who meet this condition and want the system to return their money, will have to call the lines 195- 4824304 or 2203000, or the page https://bogota.gov.co/sdqs/, and deliver your personal data: name, card number, station of origin, station of destination, as well as the approximate time and date when you entered the system.

Once Transmilenio validates the information and determines that it was indeed affected by the protests in the city and could not use the system, they will automatically recharge the value of your card.