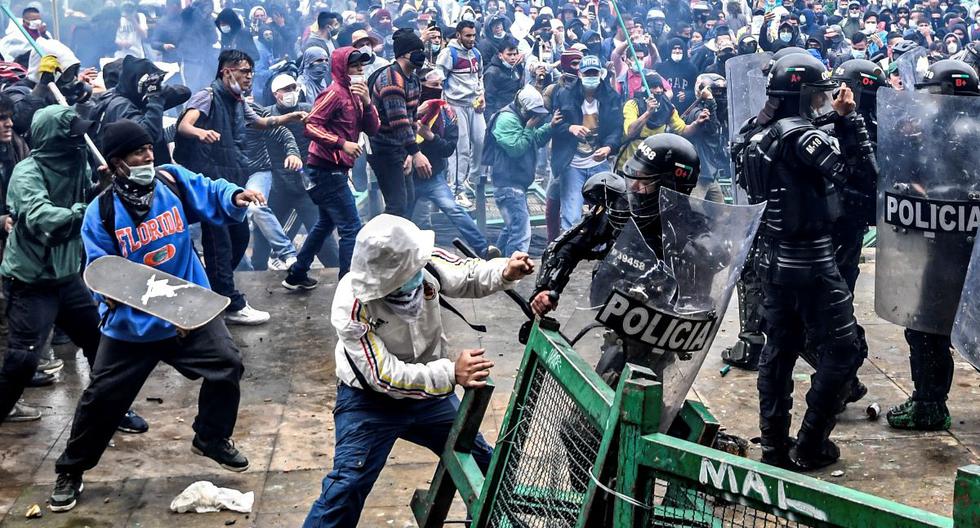 Colombia: At least 27 dead and 359 disappeared due to the repression in the Protests against Duque, confirms the Prosecutor’s Office

The statue of Christopher Columbus in the colombian city Barranquilla (north) was torn down this Monday by protesters, in a new day of protests in the country, the Police reported.

The director of the Colombian Police, General Jorge Luis Vargas, told reporters that this monument and another in the town of Santander de Quilichao, in the troubled department of Cauca (southwest), “they were attacked by criminals.”

The group that brought down the monument in Barranquilla He put a hood on the statue, a rope around his neck, they tied ropes and pulled it until it knocked it down, while they shouted “Colón murdero”.

Later, on the ground they proceeded to tear off his head and write with spray paint captions such as “for our dead.”

The mayor of Barranquilla, Jaime Pumarejo, said that “violence only generates more violence. I invite you to shed your hatred and build a better country”.

The president added: “We have not repressed and we will not repress peaceful protest, but we will we order to continue identifying, capturing and prosecuting those who commit acts of vandalism and terrorists”.

The demonstrations in Colombia have been characterized by attacks on monuments and statues of historical figures, including the conquerors Gonzalo Jiménez de Quesada in Bogotá and Sebastián de Belalcázar in Cali.

In Barranquilla – Colombia, the statue of a certain Cristobal Colon fell. Instead a wiphala waved. pic.twitter.com/cym9mS0uSa

Even in Bogotá the bronze statues of Isabel la Católica and Cristóbal Colón, located near the El Dorado international airport, were removed from their pedestals after indigenous people of the Misak ethnic group tried to tear them down.

The mobilizations in Colombia started on 28 of April against a project of reform tributary of President Iván Duque.

According to human rights organizations, the demonstrations, which in recent weeks have lost intensity until they have diminished and almost disappeared, leave some 74 fatalities, at least 20 of them due to police shootings, while the Government links the protests to 25 deaths and only three by the Police.

The Columbus monument, which was located in a central neighborhood of Barranquilla, was made by the Tomagnini de Pietrasanta company and donated to the city in 1892 by the Italian colony in order to commemorate the four hundred years of the discovery of America.

However, the statue was not installed until 18 years later on what was then the main street of the city, which took the name of Paseo Colón. Then it went to the Plaza de San Nicolás de Tolentino and in the mid-90s the current place, in front of the Church of Nuestra Señora del Carmen in the Boston neighborhood.