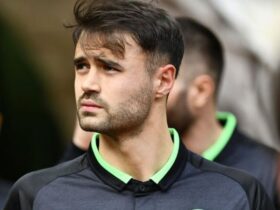 Unbeaten and unbeaten in his games with Espanyol, this season Oier Olazabal is indisputably the goalkeeper of the Cup. He saved a penalty against him Llagostera, except for a goal sung in Burgos y dwill defend the goal of the RCDE Stadium this Sunday against Osasuna. His professional career, and by extension his landing a year ago at Espanyol, could not be understood without an old acquaintance, equally mythical, of parakeets and red-bellied birds: Vicente José Biurrun.

Biurrun, goalkeeper between 1983 and 1986 of Osasuna, which with him as the starter, competed for the first time in its history in Europe, and of Spanish from 1990 to 1994, exalted first as the ‘Chopo’ of Sarrià and ultimately overshadowed by a thriving Toni Jiménez, was the one who changed the course of Oier. Being youthful today the parakeet player, in 2007, Biurrun warned his good friend Juan Carlos Unzué, then Barcelona goalkeeper coach, of its existence. Oier played in the National Youth League with his hometown team, the Royal Union of Irún, another nod to Espanyol for being the team against which they played the first game in LaLiga history.

But the story, even as a stone guest, also includes Osasuna. The adversary cupbearer of this Sunday was also the adversary of the Royal Union the day that Unzué, following Biurrun’s advice, sent to Irún two goalkeeper trainers from the Barça youth academy, Carlos Busquets and Ricard Segarra. They were convinced by his performance and he was convinced by the plans they had for him. As soon as he landed in La Masia, he would become the owner of Pep Guardiola’s Barcelona B, in Third, and in the Frank Rijkaard’s third Barça goalkeeper.

Biurrun would be for years the representative of an Oier who he had to fly to feel like a starter, and this is how he went through Granada, Real Sociedad and Levante before arriving at Espanyol where he assumes his condition although he tries to make things difficult for Diego López in opportunities like the one he will have this Sunday against Osasuna, in a return to his beginnings.