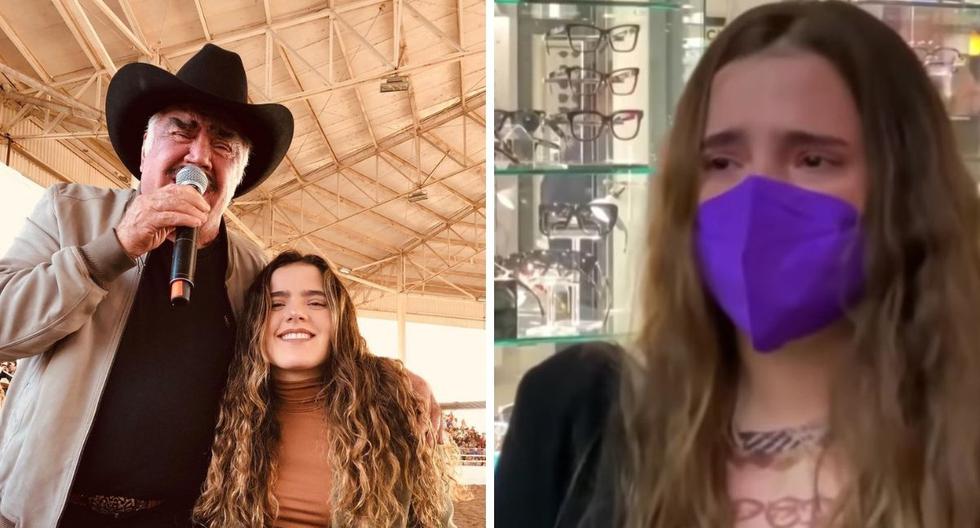 Vicente Fernández: his granddaughter cries and asks to pray for the Mexican singer

They are already making the preparations for the wedding and the official delivery of the engagement ring has already been made.

With the death of Valentine Elizaldemany hypotheses have been being woven regarding who would have been responsible for this fact that mourned the family of the Mexican singer; However, his widow Gabriela Sabag has surprised many after it became known that he will marry Fausto ‘Tano’ Elizalde, the deceased’s cousin.

It has been 15 years since it was known that the singer Valentín Elizalde Valencia was murdered by a person whose whereabouts are still unknown, but despite this, his music and his charisma is remembered by many people.

The musician was born in Jitonhueca, a town located in the municipality of Etchojoa ( Sonora ) where he lived during his childhood and began to work selling music cassettes in the palenques. Then he would move to Guadalajara (Jalisco), and later to Guasave (Sinaloa) where he lived for some years with his father Everardo Elizalde and his brothers.

It was in 1998 when he debuted as a singer in Bácame Nuevo, Sonora, and his first stages were at a party. The singer was also a composer of several songs of various styles within the Sinaloan tambora tradition.

WHO WOULD BE ALLEGED RESPONSIBLE FOR THE DEATH OF THE SINGER?

Many questions arise about this case to find the person or persons responsible for the crime. However, according to the portalUnivision, Valentina Elizalde, daughter of the deceased, pointed out that one of the people involved in this event would be her uncle Fausto ‘Tano’ Elizalde.

“He planned everything about my dad, the day, the date, so that what happened to him will happen to him ,” he told the program ‘First hand’.

To this version is added that of Marysol Castro , the musician’s ex-wife, who -according to Univisión- in an interview for ‘Ventaneando’ in 2020 said that her ex-husband may have been involved in the crime of his cousin.

“ That day Tano was very nervous, he didn’t want to go. It was he who seized that date, his nervousness I do not understand (…) Vale did not want to go to Reynosa (…) That day Tano did not stay with him to sign autographs “ , he recalled according to Infobae. However, the main suspect has denied these accusations.

THE MARRIAGE BETWEEN FAUSTO ‘TANO’ ELIZALDE AND GABRIELA SABAG

Another fact that has caught the attention of the population is that Fausto ‘Tano’ Elizalde maintains a relationship with Gabriela Sabag , the widow of Valentín Elizalde , this occurs after the rumors about it that months ago began to sound strongly.

Thus, in an interview with the program Sale el Sol , the singer was able to confirm that he will marry his cousin’s widow.

“I want to tell everyone that I already gave her the engagement ring in Ciudad Obregón, Sonora. Soon to get married, we are going to let all of you know, with great pleasure, “he said.

He specified that he has a stable relationship with Sabag and she ” found happiness and the desire to get ahead .”

WHO IS GABRIELA SABAG?

Gabriela Sabag, Fausto Elizalde’s widow and current girlfriend, was married to Valentín Elizalde since 1999, when they were both 19 years old. Due to this love affair, his daughter Gabriela was born later.

After the death of the renowned Mexican musician, Sabag was left as her sole executor. Shortly after, the cousin of the deceased would contact her to negotiate the rights of the life of ‘El Gallo de Oro’ to carry out the bioseries “The truth of my Tano”.

For some, this was the beginning of their controversial relationship that continues to this day and could soon reach the altar.

OTHER SINGERS WHO WERE ALSO KILLED

The “Queen of Tex-mex” was only 23 years old and at the peak of her career when the president of her fan club, Yolanda Saldívar, ended her life on March 31, 1995.

Saldívar was in charge of managing several of Selena’s businesses, including a beauty salon and several clothing stores where the singer sold her own designs. The relationship between the singer and the former nurse began to break down when suspicions emerged that the woman was embezzling money from businesses.

On May 15, 1992, Chalino Sánchez, also known as “El Rey de los Corridos”, gave a presentation in Sinaloa, and halfway through his song “Alma enamorada” he received a death threat note.

After leaving the show and while he was traveling in his truck, a group of armed people intercepted him. The men introduced themselves as policemen and said their commander wanted to speak to the composer alone. The singer of “Snows of January” did not want to put his companions at risk, so he accepted willingly and left with this group.

The following day, the body of Chalino Sánchez was found in a water channel; his wrists and ankles were tied, and he was blindfolded. He had been shot twice in the back of the head.

Marco Antonio Silva de la Barrera, better known as Tony Barrera, was a Mexican DJ who became popular thanks to the group “Polymarchs”, which used audio and lighting equipment. On May 26, 1998, he was found dead in his apartment. Tony was half naked, strangled and with signs of physical and sexual violence.

At first it was thought that the murder was related to a debt, but to date the exact motive is unknown.