Serena Williams’ message of support for Meghan after explosive statements

The reggaeton player learned about the wonders of the history of this region. Among camels and pyramids, Osmani lived an unforgettable experience, as he made it known on his social networks.

“The perfect place is where you are with me,” wrote the reggaeton with a photograph with his partner.

He had previously shared a video where he narrates how the journey and the camel rides have been until he reached the pyramids. “We don’t know if it’s because of the sun or because of the altitude, here our heart is pounding,” he says during the recording.

Since Osmani García began his relationship with Laura, he has stayed away from controversy and has had the opportunity to rub shoulders with celebrities from the world of music. 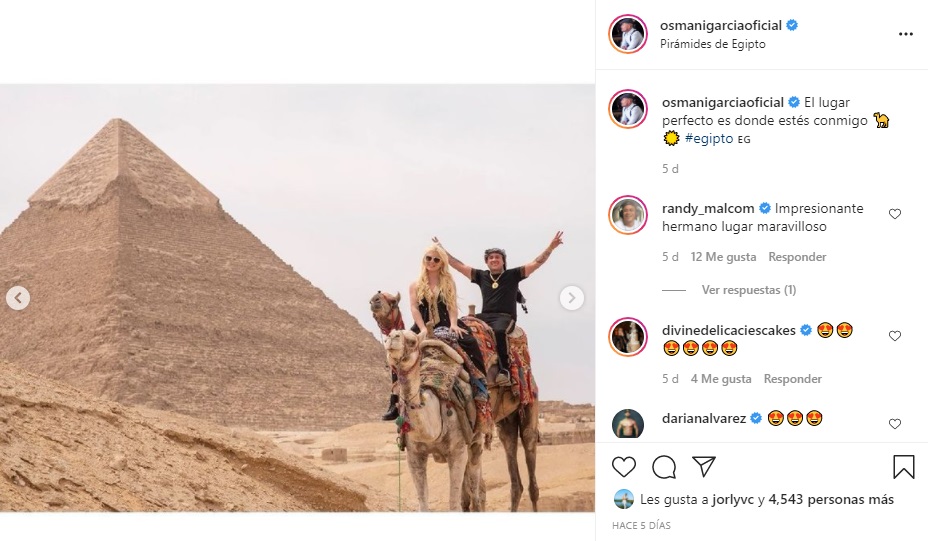 Last February, Osmani García tried to make himself felt at the birthday party of the Colombian singer Maluma, an event in which he took selfies with the guests and other photos in which Pretty Boy himself appeared in the distance.

Some images were shared by the presenter Alexander Otaola, who alleged that Osmani would surely have sneaked into the party as an assistant to his girlfriend Laura, in charge of the birthday cake.

“Osmani is an assistant to his girlfriend, the girl who makes the best cakes in Miami,” he said. “When I saw it I said, something is coming between Osmani and Maluma, a collaboration. Suddenly, I realize that no, Osmani was slipping into the party”, mentioned the host of Hi! Ota-Ola.

In the images you can see Osmani García behind Maluma’s back, recording this moment of closeness. However, the Cuban reggaeton did not have the opportunity to take a picture with the Pretty Boy.

The interpreter of The taxi posed with some celebrities from the entertainment world, such as urban singer Nicky Jam. Another of the photos was with the bachatero Prince Royce, as well as with the journalist and presenter of Telemundo, Rodner Figueroa.

All about Osmani García’s new relationship

The Cuban reggaeton seems to have found a new love. The popular singer took a new turn in his life a few months ago, accompanied by a beautiful young woman.

Her name is Laura, she lives in Miami (Florida) and owns a thriving pastry business with which she has managed to attract attention and create beautiful custom cakes for artists and international celebrities such as Jennifer López, Natti Natasha, Lele Pons , Britney Spears, Lili Estefan and many others.

Last December, Osmani García made his relationship with Laura official through a publication on his Instagram account made up of several photographs of the young woman.

The words that the urban singer added to his post showed the sweet moment he was living and how excited he was after having decided to join his path to that of his “only queen.”

“It’s official: Laura. My only queen. The Universe with your love answered all my complaints, claims and questions … and left me speechless. I don’t need to know anything else that you love me to be infinitely happy, now I understand everything”, expressed the reggaeton player.

What Geraldine Bazán said about her aesthetic operations