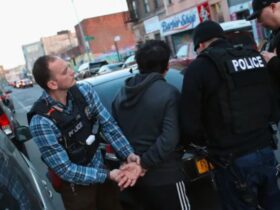 COLORADO SPRINGS, Colo. — A judge has declassified a case involving a suspect in the shooting at a gay club in Colorado Springs, in which he threatened to become “the next mass murderer,” plus one year before the event in which five people died and 17 were injured.

Anderson Lee Aldrich is a suspect in the massacre last month at the Q Club in Colorado Springs. But in June 2021 he had been arrested on charges of making a bomb threat, a case that led to the evacuation of about 10 homes.

Judge Robin Chittum said the “deep” public interest in the case outweighed Aldrich’s privacy rights. She added that scrutiny of criminal cases is “fundamental to our system of government.”

“The only way for that scrutiny to happen is for this to not be classified,” he added.

Aldrich, 22, who uses the pronoun they and is non-binary according to his lawyers, threatened to harm his own family and boasted of bomb-making materials, ammunition and multiple weapons, according to police documents. He was jailed on suspicion of felony threat and kidnapping.

The case was later dropped and to date authorities have refused to comment on what happened, citing a state law that requires dismissed cases to be classified.

The judge’s order to release the records comes after news organizations, including The Associated Press, tried to have the documents released.

Aldrich’s alleged statements that he intended to become “the next serial killer” predicted last month’s mass shooting and raised questions about why authorities did not try to seize Aldrich’s weapons under the “red flag” law of Colorado.

Aldrich was also the subject of an alert received by the FBI one day before the bomb threat. Agents closed the case a few weeks later.