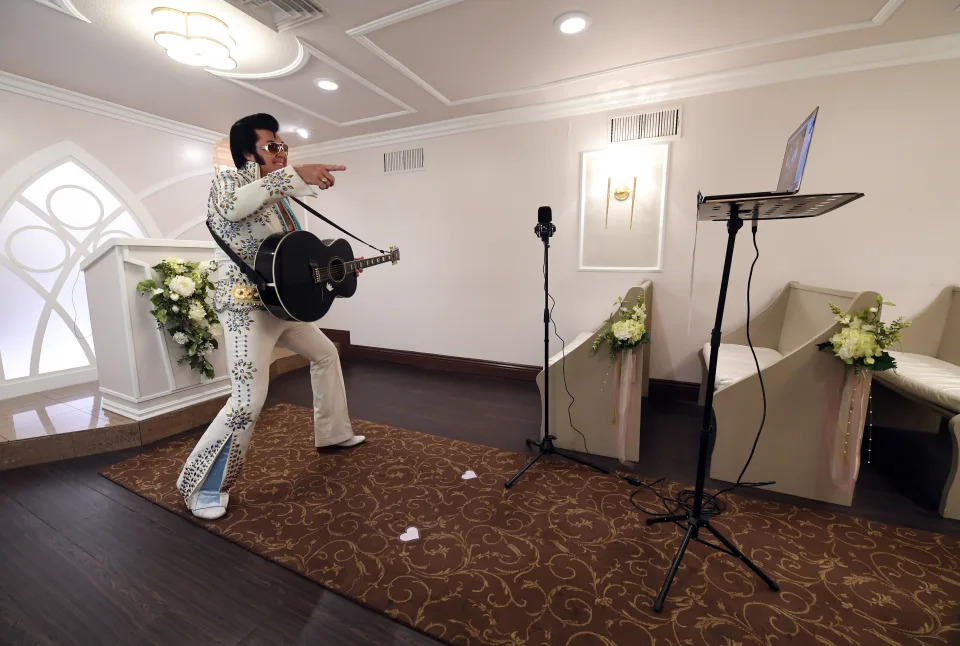 Weddings officiated by Elvis Presley in Las Vegas, on the tightrope

María Aguiar had faced several years of domestic violence at home when she finally steeled herself and decided to leave her abusive husband in 2008. It was difficult for her to make the decision since as a mother of four children, owner of her house in the city ​​of Santa Ana and with stable employment, the change would affect everyone.

However, the situation with an alcoholic husband was so unpleasant that although she was not physically abused, her verbal abuse was consuming her after almost 20 years of marriage.

“But the time comes when you say, you can’t anymore because you’ve been living like this for years,” said Aguiar, who is now 53 years old.

She had a good job in Orange County and asked for a few days of vacation. She had an operation that was not very serious, but as soon as she left the hospital she took her two youngest children, ages 13 and 4, and left never to return.

Shortly before, she had already started a plan to divorce her husband, although she did not dare to take the main step, which was to leave home.

Initially, she was hesitant to leave her home, which they had purchased as a couple. This one had three properties and seemed to be a good investment. However, the abuse was much greater than her Aguiar she decided to leave without thinking about it.

“I left everything in my house. I started from scratch,” Aguiar said.

That was how she first came to the Women’s Transitional Living Center, Inc. (WTLC), in the city of Fullerton, where she opened the doors of the emergency shelter.

The WTLC is located in downtown Fullerton, where Fullerton Hospital was many years ago. It currently functions as a resource center for people suffering from domestic violence and human trafficking, but until a few years ago it was the emergency shelter where Aguiar arrived.

She recounted that she was immediately given a room to share with two other women. Although her 13-year-old daughter was hesitant to stay out of her home, her youngest child was happy to sleep in a new place away from the yelling and verbal abuse.

“I lasted a month and a half in the shelter…, at that time I took advantage of all the programs they offered,” she said. “I had to pluck up courage for my kids, he was an alcoholic and it wasn’t healthy for them to be living like this.”

Once she was moved to transitional housing. She there she lasted eight months before receiving a house considered permanent.

“That was the moment when I became independent and to date I feel that it has been a very tremendous and favorable process,” said Aguiar.

Last week she returned to support the organization that gave her so much help in her moments of desperation and fear; In addition, her young mother, who seems very sure of herself, also celebrated the work that the organization continues to do with more people.

WTLC is the oldest domestic violence program in Orange County and the third oldest in the nation. On Thursday, it held its annual open house for various entities, groups and individuals to see the work they do and how they can help survivors of domestic violence and human trafficking.

The organization was founded in 1976 as a result of a needs assessment study of battered women in Orange County. By 2017, WTLC moved its shelter program to a secure location not open to the public, while the original building, located on Amerige Street, became the current WTLC center.

This place can be reached both by survivors to seek out the housing program and by the community to access the services they need to establish a safe life. Services now reach more than 1,100 survivors in the community each year, a population that was previously underserved.

The center has several offices, as well as individual, group, adolescent and children’s therapy rooms as well as court-supervised visiting rooms for when parents want to see their children.

She got help and now she’s back as a pro

Another guest who came to the WTLC center was Yanira Casasola, a woman who since last April has visited the center once a month to provide free dental services to survivors assisted by the organization.

Ella Casasola said that she has great appreciation for this organization. She was around 9 years old when she came to her mother for help after facing years of domestic violence at home.

“It was my mom, my two sisters, ages 1 and 2, and me,” Casasola said. “I don’t remember everything very well, but I do remember that this is where we came to live and it was a place where I felt safe.”

The 33-year-old explained that the domestic violence was on the part of her father, who forced them to constantly move from home. Sometimes the most they had was only one room.

“And here [at WTLC] we had a kitchen, a play area and a lot of rooms. I saw that the stability was very good”, recalled Casasola, who was able to continue her studies despite her abuse. “This was always a very safe and comfortable place for me. Here I had that home atmosphere, something we didn’t have before.”

Her mother receiving a more stable home allowed her family to stabilize a little more. She was able to continue her studies and qualified as a health provider with an emphasis on dental hygiene. She added that she is now very passionate about helping and providing services for the population with fewer resources.

“Mainly with Latinos who don’t have adequate information because I experienced it. I think when they are moving very often the last thing they think about is visiting a dentist,” she said.

Like Aguiar, Casasola stressed that the center brought back very good memories and through her profession she hopes to continue helping for many years, mainly to the people who need it most.

She added that she tries to get to the center about once a month and it gives her great joy to be able to give something back to the place that helped her so much.

“I think when you’re a professional and you learn to give something back to your community, your job is not just a job, it’s a job with a purpose,” she said.

She explained that the center has an emergency shelter and temporary housing apartments.

These homes are one-bedroom apartments where two families usually fit and live for a period of approximately 50 days.

“When families are ready to move to a single home, we support and help them,” de la Torre said.

WTLC offers them security planning, as well as the necessary tools to face each situation.

We also help those who cause harm in situations of domestic violence and human trafficking. Additionally, last year alone the WTLC helped 21 veterans with post-traumatic stress disorder (PTSD) and other issues related to domestic violence.

The WTLC is currently building Hope House, a freestanding four-bedroom house, all adjacent to the center, that will accommodate 16 to 20 survivors for up to 24 months. Survivors will not pay a dime out of pocket to live there and will receive the necessary resources to become fully independent again.

De la Torre said that all of these services are funded through grants and donations.

People who need help and for whatever reason cannot stay at the WTLC center are referred to any of the other seven Family Resource Centers in Orange County.

To learn more about WTLC and its services visit: www.wtlc.org