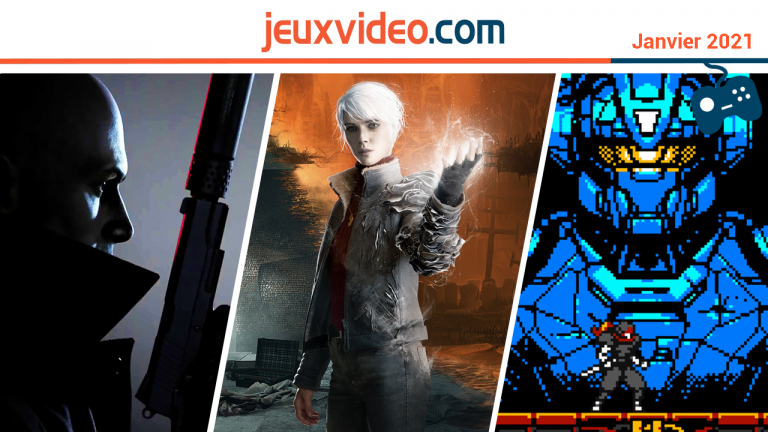 With this brand new month, the Xbox One and the Xbox Series X | S from Microsoft are offering players a particularly packed program by unveiling no less than ten new productions. You will simply have the choice between sports simulations, an action-RPG, FPS and beat’em all which have already proved their worth. Now, place to our selection!

We therefore find everything that made the flavor of the title, starting with the return of its difficulty legendary, but of course this Ghost ‘n Goblins Resurrection also consists of a myriad of new features. The platformer therefore adds a skill tree, a cooperative mode and above all an option to obtain unlimited lives, ideal for allowing the youngest to enjoy the experience.

DOOM Eternal has been there, and it shows! After giving players Necromunda: Underhive Wars, a particularly disappointing tactical RPG, the Warhammer 40,000 universe is now taking on fast-FPS with Necromunda: Hired Gun.

This new episode therefore changes its tune and now offers high-powered combat (handgun), where it is possible to run on walls to reach once unattainable enemies, to use your attack dog to fight. place in the opposing camp, or to use a devastating arsenal to spill liters and liters of blood on the playing area.

Now all that remains is to hope that the proposal lives up to the various trailers shown here and there.

Hop, hop, for this fourth proposal, we invite you to put on your best cycling outfit and get on a state-of-the-art racing bike in order to welcome the Tour De France 2021 as it should be.

Yes, after a 2020 Season still adding two beautiful new features (the first person view and a more affordable time trial mode), the production of Nacon returns with a 2021 formula. The latter will also bring a brand new game mode named My Tour.

With this new feature, players will be able to create their own Tour entirely by selecting, for example, many stages among the 89 available.

After Necromunda: Hired Gun, another FPS is coming to Xbox One and Xbox Series X | S at the start of June, and, as you guessed it, this time around it’s Sniper: Ghost. Warrior Contracts 2. The title of CI Games takes again what made the success of the very first opus released on November 22, 2019 and takes the opportunity to improve all aspects.

Infiltration and shooting in semi-open maps are therefore still on the program, but to this is also added ultra-long range sniping. Game sequences that allow players to act like real snipers by eliminating targets several kilometers away from their position.

Of course, like the Sniper Elite saga, Sniper: Ghost Warrior Contracts 2 will once again offer breathtaking killcams, and that’s good, since the game developers are already insisting on the fact. that the title will offer a 4K display on the best gaming platforms on the market.

As you can see, FPS are popular. Except that here, unlike Necromunda: Hired Gun and Sniper: Ghost Warrior Contracts 2, we are not here to make the powder speak, but to use our magnificent sharp blade. After a first opus which caused a sensation, the Chivalry saga returns with a second chapter soberly named Chivalry 2.

Here, the formula does not change, but improves. After choosing your class, you join 63 other players on the battlefield (against 32 for Chivalry first of the name) to participate in bloody contests mixing several classes of characters.

In any case, the multiplayer proposition promises to be daunting! The closed beta has already convinced us (our preview here), so we might as well tell you that we are waiting for the moment when we will dive back into this chivalry simulator. To do this, just wait until June 8, the launch date of the title on Xbox One and Xbox Series X | S.

Going through these three beat’em’all again will allow you to play as five playable characters that you have already seen in Dead or Alive 5 and Dead or Alive 6, namely the ninja Ryu Hayabusa, the hero of the saga, but also Ayane, Kasumi, Rachel and Momiji. Note that this compilation should display the 4K / 60fps combo on Xbox Series X.

On June 15, MMO lovers will be able to go on an adventure in The Elder Scrolls Online. Effectively, the popular title from ZeniMax lands on next-gen with an improved version.

So it’s up to you the Performance mode offering 60fps, the Graphics mode displaying the 4K / 60fps combo, or even the improved textures, the reworked lighting effects, the longer display distance and the reduced loading times.

Of course, this optimization patch is free for all owners of the base game on Xbox One. Also note that the same day will land on the next-gen The Elder Scrolls Online: Blackwood expansion which, as its name suggests, asks players to visit Blackwood, a colorful land of Tamriel influenced by Argonian culture.

This same extension will also be available from June 8, 2021 on Xbox One.

The imposing monsters like the Ice Giant Utaar or even the Tyrannoeil have better watch out since next June 22 arrives on Xbox One and on Xbox Series X | S a certain Dark Alliance.

What does that mean ? May Drizzt, Catti-brie, Bruenor and Wulfgar, the iconic heroes of the Dungeons & Dragons universe get ready to come together to offer players a cooperative hack’n slash. Obviously, each of these heroes will be entitled to their own abilities and many unique skills.

To maximize your chance of survival, therefore, players will have to take the trouble to help each other while properly using the different specialties of the different characters. Good news, the title will be included in the Xbox Game Pass for PC and consoles and on the Xbox Cloud Gaming from the day of its launch.

In Scarlet Nexus, an action-RPG from Bandai Namco, players will be able to go on an adventure with two characters with devilishly opposed skills. The first is none other than Yuito Sumeragi, a young man with impressive powers and from a prestigious political family.

The second is Kasane Randall, a mysterious young woman capable of facing any enemy thanks to her extraordinary power and agility. With these two heroes, the title wants to offer players two completely different gaming experiences.

To help you get an idea of ​​this new experience, know that it is currently possible to download the Scarlet Nexus demo by going directly to the Microsoft Store.

Let’s end this list with a production directly aimed at early players. Indeed, Alex Kidd, one of the greatest heroes of the SEGA Master System, will make his comeback on June 25 on Xbox One and Xbox Series X | S with the arrival of Alex Kidd in Miracle World DX .

This remaster of the very first opus of the saga will therefore be delivered with a graphic overhaul, remastered music, new levels, alternative boss fights and new game modes. But that’s not all, for the most nostalgic among you, also know that it will be possible to switch at any time between the retro and modern graphics of the game.