Ricardo Emanuel Papadopulos, the young man who ran over and killed the five-year-old boy Isaac Sus in the Buenos Aires neighborhood of Flores, and who caused serious injuries to his mother, will begin to be tried. It will be from 11 am by the Oral Criminal Court 15 of Capital Federal in charge Gabriel Vega.

The young man prosecuted and who remains in custody, is accused by the The crime of manslaughter aggravated both by the “reckless driving of a motor vehicle, and by the escape from the place of the event in ideal competition with serious negligent injuries.”

After this first day, which will be held virtually through the Zoom platform, the trial will continue for at least another three hearings scheduled for May 17, 18 and 21. The trial prosecutor will be Ignacio Mahique and the attorneys for the victims Gabriel Becker and David Berstein

The event for which Papadopulos will be tried occurred at 11:02 p.m. on Thursday, December 17, when Débora Inés Agosti and her son Isaac were crossing San Pedrito Avenue, at the corner of Directorate Avenue, and were run over by a white Volkswagen Golf GTI who was driving the now arrested.

He was circulating at that time without registration, he fled the place, and was at large for nine days until he appeared. During the trial he will be represented by the law firm Fernando Burlando. 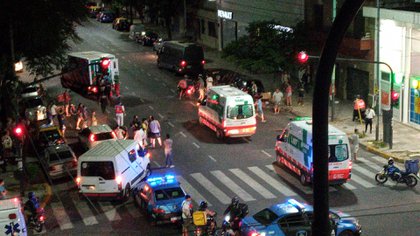 Débora Inés Agosti and her son Isaac were crossing Avenida San Pedrito, at the corner of Avenida Directory, and were run over by a white Volkswagen Golf GTI.

Two days after what happened, Rubén Ariel Papadopoulos, his father, turned himself in with his lawyers, who said he was the man who was driving the car at the 7A neighborhood police station in Flores and that it was his property.

But when it was found that he was not driving the car at the time of the accident, a huge operation was launched to find the person responsible for the incident.

From there, three police forces began to work in a coordinated manner together with two prosecutors that were almost entirely devoted to the task with raids and intelligence tasks under summary secrecy, and the investigators tried to dismantle the structure that kept him in hiding. . 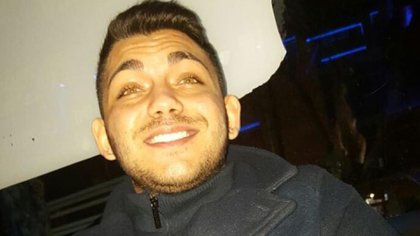 The young man is accused of the crime of manslaughter aggravated both by the “reckless driving of a motor vehicle, and by the escape from the place of the event in ideal contest with serious negligent injuries”.

At the same time, while the search was being carried out, his father Rubén swore over and over again that he did not know anything about his son, who at this point already had an international arrest warrant.

Finally, nine days after the fact, Ricardo Emanuel Papadopulos, the 21-year-old who ran over and killed Isaac, surrendered, on the Homicide Division of the City Police, located on Scalabrini Ortiz 1350 avenue in the Buenos Aires neighborhood of Palermo.

“I was driving, I apologize and sorry”, the young man managed to say while entering the mayor’s office 14 of the city of Buenos Aires, where he was housed and was at the disposal of Judge Patricia Guichandut, head of Criminal and Correctional Court No. 62, who took the case and had ordered a day before the release of the young man’s father.

His lawyer Roberto Herrero arrived at the place minutes after 1:00 p.m. and reaffirmed that the young man “was driving the car and he ran away because he had no registration and he got scared”. In addition, he refused to reveal where Papadopulos took refuge in recent days, before appearing in court.

The legal representative of the person responsible for the child’s death gave details about the actions of his client. “The truck blocks his vision. He couldn’t have stopped because he dodges the truck, he crosses in green. The truck coming from the opposite hand goes red. When the truck passes, it picks up speed again,” he said.

“Since we took the defense we told him that he had to present himself. The boy keeps crying, he’s sorry. What will determine if there is an eventual fraud are the skills, knowing how fast the car was going, “said the lawyer.

He also explained why he did not stay in place to help the victims: “He did not stay because he was scared, he was without registration and the first thing he thought is that a child had not died. He finds out from the media”. 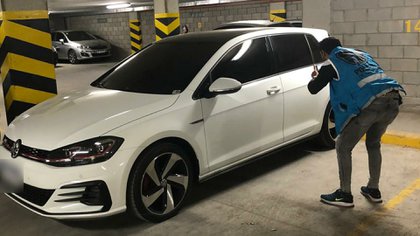 The victims were run over by a white Volkswagen Golf GTI that the now arrested man was driving.

“When we interviewed him, the first thing that was done was to explain the pros and cons that a defendant has when he is a fugitive. And we told him he had to come forward. If he had stayed in the place after the fact I think he would be at liberty,” Herrero revealed.

And he completed: “Driving without a license is a contravention. The aggravating factor itself is driving behavior without registration, whether the accident occurred or not. The companion who was with him will have to appear as a witness ”.

Finally on February 10, the Justice of the City of Buenos Aires closed the investigation and brought the case to trial.