The former bodyguard of “El Chayo”, the late former leader of La Familia Michoacana, is sentenced to 24 years in prison

During the afternoon of this Wednesday, heavy rains were registered in Mexico City, which caused flooding in the Ignacio Zaragoza road at the height of La Concordia. Given the severity of the flood, the Metro Collective Transportation System (STC) stopped providing service from Peñón Viejo to La Paz.

In addition, CDMX authorities noted that other affected areas were Eje 10 Sur and the Mexico Puebla Highway. Some viable alternatives to circulate are Av. Pantitlán, Axis 5 and 6 South, as well as the Tláhuac Chalco road.

For its part, the subway stressed that the population could make use of provisional services to reach their destinations.

Read Also:
Social media users did not take long to react, nor did they stop sharing images, both of the flooded streets, and of the crowds of people that became inside the subway.

From people in concrete blocks on the Calzada Ignacio Zaragoza unable to move due to the rain, even stranded cars, are some of the photographs that circulate on the internet.

“Those who already want to get to their homes (affected), at this time continue to walk in line on the wall of the LA subway due to flooding in La Calz. Gral. Ignacio Zaragoza in the vicinity of La Concordia. Traffic still stopped to Mexico Puebla”, pointed out a netizen.

The National Meteorological Service (SMN) warned that for the next hour they will persist heavy rains, winds with gusts of 40 kilometers per hour (km / h), electric shock and possible hail fall in the 16 mayors of Mexico City and some municipalities of the State of Mexico.

The Secretariat for Comprehensive Risk Management and Civil Protection (SGIRPC) activated Red alert for rainfall in the municipalities of Iztapalapa and Tlalpan. Given these climatic conditions, the capital city agency recommended keeping important documents in an airtight bag, turning on fog lights when driving and avoiding flooded areas.

The above to prevent associated dangers such as water currents on streets and avenues, as well as falling branches, trees and tarps. 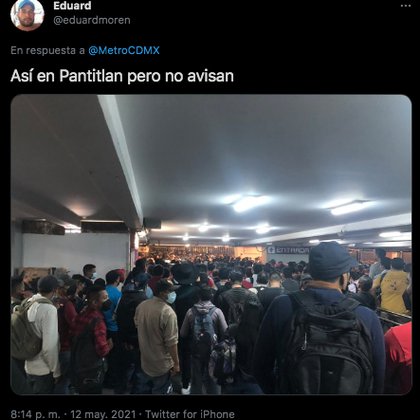 In the municipalities Álvaro Obregón, Cuajimalpa, La Magdalena Contreras, Milpa Alta, Tláhuac and Xochimilco, the Orange alert due to strengthening of rain zones and precipitation forecast until early Thursday morning.

“Tonight the rains continue to be registered in Mexico City, at the moment they are light in most parts. This condition will persist the rest of the night and early morning. It is recommended to consult the Red, Orange and Yellow Alerts, in addition to being attentive to the communications of the Multi-Risk Early Warning System”, reported the SGIRPC through its Twitter account.