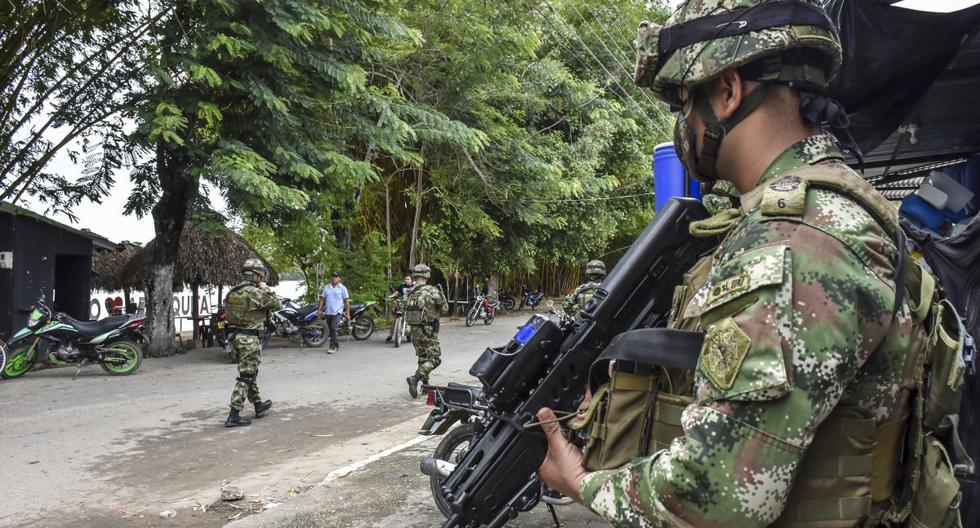 To some residents of affluent neighborhoods of Cali They are heard saying that they will not allow vandals to continue destroying the city, the epicenter of protests in Colombia. There, the scenes of armed civilians in the streets where protesters pass set off all the alarms in recent days.

Cali, the most important city in the Colombian Pacific, became an espresso pot at its maximum boiling point, besieged by social unrest, blockades in different areas that have been in place for 14 days as a symbol of the national strike, fuel shortages and food or looting and insecurity.

The special touch in this soup has been since last weekend the armed incursion of civilians in the points where those protesting against what they consider unfortunate government decisions are concentrated.

The most terrifying scene was experienced this Sunday when different videos recorded the use of automatic and long-range weapons by alleged inhabitants of one of the most exclusive areas in the south of the city against the indigenous minga (march).

On Sunday, several “chivas” (typical passenger buses in the mountain areas of Colombia) loaded with indigenous people and escorted by the indigenous guard were attacked with bullets “by an Uribista mob in conjunction with the public force,” as denounced by the Regional Council. Indígena del Cauca (CRIC), in the Cañasgordas area, in the south of the city, and at least eight indigenous people were injured.

There were even journalists who were left in the middle of the fire and were threatened “for being guerrillas.”

The Metropolitan Police of Cali, however, accused the indigenous people of looting houses and apartment blocks, and injuring four people with sharp weapons, for which, they assured, they had to go in “a call for help from the sector”.

Those who came out in defense of the armed civilians precisely allege that these people are trying to protect themselves from the blockades and looting that indigenous communities from the neighboring department of Cauca are supposedly carrying out, where illegal armed groups, the proliferation of illicit crops and a conflict armed that only gave a truce in the first year of the implementation of the peace agreement of 2016.

Indeed, in some of the areas where the most privileged families of the third largest city in Colombia live, residents say that there are assemblies to organize “civil safety nets”.

“We are not going to allow the vandals to continue destroying our heritage,” a man who prefers to remain anonymous and who reveals that among his crews there is an Uzi submachine gun, tells Efe. A weapon that, according to the price registry of the Military Industry (Indumil), reaches twelve million pesos (3,245 dollars).

In residential units, what some consider paramilitary groups are now called to organize as if it were a meeting for a children’s party. The contributions are pistols, revolvers and rifles. The service includes patrolling the streets of the neighborhoods.

It is also known of a WhatsApp group called “Cali Fuerte”, with 150 members who plan “strategies” to remove the blockades in the city.

Cali, which is also known as the “Branch of Heaven” for its friendly and festive people, is a violent city, almost by nature: in the first quarter of this year, authorities counted 243 murders, and in 2020, the rate The number of homicides was 45.1 per 100,000 inhabitants, one of the highest in Colombia.

The authorities’ reports are better explained if one takes into account that in the city, on average, one weapon is moved for every three violent deaths. General Hugo Casas, who was commander of the Police in Cali, went so far as to say that “the more we seize, the more weapons come out.”

The mayor of Cali, Jorge Iván Ospina, tells Efe that the deaths on a normal day in Cali are counted in the same proportion in which the murders of the last days of protests have been counted: 5 or 6 cases.

For the analyst of the Peace and Reconciliation Foundation, Ariel Ávila, in the city there is a strategy to allow civilians to fight among themselves and that little by little a “white-shirt mafia” is consolidating, who are the ones who — has been detected – they shoot at the protesters.

For this reason, Ávila considers that it is necessary for the alarms to go off so that human rights organizations monitor what is happening not only in Cali but throughout the country.

The terror of paramilitarism

The fear of the self-defense groups is entrenched in the hearts of Colombians, who for more than 20 years suffered almost two thousand massacres throughout the national territory that left about twelve thousand victims, according to the authorities.

The director of the security and criminal policy area of ​​the Ideas for Peace Foundation (FIP), Jerónimo Castillo, from his distance in the capital of the country, says that it is premature to talk about the consolidation of new paramilitary groups.

He attributes the event to the tension facing the country. What it does acknowledge is that in Colombia there are a high number of illegal weapons circulating and maintains that these not only serve to commit homicides, but also have a special intimidation connotation.

Meanwhile, Carlos Andrés Clavijo, political leader of the city, warns that the community of southern Cali is upset, with good reason, by the constant blockades and “the kidnapping to which we are subjected in our own homes.”

He adds that “there is a wounded population” and if “there is no State, it is necessary to protect property in some way,” although he always proposes to establish dialogue to resolve conflicts. For this reason, he calls for a plebiscite where the points raised by the protesters who started the national strike are put to a vote.

Protests in Colombia: What is the IACHR doing during its visit to the country?