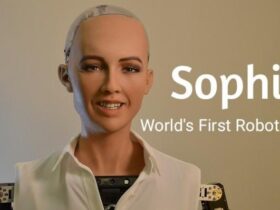 Sophia: the Humanoid Robot That Could Reach Airports, Hospitals and Cafes This Year

China plans to mass-produce this female robot model throughout 2021 to help fight the coronavirus pandemic.

Sophia the robot woman who went viral since she was presented back in 2016 by the Hanson Robotics company. The Hong Kong, China-based company set itself a new challenge: mass-produce thousands of robots by the end of this year to care for the elderly and those affected by the coronavirus or simply to accompany them.

Sophia was created to promote empathy and compassion between humans and machines. Asked about the Covid-19 pandemic , “Sophia said she is concerned . “

The main functions of this cyber celebrity are to carry on a conversation and display a variety of facial expressions. Its creators are developing more “health care” functions for it, such as taking temperatures or performing aerobic exercises.

Hanson Robotics believes its robots could also help industries by working closely with people, but without transmitting the virus.

The Hong Kong-based company Hanson Robotics has four different models of robots, which together with Sophia, assure that they will leave the factories in mid-2021, just at which time the company sees that the pandemic will leave new opportunities for the robotics market.

According to the CEO and founder of Hanson Robotics, “the world of Covid-19 will need more and more automation to keep people safe . ” Hanson thinks that robotic solutions in the pandemic are not just limited to medical care for patients or the sick, but could help in retail or other functions such as airlines. “The robots Sophia and Hanson are unique in being so human,” added the director. “That can be very helpful in these times when people feel terribly alone and socially isolated.

The company is now launching a new robot called Grace , developed specifically for healthcare. The boom in professional service robots was already underway before the pandemic, and now global sales are still on the rise.

The developer of Sofia , the humanoid robot that was unveiled in 2016 and gained widespread popularity for its radical claims about destroying humanity, aims to mass-produce several of its models by the end of this year, Reuters reports .

The American Hanson Robotics, based in Hong Kong (China), indicated that four of its robot models , including Sofia, will begin to leave the factories in the first half of this year, just as researchers predict that the pandemic will open new opportunities for the robotics industry.

The world in the framework of covid-19 “will need more and more automation to keep people safe,” predicts David Hanson, CEO of said company. Hanson believes that robotic solutions for the pandemic are not limited to healthcare, but could also be implemented in sectors such as retail and airlines. This year the company will launch the ‘Grace’ robot, developed exclusively for the healthcare sector.

Sofia and other Hanson Robotics models are “unique in being so human-like,” he noted. “That can be very useful in these times when people feel terribly alone and socially isolated,” added the businessman, who plans to sell “thousands” of robots this year.

The professor of social robotics at Hong Kong Polytechnic University, Johan Hoorn, who took part in the development of Sofia, said that although this technology is still in its early stages, the coronavirus pandemic could accelerate the arrival of robots. to the market, “because people begin to realize that there is no other option”

Sophia: the Humanoid Robot That Could Reach Airports, Hospitals and Cafes This Year