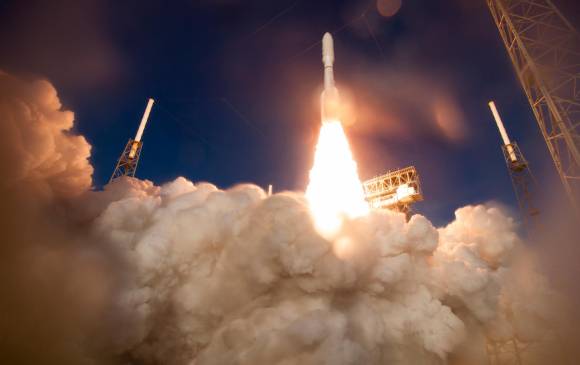 Helicopters flying over the Red Planet could glow in the dark due to a strange effect of the Martian atmosphere.

The spinning blades of drones sent to the alien world can cause tiny electrical currents to flow in the air, according to a NASA study .

This process is the same one that causes the corona on Earth, or the glow that is occasionally seen on aircraft or ships, also known as Fire of Saint Elmo.

“The faint glow may be more visible during the evening hours, when the background sky is darker,” said William Farrell of NASA’s Goddard Space Flight Center, lead author of the new research . “NASA’s experimental Ingenuity helicopter is not flying at this time, but future drones could be cleared for night flights and look for this glow.”

Farrell continued: “The electrical currents generated by the rapidly rotating blades of the drones are too small to be a threat to the spacecraft or the Martian environment, but they do offer an opportunity to do additional science to improve our understanding of an accumulation of electrical charge called ‘triboelectric charge’”.

This type of charge occurs when friction is transferred between objects, similar to static electricity.

NASA researchers found that as the drone blades spin, they interact with tiny dust grains in the Martian atmosphere, and they interact more when the helicopter is closer to the surface. As the blades hit the powder, the charge is transferred to create an electric field, building to higher levels until it reaches the point where it can conduct electricity.

This phenomenon is more likely to occur on Mars than on other planets, such as Earth, because the Martian atmosphere is only one percent that of our planet.

On Mars, the molecules that make up the atmosphere are not as dense as on Earth, which means that the free electrons that cause conduction can accelerate to high speeds before colliding with another molecule, reaching a point where they can cause a “electron avalanche”.

However, the researchers seek to emphasize that this is simply a prediction: the actual effect might not be strong enough.

“In theory, there should be some effect, but whether the electron avalanche is strong enough to create a glow, and whether any faint glow is observable during operations, remains to be determined in future drone flights to Mars.” Farrell specifies.

“In fact, one could even place small electrometers near the blade and on the legs to monitor the effects of any loading. This type of electrical monitor could have scientific value and provide key information about the status of the drone during flight.”