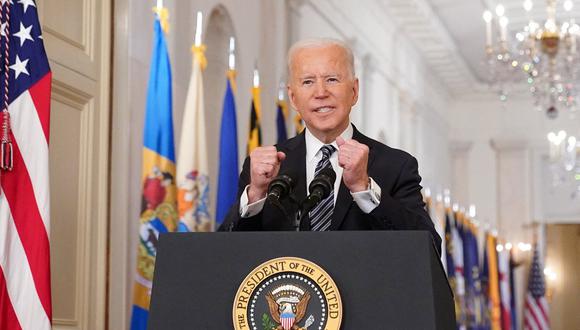 Dustin John Higgs, executed in the early hours of this Saturday morning, has become the thirteenth and last federal prisoner sentenced to death under the mandate of the president of the United States, Donald Trump, since the Department of Justice restarted this modality in July 2019.

Higgs had been convicted of kidnap and order the murders of three women in 1996, although it was declared innocent until his death. “I would like to say that I am a innocent man. I did not order the murders”Were his last statements, according to the news network CNN. The perpetrator of the shots was a companion of the prisoner, Willis Haynes, he is sentenced to life imprisonment.

The US Supreme Court refused to stop the execution, although some judges disagreed, like Sonia Sotomayor, who lamented the “unprecedented urgency” that has surrounded this case. “After waiting nearly two decades to resume federal executions, the government should have proceeded with some restraint to ensure that it did so legally”, He declared.

Higgs’s execution continued anyway despite his lawyer’s appeal, Shawn Nolan, who requested a postponement because his client suffered from coronavirus and, in general terms, it was a Unfair sentence given that the person responsible for the shooting, Haynes, was already serving a life sentence.

The United States resumed executions at the federal level in July last year on the orders of the country’s attorney general, William Barr, after a moratorium of 16 years. Before Trump took office, only three federal executions had taken place in this period.

Barr argued that federal executions are contemplated by Congress and the last ones are directed against “Those responsible for the murder, and sometimes torture and rape, of the most vulnerable in society, children and the elderly”.

Barr’s words marked the official announcement of the end of an informal moratorium on the death penalty since the 2003 execution of Louis Jones. However, capital punishment has continued to be applied in each of the 29 states in which it is contemplated.

Recently, the United States carried out the first federal execution of a woman in nearly 70 years. Is about Lisa Montgomery, 52 years old, convicted in 2007 for having strangled in 2004 a 23-year-old woman who was eight months pregnant to take her baby, which was later recovered safe and sound by the authorities.

Montgomery’s attorney, Kelley Henry, who has long argued that her client suffered brain damage from beatings she received as a child, in addition to psychosis and other mental illnesses, she had defined the decision to execute her as an “injustice”.

“In the grip of her mental illness, Lisa committed a terrible crime”Henry, a public defender from Nashville, Tennessee, said in a statement. “However, she immediately expressed deep regret and was willing to plead guilty in exchange for a life sentence without the possibility of release “he added.

“Lisa Montgomery has long accepted full responsibility for her crime and will never get out of jail. But her severe mental illness and the devastating effects of her childhood trauma make executing her a profound injustice, “he said.

The kidnapped baby, Victoria Jo, who is now 16 years old, she was raised by her father.

A spokesman for President-elect Joe Biden told the news agency AP that democrat “Opposes the death penalty now and in the future” and what will he try terminate your application. However, his representatives did not say if there would be a pause in executions immediately when he takes office.

(With information from Europa Press, EFE and AFP)

A pardon and an ironic rebuke: the last words of the Virginia serial killer before being executed