Assault on the Capitol: Attacker Guy Reffitt sentenced to seven years in prison

The splendor of Miami Beach with its white sand and luxury hotels, it makes it hard to imagine that it was once an inhospitable marshland.

What was just a mangrove island at the beginning of the 20th century, today is a symbol of luxury and debauchery.

In the last days, however, Miami Beach made the news again, because in the town of Surfside, located on the same island, part of the residential building called Champlain Towers collapsed at 8777 Collins Avenue.

Until this Monday night, the collapse has left 11 dead and 150 missing.

It is not yet known what caused the collapse of the building, but many questions have been raised about the land in which several buildings in the area are built.

Experts agree that it is too early to draw conclusions about the collapse, but they also warn that this catastrophe serves as a warning to remember the vulnerabilities facing one of the most desirable tourist and residential areas on the planet.

Miami Beach is a city of 90,000 inhabitants, which is part of Miami-Dade County, in the southern state of Florida, USA.

It is an island that has the Atlantic Ocean to the east and Biscayne Bay to the west, which separates it from the city of Miami. 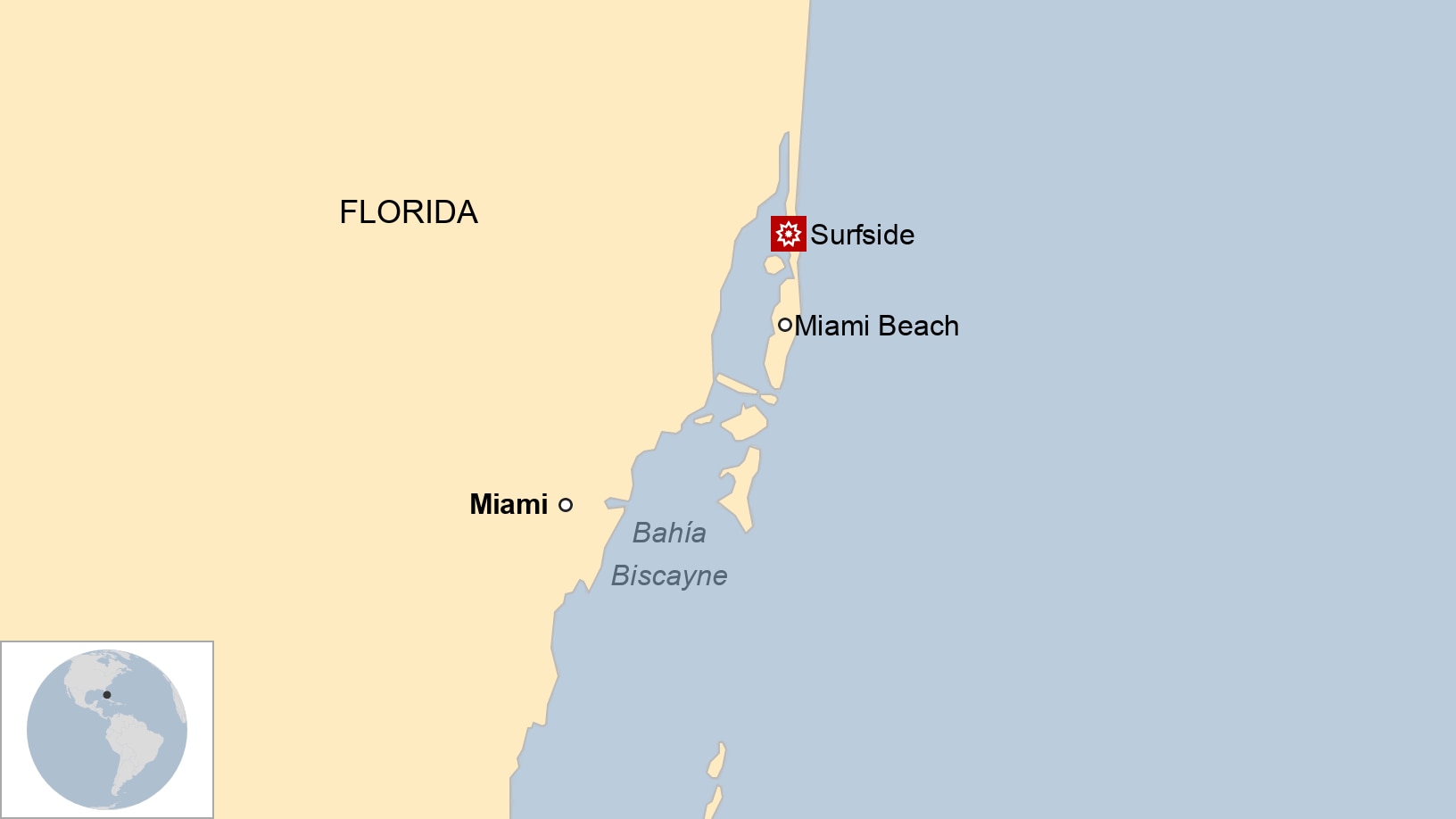 Miami Beach is built on what is known as a barrier island, a natural portion of land that is located parallel to the coastline.

These types of islands are formed when waves repeatedly deposit sediment in an area near the coast.

Barrier islands are fragile soils, made of sandy and erodible soils, subject to the impact of ocean waves.

As the wind and waves change according to weather patterns and local geographic features, these islands are move, erode, and grow and shrink constantly, as explained by the US National Office of Oceanic and Atmospheric Administration (NOAA, for its acronym in English).

Although it is not known with certainty, it is estimated that the barrier islands were formed around 18,000 years ago, towards the end of the last Ice Age.

Today, barrier islands play an important role for both humans as for all nature.

On the one hand, they protect coasts from the severe impact of storms, and also serve as home to a variety of Flora and fauna.

Until 1912, what is now Miami Beach was a barrier island dominated by mangroves.

At that time, several entrepreneurs and investors such as John S. Collins, Carl Fisher, and John and James Lummus saw in the island the potential to build a city dedicated to the pleasure and luxury seaside.

With the urban Development and a bridge that connected it with Miami, Miami Beach, officially founded in 1915, began to receive visitors from all over the country, and today it is a tourist destination worldwide.

By dredging, the builders were adding more ground to the island, which today has a land area of ​​19 km².

The eastern part of the city, which is higher, is built mostly on limestone, organic fillers and sand.

The western part is mostly raised on wetlands that were filled in, with which the mangrove was razed.

“They created ground from something that was inhabitable or that it wasn’t even there, and they built on top of it,” geologist Randall Parkinson, a coastal areas researcher at Florida International University (FIU), tells BBC.

Parkinson, however, warns that the terrain of Miami Beach, can to vary quite throughout the island.

The western area of ​​the city does not sit on very strong rocks, so there are more and more subsidence and flooding in that part of the island, as explained in a recent interview to BBC by geologist Shimon Wdowinski, an expert in space geodesy, natural hazards and sea level rise at the FIU.

For its part, in the eastern area of ​​Surfside, where the collapsed building was, there is a very porous limestone and with a low elevation, says Wdowinski.

In any case, Parkinson insists that the terrain can vary greatly.

“What is under a building may not be under another,” he says.

“That said, two buildings next to each other are more likely to have similar soil and sediment underneath them than two buildings a kilometer apart.”

The construction of buildings and roads on a barrier island can affect its natural dynamics, explains Anna Linhoss, professor of biological engineering at Mississippi State University, in an article published in The Conversation.

He mentions, for example, that the construction of piers and piers can interrupt the sand flow on the island, thereby blocking the flow of sediments in some areas, which are exposed to erosion.

The soil, geographic location, climate change and urbanization of Miami Beach are already facing the island to great challenges.

Parkinson mentions that among the reasons that have been discussed to explain the fall of the building are the rise of the sea ​​level, saline intrusion and subsidence.

Saline intrusion refers to seawater that is introduced under the built land, which can generate, for example, floods in the lower part of built areas.

The subsidence, meanwhile, refers to a land subsidence.

In 2020, Wdowinski published a study that detected a subsidence of up to 2 millimeters (mm) per year in the area where the Champlain Towers South is located.

However, the expert clarifies that this alone does not explain the collapse.

But Parkinson’s point is that while they may not be the exact causes, climate change does drive sea level rise and saline intrusion; and urban development can generate subsidence.

The island can also be severely affected by the level increase from the sea because it could generate more high-category hurricanes.

“Miami Beach faces the same challenges as any other barrier island in the world,” Harold Wanless, professor in the FIU Department of Geography and Sustainable Development, tells BBC Mundo.

“There is a good chance that in the next 20 or 30 years we will have a sea level rise of between 60 cm and 90 cm due to the thaw acceleration from the poles”.

That, according to Wanless, would mean that in South Florida the inhabitants would lose access to fresh water, treatment plants would stop working and large areas would remain constantly flooded.

“Living there will end throughout this century,” says the expert.

“This is an extreme concern.”

Parkinson agrees, adding that this will be a problem “Getting worse, worse and worse”.

Millions of dollars have been invested in Miami Beach to meet these challenges.

Experts, however, warn that the challenge is enormous.

“We pretend it will be just a little and that we can stop it, but we can’t stop it because we warm the ocean,” says Walness.

“What happened at Champlain Towers may not have to do with sea level rise, but it shows the need to start talking about it, because it is something that we face.” Notes Walness.

“For a long time we have acted as if there was no problem, with the attitude of building without worrying.”

“We must not only look at how we will build in the future, but also at the older buildings that will be affected by the rise in sea level.”

And on the future of Miami Beach, Walness has a blunt conclusion: “The best thing is that they come and enjoy it while it still exists”.