The Nikkei closes at its lowest level in all of 2021 The Commerce Department pointed out that due to inflation, practically all categories, except groceries and others, had a drop in sales in December

Not even Christmas was enough to increase retail sales in December in the United States. By contrast, sales fell 1.1% as inflation remained high, despite a low year-end, the Commerce Department reported on Wednesday.
According to the agency, it is the biggest monthly drop since December 2021. Almost all categories (except building materials, groceries and sporting goods) had a drop in sales compared to the previous month.

Despite the fact that many retailers, including the giants Amazon and Walmart, began their discount seasons from October, bringing different offers in November and December to motivate consumption in the last months of the year, 2022 had a low-key end. In fact, October was the last strong month for retail sales, as there was a combination of discounts and slowing inflation.
The Commerce Department’s retail sales data is not adjusted for inflation, which hit a 40-year high in June before falling during the second half of 2022, hitting 6.5% in the 12-month period ending in December. according to the most recent Consumer Price Index released last week.

Wholesale price growth is also cooling significantly: December’s producer price index was 6.2%, according to Bureau of Labor Statistics data released Wednesday.
The challenge of surpassing the sales of a year ago was very great, since during the Christmas season of November and December of 2021, retail sales grew 5.3% to $936.3 billion, the National Retail Federation reported Wednesday.

“We knew that final holiday sales could be touch and go given the early buying in October that likely fueled some sales plus price pressures and cold, stormy weather,” Jack Kleinhenz, NRF chief economist, said in a statement. “The pace of spending was uneven and consumers may have withdrawn more than we expected, but these numbers show that they navigated a challenging inflation-driven environment reasonably well. The bottom line is that consumers remain engaged and buying despite everything going on around them.”

Although consumer spending has held steady despite inflation, rising interest rates and recession fears, some economic data shows activity slowing.
That is seen in the declines in monthly sales in categories such as motor vehicles, which are down 1.2% since November; furniture, 2.5% less; and electronics, 1.1% less, according to Wednesday’s report.

But it’s not all bad news, on the contrary, spending on food services and places to drink increased by 12.1% in December compared to the previous year. 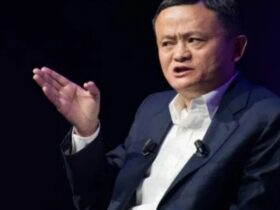 Why are Alibaba shares in Hong Kong soaring today?