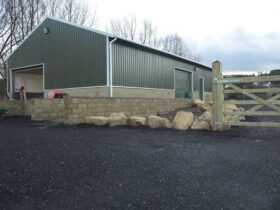 Agricultural Steel Buildings: What They Are and What They Offer

Scratch cards do not give players an opportunity to influence luck other than by choosing the ticket and a particular ticket. But the scratch cards don’t reveal where a prize is hidden by their appearance alone – or do they?

Mohan Srivastava invented the so-called singleton method and claims that the printing on the tickets can tell the odds of winning.

How does the singleton method work, how can players use it to win scratch cards, and why haven’t the manufacturers of the playing cards reacted in the 20 years or so since the procedure became known? We introduce Mohan Srivastava and take a closer look at his singleton method.

What is the singleton method for scratch cards?

Scratch tickets, or scratch cards , are a quick, easy, and often spontaneous game of chance. At the kiosk or at the gas station, you can quickly take another lottery ticket with you and, with a bit of luck, be happy about a win, possibly even a jackpot.

The principle is simple: players remove a coating from the playing fields and the underlying numbers or symbols reveal whether the ticket is a win or a failure. However, no one can know what is hidden under the fields, after all the winning lots with their numbers are randomly distributed.

This is where the singleton method comes in: at random. “Singleton” in English means something like a single piece or number. There are lots with a game principle that has open and hidden playing fields.

The players first reveal the hidden winning numbers. Then you have to “find” these winning numbers on the open playing field. Depending on the position and frequency, the profit can then be high or low.

Mohan Srivastava observed that single numbers among open numbers led to wins more often. He called a singleton or single number a number that appeared exactly once on the open playing field of a scratch card. If several of these “singletons” meet in a winning combination, there is a high probability that the ticket will be a winner.

According to his calculations, Mohan Srivastava was able to increase the chances of winning to between 60 and 90 percent using the singleton method, depending on the game principle of the scratch card. However, he himself never exploited this obvious error in the design of the scratch card on a large scale. Instead, he reported his find to the lottery regulator.

How the Singleton Method works in detail: the story of Mohan Srivastava

Mohan Srivastava is a geological statistician by trade, so he knows numbers. He made his discovery in 2003 and only dabbled in scratch cards because he received some cards as gifts.

Toronto resident Srivastava made a profit of three Canadian dollars. The smallest possible winning amount was enough to arouse his curiosity. His winning ticket was based on a tic-tac-toe game principle. There were winning numbers to reveal on the left half of the scratch card.

On the right half, eight tic-tac-toe playing fields were printed, each with three times three fields, in each of which a number was printed openly. If three of the winning numbers appeared in a row in a playing field, it was a win.

Mohan Srivastava had his winnings paid out on a walk and dealt more closely with the Tic-Tac-Toe scratch cards. At that time he did not want to crack the system, he was only interested in how the manufacturer solved the problem of chance.

The openly printed numbers could not be randomly distributed, but had to give the appearance. Srivastava soon had an idea of ​​the algorithm needed to do this, but it was only later, when he passed the point of sale again, that he developed the ambition to crack the game.

A few scratch cards and a few hours of brainwork were enough to find the flaw in the tic-tac-toe design of the scratch cards. The board with the open numbers consisted of eight fields with nine numbers each, so a total of 72 fields, each of which was provided with a number between 1 and 39.

Some of these numbers appeared more frequently, others less frequently, and some only once.

The numbers themselves are meaningless, their frequency determined fate. Srivastava found out that “singletons”, i.e. single numbers that only appeared once on the eight playing fields, were among the hidden winning numbers with a very high probability.

Three single numbers in a row of a tic-tac-toe field means a winning ticket in 90 percent of all cases.

Further test purchases confirmed the success of the singleton method. But Srivastava did a quick mental calculation and found that analyzing a lot took about a minute and he had to scour all the outlets for winning lots.

By his calculation, he could expect to earn around $600 Canadian a day. In his estimation, his time was too valuable for that and his job as a statistician far more bearable.

He bought another 20 Tic-Tac-Toe scratch cards and sorted them into winners and losers without scratching the fields. He sent both batches to Rob Zufelt, asking him to test the lots. Shortly after receipt, the security officer reported: Srivastava had successfully predicted 19 out of 20 scratch cards.

Why Scratch Card Manufacturers Are Not Responding

In its official statement, the Ontario Lottery and Gaming Corporation announced that the tic-tac-toe gameplay had a “design flaw” and blamed the company that made the tickets. The printer then assured that all other scratch cards with a similar game principle were “safe”.

But why are there scratch cards with openly printed numbers that can be analyzed theoretically? A simpler game principle would not give ticket buyers the opportunity to draw conclusions about the hidden playing fields.

The reason lies in the gambling offer as a whole. Scratchcards compete with other lotteries, which in turn compete with arcades, casinos and last but not least online gambling for the stakes of players.

Scratch cards offer entertaining fun that ends immediately after the fields have been uncovered. Therefore, the manufacturers rely on forms of play in which the players have to match numbers or fields with each other and thus deal with a single lot for longer.

This increases the tension, not least because the manufacturers incorporate many near-wins, for example when there are only two winning numbers in a row instead of three.

Although the manufacturer discontinued the Tic-Tac-Toe tickets, the scratch card adventure did not end for Mohan Srivastava. From a purely statistical point of view, the gameplay could not be the only one that was susceptible to such a prediction of the winning numbers.

He dealt with other Tic-Tac-Toe lots in Canada and the USA. He soon found a game in Colorado State that gave him a 70 percent chance of winning. He also had success with bingo scratch cards.

Even ten years after its original discovery, Srivastava was able to use the Singleton Method to predict a bingo scratch card as a winner 60 percent of the time.

The safety of the lots is an important point. The companies are careful that barcodes and serial numbers, for example, do not identify winners and that the coating can withstand tampering and cannot be optically “x-rayed”.

The lotteries have tickets and game principles checked by independent security companies. However, Srivastava claims that any design, no matter how secure, can be cracked as long as it is not absolutely random. If there is an algorithm for production, it can be replicated or broken down.

Can Anyone Win at Scratch Cards Using the Singleton Method?
In principle, every player can analyze scratch cards and find and exploit weak points or errors. This type of procedure to increase the odds of winning is not, in itself, illegal.

It is not fraud as long as there is no tampering with the lot or plating, and no collusive collusion or deals are made with outlets.

The singleton method with the individual numbers only works for lots with a corresponding game principle in which scratched off fields have to be matched with previously open numbers or symbols. In practice, however, there are a few hurdles in the way of winning the jackpot with the singleton method:

However, according to Srivastava, the statistics also indicate that such lotteries are being exploited in practice. Many scratch cards have winnings equal to the price of the ticket. The player gets exactly his stake back or can buy another ticket with such a win.

Srivastava studied the payouts of lotteries that published them and found that in some cases these so-called “break-even” tickets were redeemed far less frequently than tickets with higher prizes. However, since there are far more of these lots, this is a statistical anomaly.

The explanation given by the lottery organizers themselves is that many players forget to cash in their break-even winnings. Srivastava, on the other hand, says that anyone who analyzes scratch cards for winning tickets would of course avoid these break-even tickets.

In his opinion, the actual payout statistics of the scratch cards are congruent with those that would result from such an intervention in the game.

Even if his suspicion remains theoretical, there are cases in North America that make you suspicious. In the US state of Massachusetts, a single person redeemed a total of 1,588 tickets totaling $2.84 million between 2002 and 2004.

With only about six tickets sold in 100,000 paying out between $1,000 and $5,000, statistically these players would have had to buy hundreds of thousands if not millions of tickets.

The discovery of Srivastava did not receive wide publicity, and even among lottery operators, the singleton method is not well known. Mohan Srivastava himself rules out that he is the only one who has learned to take advantage of scratch cards.

In his opinion, organized crime offers an opportunity to launder money on a large scale. With a probability of winning of 60 percent and upwards, laundering money by lottery is worthwhile. Reason for the FBI and its organized crime unit to investigate lottery winners.

For example, in 1991, Boston mob boss James “Whitey” Bulger was involved in a $14.3 million raffle ticket prior to his arrest. Predictable scratch cards are more lucrative for criminals than truly random lotteries. But even the FBI has not uncovered any cases in which a lottery was in the hands of criminals.

However, there are still indications that individual scratch cards and lotteries play to their advantage. Joan Ginther from the US state of Texas, for example, pocketed more than one million US dollars with four entries.

Three of them were scratch cards, two of which she bought from the same shop in Bishop, Texas. She then even managed to win a whopping $10 million with a $50 scratch card.

This is the largest payout in Texas lottery history. Joan Ginther has declined most media contacts. It is unknown if she successfully used the singleton method or gained an advantage in some other way. Statistically, at least, their luck is highly unlikely.