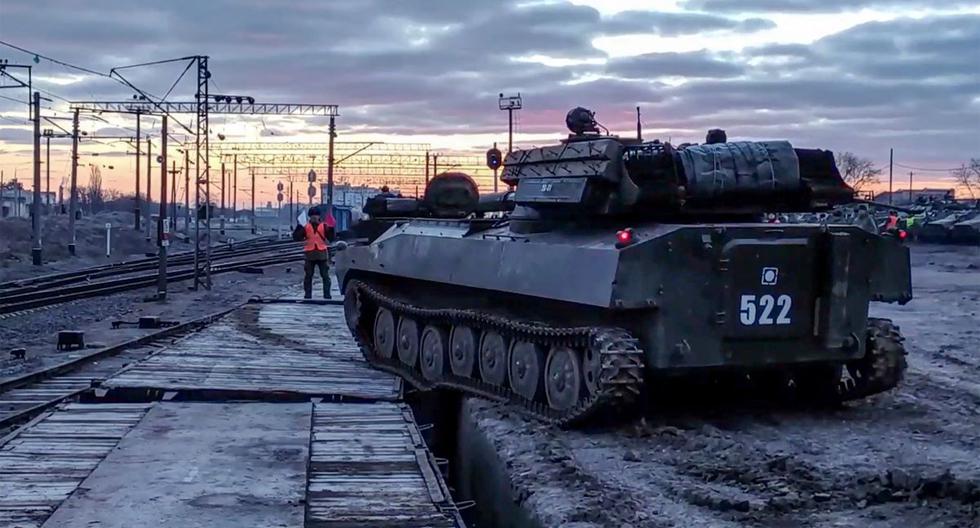 Boris Johnson on the withdrawal of Russian troops from the border with Ukraine: “The information we see is not encouraging”

Maersk will have one of its main global green methanol production centers in Spain, its biggest commitment to decarbonize its fleet. The Danish giant, one of the largest sea freight transport companies on the planet, will invest 10,000 million euros in Andalusia and Galicia for the development of two of the “five or six” production centers for this carbon-neutral fuel for feed their huge energy needs.

Both methanol manufacturing centers, which have an essential ingredient in green hydrogen, will be Maersk’s second and third on a global scale, after Egypt, announced in March. The project, agreed from start to finish with the Spanish Government, will have European funds —not yet quantified— and the Executive does not rule out even participating as an investor, which would be a novelty. Government sources calculate between 4,500 and 5,000 direct jobs that will be created in both locations, to which another 40,000 indirect jobs must be added and around 35,000 or 40,000 only in the construction phase.

The Executive and Maersk signed a memorandum of collaboration that contains the basic lines of the project after a meeting between Pedro Sánchez and the chief executive of the Nordic company, Soren Skou, which was also attended by the Minister of Transport, Mobility and Urban Agenda, Raquel Sánchez, and the Secretary General for Economic Affairs and G20 of the Presidency of the Government, Manuel de la Rocha.

“It is a strategic, country project: in the future, maritime routes will be reconfigured around large hubs that will supply ships with green fuel, and only the countries that are committed to its production will be well positioned. For Spain it is very important to be in the first division of maritime fuel”, explain these sources, who call June to make public more details about the project, in which both the Junta de Andalucía and the Xunta de Galicia are also involved.

To produce methanol that bears the green surname (and comes close to carbon neutrality), two ingredients are needed: green hydrogen—a highly electricity-intensive gas from wind or solar sources—and biogenic CO₂—in many cases, captured in plants of biomass—. And on both fronts, Spain has all the signs to become a continental and even global power. The coalition Executive relies on a recent study by the investment bank Goldman Sachs to affirm that Spain is the most competitive country in Europe for the production of green hydrogen, a gas that is not yet profitable, but on which a good part of the expectations rest decarbonisation of sectors —heavy industry— or areas —aviation, maritime transport— in which electrification is not possible in the short term.

The energy needed in the electrolysis process —with which green hydrogen is generated— will be generated in wind or photovoltaic parks promoted by Maersk, either through direct ownership or with long-term supply contracts (PPA, in the industry jargon). “They want to carry out the entire process, control the entire methanol production chain,” they point out from the Executive, who calculate that the shipping company will require “between 20 and 80 new wind or photovoltaic parks. In 2030, when the two methanol production plants are operating at 100% of their production capacity —at least, on paper—, the Danish firm will need four gigawatts of installed power for the process. To do this, it will buy facilities that are already in operation or in the process of being processed and will build new ones, preferably near the two production centers.

“They have been guaranteeing land for months to develop these facilities. They have thrown the numbers and they come out ”, slip the aforementioned sources. It will also sign PPAs with energy companies that operate outside Andalusia and Galicia. The objective of Maersk —with more than 100,000 employees on the workforce, a fleet of 730 freighters and a market share of close to 20%— and of the Spanish Executive is that, of the 12 million tons of green methanol produced internally that it will need for its fleet at the end of the decade, two leave its Spanish plants.

The development of both will consist of three phases: in 2025 only one of them —it is still unknown whether the Andalusian or the Galician one— will generate around 200,000 tons; in 2027, the sum of both —by then the second should have already entered into activity, according to preliminary information— will be around one million tons, and in 2030 there will be two million tons in total.

Maersk and the Government are aware of the technological uncertainty and that green methanol is only one of the two options with the best chance of coming together for the decarbonization of the barges that transport containers throughout the world – the other is ammonia , which also originates from green hydrogen—. For this reason, both have left the door open for their infrastructures in Spain to be redirected to this second alternative, depending on how the market evolves. “Methanol seems to be the one that is going to succeed. However, between the first and the second phase, the decision will be made on whether the second plant is for one or another fuel”, they underline from the Executive. The naval sector is one of the most polluting economic sectors and changing this dynamic is, therefore, essential if the decarbonisation goals are to be met. Maersk’s commitment is to be a company with net zero emissions by 2040, an objective that implies scrapping or retrofitting its entire fleet (more than 700 ships), currently with engines powered by fossil fuels. In this bet, Spain will have a central role.