Two women were killed today in the Israeli city of Ashkelon by rockets fired from Gaza, what the first fatalities in Israel since the start of the escalation of violence on Monday with the Palestinian fringe, from which the militias have fired 250 rounds in less than 24 hours.

The victims were in “an old building” no bomb shelter, and paramedics found them “trapped in the rubble” of the building, where the rockets hit, said a spokesman for the United Hatzalah emergency service.

The Qassem Brigades, the armed wing of Hamas, had promised to turn the city “into hell” and launched an intense volley, claiming to have fired 137 rockets towards Ashkelon and nearby Ashdod in just five minutes. 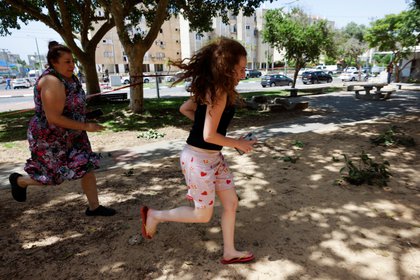 A woman and a teenager run as a siren sounds warning of an incoming rocket launched from the Gaza Strip, in Ashkelon.

The local Barzilai medical center said it was treating 70 injured people of the shots. 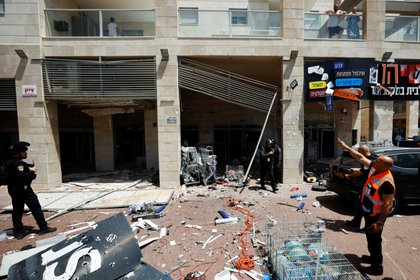 Israeli police work where a rocket launched from the Gaza Strip hit a shopping complex in Ashkelon.

Loud explosions shook the city again on Tuesday, where the rockets hit directly on various buildings. The attack on an apartment building left earlier 19 people injured.

Four of them are members of the same family: the father, 40, is in moderate to severe condition after a blow to the head; the 39-year-old mother is in moderate condition; and the two boys, ages 6 and 12, were slightly injured. 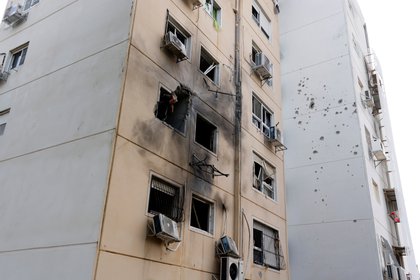 The woman told Israeli media that she and her husband were “lying in the hallways and the children on the mattresses” when the sirens sounded.

“There were many explosions and the plaster ceiling collapsed, and then I saw that the children were injured. My husband yelled to ‘help me’ and I couldn’t reach him because the roof had collapsed.” When she got to him, she saw him “Covered in blood.” 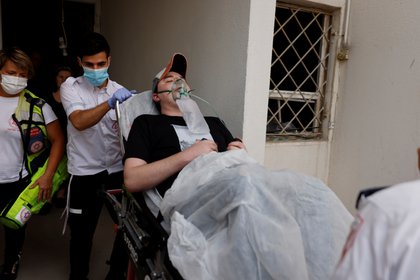 Doctors treat a man wounded in the Palestinian attack in Ashkelo.

The Barzilai Medical Center in Ashkelon reported that one person was admitted in serious condition, another in moderate condition, and another 17 patients suffered minor injuries. 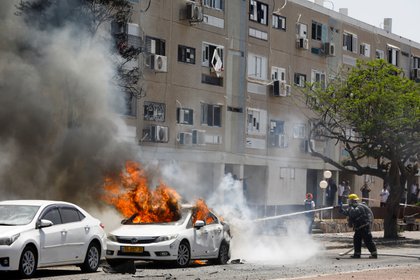 Israeli firefighters put out the fire in a car hit by a Palestinian rocket in Ashkelon.

A 63-year-old man and an 82-year-old woman were also among the minor injuries. 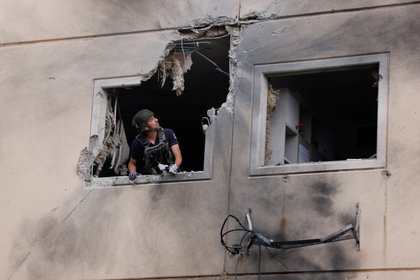 The clashes started by the tensions registered in Jerusalem continued at dawn and spread with protests to West bank and Arab communities in Israel.

Several properties in Israel have been damaged by rockets, including a house in Beit Nekofa, west of downtown Jerusalem.

The damaged residential building in Ashkelon. 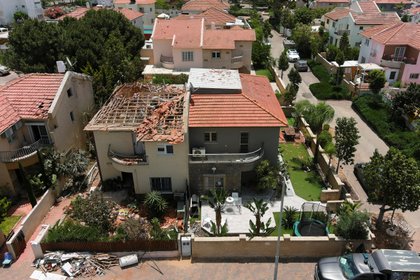 Another damaged building in Ashkelon.

The massive rocket fire from the Palestinian enclave also made sounding anti-aircraft alarms in Jerusalem for the first time since 2014.

However, 90% of the rockets fired from Gaza were intercepted by the Israeli defense system, Iron Dome, reported a military spokesman. 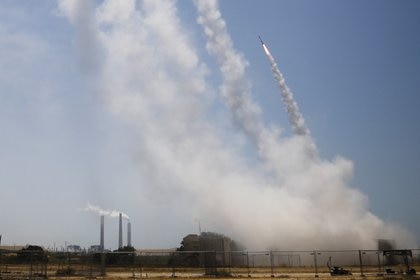 The Iron Dome system intercepts the rockets launched from Gaza.

Following the aggression, Israel responded by launching the “Guardians of the Wall” operation last night. Israeli shelling against armed militia targets in the enclave raised at least 24 Palestinian dead in the strip. According to the Hamas-controlled government, they include nine minors.

The The Israeli army “neither confirmed nor denied” that the deaths of civilians were the result of the bombings, but it claimed that the targeted attacks against Hamas and Islamic Jihad militiamen left 15 dead and that a third of the militias’ shots missed and fell on the same strip, “causing casualties”. The second of these groups confirmed the death of two of their leaders during the operations.

These launches, considered for Israel “a red line”, have triggered the tension and violence between Palestinians and Israelis that during the early morning spread to many parts of the region with riots and protests.