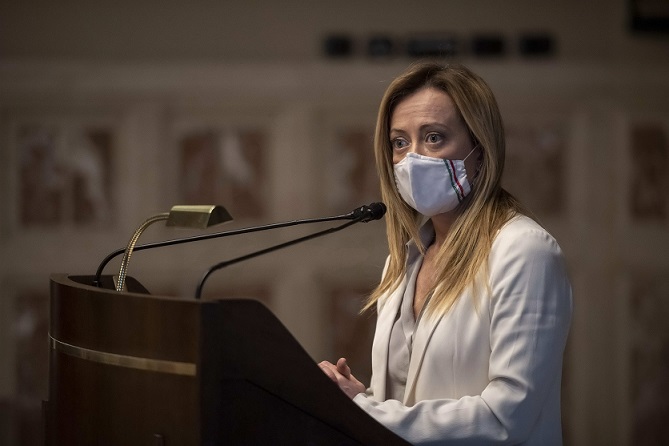 Government, Meloni “In the direction of FDI I will propose a vote against”

Berlin, March 22 – German restaurants and hotels billed between March 2020 and January 2021, that is, from the month of the first partial stoppage of public life due to the coronavirus pandemic, 47.1% less than in the same period a year ago, according to provisional data published today by the Federal Statistical Office (Destatis).
Since then, in no month has the turnover in this sector reached the same level as a year earlier and the drop was particularly high in the months of April and December 2020 -in full partial stoppage of public life- with 74, 7% and 71.1% less, respectively.
In these months, locals could only offer take away food and hotels could accommodate at most customers on business trips.
However, the easing of restrictions during the summer months did not bring about a total recovery for the sector, which in August – traditionally the month with the highest volume of turnover – entered 20.5% less than a year ago.
At the same time, the decrease in billing did not affect the sector to the same extent and was greater, and particularly high, in accommodation -54.8% – than in restaurants -42.7% -.
HOTELS AND BEVERAGE SALES PREMISES, PARTICULARLY AFFECTED
The absence of foreign tourists and the cancellation of large events and fairs particularly affected hotels, hostels and pensions, where turnover decreased between March 2020 and January 2021 by 57% compared to the same period of the previous year, while tourist accommodation they registered a somewhat smaller decline, of 41.8%.
Meanwhile, the campsites benefited from the easing of restrictions and the increase in inland tourism, and between July and October last invoiced even more than a year earlier, so that the turnover between March 2020 and January 2021 only contracted 9.7%.
The most affected businesses within the restaurant industry were those whose highest income came from the sale of beverages and which, between March 2020 and January 2021, billed 62.2% less.
Restaurants, bars and fast food outlets were able to compensate for part of the decrease in customers with home delivery and take away services, with which turnover in the same period fell by 41.3%.
The lower turnover also resulted in a 19.2% drop in the number of employees in the sector, between March 2020 and January 2021.
The cuts in personnel in hotels, hostels and pensions, where the decrease in billing was greater, were, with 17.8%, somewhat lower than in the places that sell beverages, where they reached 38.9%.
Before the pandemic, in 2018, the sector’s turnover had totaled 98.3 billion euros, of which 65.1 billion went to restaurants and 33.2 billion to hotels.