Al Horford’s wait is over, NBA Finals time looms with the Celtics

The Los Angeles Rams won their second NFL championship in history on Sunday by beating the Cincinnati Bengals 23-20 in Super Bowl LVI.

Los Angeles quarterback Matthew Stafford led his team to victory with a touchdown pass to Cooper Kupp with just a minute and a half to go. Stafford racked up three touchdown passes in the game.

With this victory Sean McVay, just turned 36, is now the youngest coach to win the Vince Lombardi Trophy. That honor belonged to Mike Tomlin, who did it with the Steelers in Super Bowl XLIII when he was 36 years, 11 months old.

The Rams have played five times for the NFL championship; they won Super Bowl XXXIV over the Titans and now the LVI. They lost the XIV edition against the Steelers, and the XXXVI and LIII against the Patriots.

The Rams were crowned at their home, SoFi Stadium, located in Inglewood, California, making them the second team in the NFL to lift the Lombardi Trophy at home. The first to do so were the Tampa Bay Buccaneers at their home, Raymond James Stadium, where they beat the Kansas City Chiefs in Super Bowl LV last year. 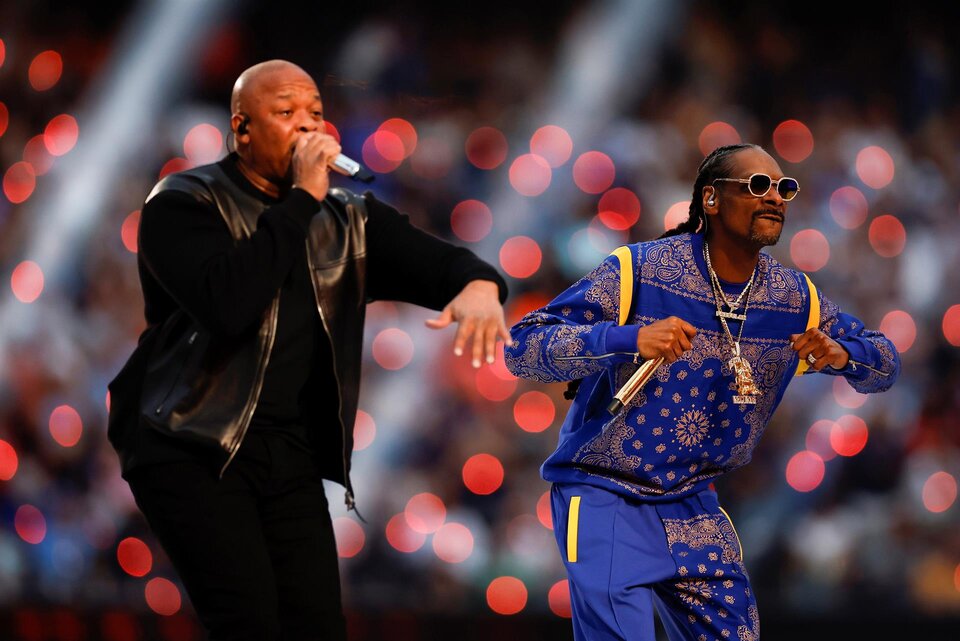 The pride of rap at the heart of the Super Bowl. That was the bet of Dr. Dre and Snoop Dogg for their show of the NFL finals, in which they had as guests hip-hop stars like Kendrick Lamar, Mary J. Blige, Eminem and the surprise appearance of 50 Cent .

Rap had made occasional appearances in the Super Bowl with greater or lesser prominence.

From Compton to Heaven

With the land of his native Compton (an emblematic city for rap in Los Angeles County) on the map, Dr. Dre kicked off the concert with the classic “The Next Episode” with Snoop Dogg.

More sober and less spectacular than on other occasions, the setting for this Super Bowl recreated a street with different shops and venues, each with an individual scene as if it were a comic strip.

Together they also tackled “California Love,” Tupac Shakur’s anthem, before the big surprise of the night: 50 Cent, appeared upside down and out of nowhere.

With a staging centered on reds and blacks and a greater prominence of the choreography, 50 Cent sang “In da Club” before handing over the baton to Mary J. Blige.

The artist, who was the only female presence in the show, changed the aesthetics of the concert with a silver-colored costume and shiny finishes to sing “Family Affair” and “No More Drama”.

Although from different generations, Kendrick Lamar is also a very proud son of Compton as Dr. Dre.

Wearing clothing that read “Dre Day,” Kendrick Lamar delivered perhaps the most thoughtful and impressive segment of the show with a rendition of “Alright” fueled by fabulous military-style choreography and striking from a top-down camera.

With an explosion that destroyed part of the stage, Eminem landed, who tackled “Lose Yourself” already with the party facing its final stretch.

Eminem’s knee on the ground

Eminem finished his part by kneeling on the ground as Colin Kaepernick did in his anti-racist claims in the NFL, a gesture of homage that received much applause on social networks.

And for the denouement Dr. Dre and Snoop Dogg returned, closing the show with “Still DRE”.