President Joe Biden called it a "historic" day. This Tuesday, July 12, NASA will publish all the photographs taken by the James Webb telescope. 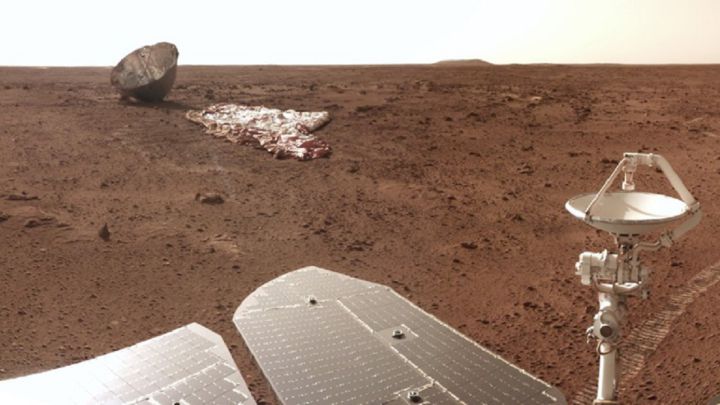 This July 11, the United States National Aeronautics and Space Administration, better known as Nasa, together with the president of that country, Joe Biden, published the “deepest and sharpest infrared image of the distant universe to date” , which is part of the compilation of photographs taken by the James Webb telescope, which will be revealed through a televised transmission this Tuesday, July 12. NASA has been publishing some of the photographs that belong to the great sample that will be exhibited this July 12, as a preview of the quality, sharpness and color offered by the aforementioned telescope, this being the most powerful placed in orbit, according to They have records.

“Known as the first deep Webb field, this image of the galaxy cluster SMACS 0723 is full of details” , explained the US agency about the image revealed in conjunction with President Biden, stating that despite the fact that the naked eye does not show show, it would be a piece with a lot to tell. And added: “Thousands of galaxies, including the faintest objects ever observed in the infrared, have appeared in Webb’s view for the first time. This portion of the vast universe covers a piece of sky about the size of a grain of sand held at arm’s length by someone on the ground , ”said Nasa, referring to the importance of photography, and trying to explain what represented.

This first observation, which is among the five announced last week, corresponds to the “deep field”, an image taken with a very long exposure time, to detect the faintest objects in the distance. Webb achieved this shot by pointing his main imager at SMACS 0723, a conglomeration of massive foreground galaxy clusters that magnify and distort light from objects behind them, allowing deep-field views of both populations of extremely distant galaxies as well as intrinsically faint ones.

NASA administrator Bill Nelson last month dubbed Webb’s now-released observation the “deepest image of our Universe ever taken” in the infrared. It reaches 13,000 million light years away, according to him he commented in the presentation before Biden. The image littered with points of light of various sizes shows the first galaxies formed shortly after the Big Bang and features dimly lit objects that have never been observed before. It is a “historic” day, President Joe Biden celebrated during the presentation at the White House.

NASA will release the rest of the first wave of images from the Webb Telescope on Tuesday in a televised broadcast beginning at 10:30 am from NASA’s Goddard Space Flight Center in Greenbelt, Maryland. They correspond to the Carina nebula, the spectrum of the planet WASP-96b, the South Ring nebula and the compact group of galaxies called Stephan’s Quintet.

The Webb Space Telescope is an international mission led by NASA, ESA and the Canadian Space Agency. Launched on Christmas Day 2021 and finally placed 1.5 million kilometers from Earth, its 6.5-meter diameter main mirror promises much more precise observations than those of its predecessor, the Hubble telescope.