Lolita Flores makes a radical decision after her controversy about feminism

When the presence of Matías Urrea, ex partner of Ainhoa ​​Arteta, on Saturday Deluxe, the military man has fallen from the list, due to a ministerial imperative.

Terelu Campos has announced that the sailor “has not received authorization from the Ministry to go to the set”. According to the Viva la vida collaborator, Matías Urrea is doing the impossible to be able to sit in the Deluxe next weekend.

Thus, for the moment, the scandal that has turned the placid existence of Ainhoa ​​Arteta upside down and that has captivated the audience by the unusual profile of the characters that star it.

On the one hand, the handsome sailor and lieutenant commander, Matías Urrea Corvalán, who left his post as strategic communication advisor at the Supreme Headquarters of the Allied Forces in Europe, in NATO, and who is currently working at the National Institute of Aerospace Technology (INTA).

And on the other, Ainhoa ​​Arteta, a diva who has conquered the most prestigious lyrical stages on the planet and is currently considered the best Spanish soprano.

Ainhoa ​​Arteta is aware of everything that is said about her on television but remains silent. She just picks up the phone to her essentials: a chosen bunch of friends, as well as her lawyer and her doctors.

The reason why her impressive voice is not heard has a compelling reason: recover her vocal cords that have been affected by her fragile state of health.

“Ainhoa ​​Arteta; keep silence to protect their way of life ”could be the title of the docudrama in which the current lady of Spanish lyric has been immersed. A woman who, despite having been married four times and being the best opera singer in Spain, had gone quite unnoticed by the bluish press.

Except for posing exclusively for Hola on the occasion of their weddings and participating in ‘MasterChef Celebrity’ and ‘Mask Singer’, the artist has always given cante on stage and has avoided doing it on television sets.

But Covid, which has turned her life into hell, is behind the looming media tsunami that threatens to change her image forever.

The unexpected and tragic consequences of the Covid in Ainhoa ​​Arteta

The Basque soprano was infected earlier this year with Covid and, since then, has suffered the serious consequences of the disease.

“At first I thought it was going to be milder and that I was asymptomatic, but the symptoms were getting worse,” said the soprano to Vanitatis last April. The infection went down little by little to the bronchi and lungs, endangering her voice and lungs, her livelihood.

When she believed that she had overcome the disease without suffering sequelae, the health problems began. In April it was revealed that she suffered from edema in the tibiae that forced her to rest and this lack of mobility caused her to travel in a wheelchair through the Barajas airport and to undergo sessions in a hyperbaric chamber.

It played down its importance but, since its contagion, she has not raised her head.

In July, on tour, she had to interrupt her concerts and was admitted to the hospital Virgin of the Rocío of Seville for a month. They were complicated moments that did not transcend to the public.

What started as a Nephritic colic was complicated by septicemia that took her to the ICU for ten days, where a coma was induced. After several gangrenous fingers were amputated and he saw death up close, the soprano made a drastic decision: to separate from Matías Urrea, the military appeal that brought her down the aisle in June 2019, and with which she never legalized her marriage.

Her union with Matías Urrea, immortalized by Hello! with a dance that looked like a frame from the movie “Officer and Knight”, with a posh link in the castle of San Marco, has given rise to a soap opera.

A drama worthy of an operetta to be played tonight by the supporting actor, Captain Matías Urrea, who is presented as the last victim of the diva:

“I have been, for 6 years, her 24-hour personal assistant, communication director, manager, financial advisor, if she had charged for those jobs it would be a lot of money.”

Little is known of Ainhoa ​​Arteta’s personal life except that she has been married four times and has two children. From her parents, Esther Ibarrolaburu and José Ramón Arteta, she received 32 Basque surnames and unconditional support in her career as a lyrical interpreter.

Despite not having financial resources, she studied at the prestigious Actors Studio in New York and received singing lessons in Italy from the professor of Luciano Pavarotti. 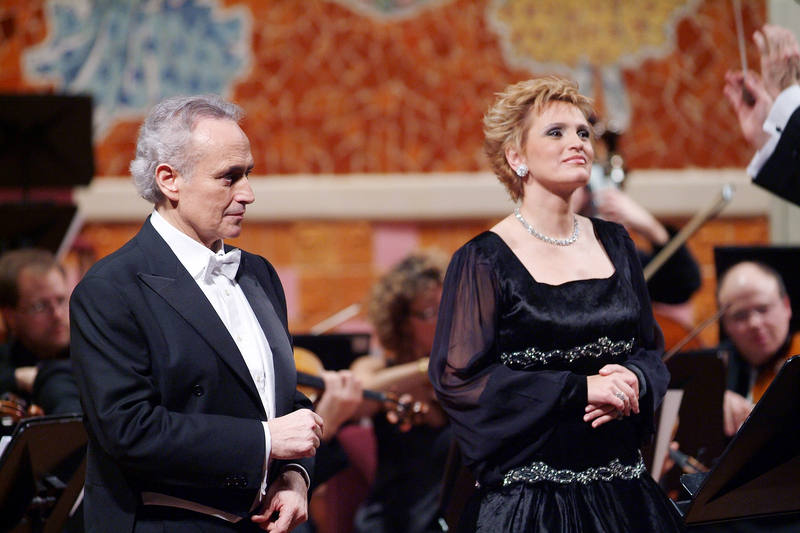 She has triumphed at the New York Metropolitan House, London’s Covent Garden, and the most prominent lyrical theaters in the world, thanks to her voice and to the support of Plácido Domingo, her great supporter.

Currently considered the best Spanish soprano, she has had a most hectic love life, and has dressed as a bride four times.

The first time was in 1988 with her youthful love, whose name did not transcend. Ten years later, she would marry in the City Hall of New York, with the baritone Dwyane Croft, father of her daughter Sarah.

The divorce caused a depression that forced her to make a break in her career. In 2005 she met the Basque rider Jesús Garmendia, with whom she would have a son, Íker in 2010.

They would end up secretly marrying in 2012 at the Fuenterrabía City Council and would divorce three years later. Later she met Matías Urrea, Murcian Lieutenant Commander, with whom after a long engagement, In 2019, there was a controversial “yes I want” in Puerto de Santa María.

Ainhoa’s silence, for now, will only be broken in the courts

It has been as a result of her separation from the military appeal with which, in reality, not legally married, when the name of Ainhoa ​​Arteta has stopped being heard in theaters to gain prominence on television sets.

The leaks of her ex-partner to the pink press about the causes of the end of coexistence and the portrait she has made of the diva, they have given the golden pass to Saturday Deluxe.

After confirming that Urrea is willing to talk about her intimate life, and even sell compromised recordings to Telecinco, the soprano has announced, in a statement, that will sue all those who have dedicated themselves to speculating on the reasons for his “marriage” and his break with the Murcian captain.

As her ex-partner prepares to break out on her, the singer is silent and not only on the recommendation of her legal advisor.

The artist has isolated herself in a hamlet that she owns in the Basque Country, where she is cared for by her family, and only answers calls from a small group of friends. Among them is one of her best friends, her relationship with Matías Urrea, who speaks with LA RAZÓN about the difficult time that Arteta is going through, emotionally and physically, after spending ten days in the ICU, several of them, in an induced coma.

According to this exclusive testimony, Ainhoa ​​broke up with Urrea after waking up from the coma. And it is that, After seeing death up close, the soprano knew that she did not want to spend the rest of her life with the military man.

Although it is not ruled out that the soprano may give her version of events in the future, for now, does not speak on medical recommendation. And it is that, after passing the Covid in January and the month of July in critical condition in a hospital in Seville, her vocal cords have suffered, endangering his livelihood.

And recovering her portentous voice and returning to the stage is now her only priority.

Inés Domecq, Alejandra and Eugenia Osborne, in the last goodbye to Mercedes Domecq

Amor Romeira is presented as a candidate for Eurovision 2022

Yadhira Carrillo is in mourning, Galilea Montijo sends him a message of strength