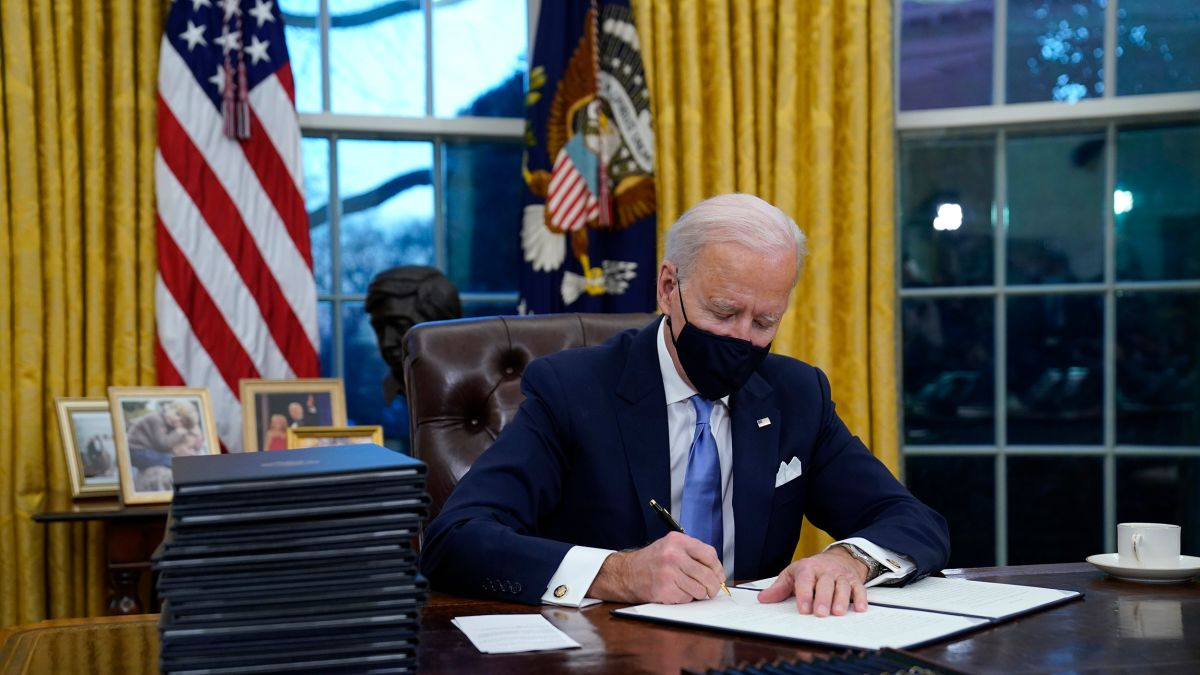 5 Things you should know this January 21: The First Decrees of Biden

President Joe Biden is suddenly waging a bitter confrontation on two fronts with America’s enemy in the Cold War – Moscow – and America’s adversary in what could be next: China.

Nasty personal insults fly between the White House and the Kremlin even as startlingly blunt rhetoric erupts in the administration’s first big talks with China to make the law on Biden’s tough new policy toward the dominant Asian powerhouse.

An extraordinary day of intercontinental disputes confirmed that US relations with China have fallen to their lowest point since President Richard Nixon’s pioneering mission to “open” the then isolated communist state in the 1970s.

Meanwhile, relations between the United States and Russia are at their most difficult point since the fall of the Soviet Union.

A simmering dispute with Russia escalated when Biden slammed Vladimir Putin as a “murderer” in an interview this week, leading the Russian strongman and his aides to brand the new US commander-in-chief as old and senile.

In Alaska, meanwhile, there were extraordinary exchanges in front of the press between US and Chinese officials on Thursday.

Secretary of State Antony Blinken spoke of the “deep concern” he had detected about China’s behavior during a tour of Asia and condemned China for breaking the rules that keep a “more violent world” at bay.

National security adviser Jake Sullivan defended the United States from Chinese criticism, saying it had a “secret sauce” that helped repair its imperfections, in a clear blow to China’s authoritarian state government.

China’s top diplomat, Yang Jiechi, further broke the normally stifling protocol of the US-China talks by asking, “Is that the way I hoped to conduct this dialogue? Well, I think we think too highly of the United States.

The exchanges, the diplomatic equivalent of a face-to-face fight that will reverberate across the Pacific, led a senior US official to accuse the Chinese of arriving “with the intention of being bombastic, focusing on public theatricality and drama above. of the substance ‘.

Given the fragile international situation, an attempt by a new American president to flex power so openly against two nuclear rivals might seem foolhardy.

But in any case, Biden is reacting to a strategic calculus that has changed since he served as vice president in the Obama administration, which sought to restore relations with Russia and based his China policy on managing the peaceful rise of the economic powerhouse coming in the east.

The assertive and nationalist authoritarianism of Chinese President Xi Jinping has since transformed China’s global outlook and its willingness to project strength. Now he is locked in a regional and increasingly global competition with Washington.

While lacking the strategic weight of the former Soviet Union, Moscow has made undermining US influence and domestic political cohesion a centerpiece of its global strategy, as evidenced by its meddling in two US elections.

It’s clear that Biden’s tough talk, boasting of America’s upcoming economic recovery and statements that “America is back,” is designed to undermine the shared view in Moscow and Beijing that America is seriously weakened for two decades in and out of the Middle East, its crippling political divisions and one of the worst responses to a pandemic in the world.

Biden’s insults of Putin and efforts to sideline other great Pacific powers such as India, Japan, Australia and South Korea before meeting with China send another message: that the chaotic foreign policy in which former President Donald Trump  fawned over autocrats in Moscow and Beijing, ignored allies, and undermined his administration’s sometimes difficult strategy on the rubbish heap of history.

Biden agreed with ABC’s George Stephanopoulos this week that Putin was a “murderer,” an extraordinary violation of protocol given that Russia remains a proud world power.

He also warned that the Russian leader would “pay a price” after US intelligence agencies concluded this week that he oversaw an effort to help Trump and affect Biden in 2020.

With the menacing ambiguity of a mobster, Putin wished Biden “good health” in response and challenged him to test his skills in an online debate.

In case anyone didn’t get the point, former Russian President Dmitry Medvedev, once seen as the great hope of restoring ties between the United States and Russia in the Obama era, responded with a direct insult referring to the age of Biden as the oldest American president.

“It seems that time has not been good to him. I can only quote Freud: ‘Nothing in life is more expensive than illness and stupidity,'” Medvedev said, according to the official TASS news agency. It is not the first time that attacks on Biden, and his age, by Russia and Trump seem almost identical.

Yuval Weber, a global fellow at the Kennan Institute at the Wilson Center, said Biden was sending domestic and political messages with his willingness to take on Putin so head-on.

“I don’t think there is any way to differentiate yourself more aggressively and sharply from President Trump,” Weber said.

“What Biden did was tell America’s national audience, as well as Putin, that there is a very different sheriff in town.”

Of course, there is a risk that personal disputes between Washington and Moscow offer Putin the platform alongside the US president that he longs for and believes that Russia has the right of a great power.

It’s hardly ideal when men whose fingers are on the world’s two most powerful nuclear buttons retreat into rhetorical corners. Still, Biden and Putin are seasoned leaders who know well the strategic risks of what was once a superpower showdown.

And Biden’s interview with ABC News also reflected the pragmatism underlying US-Russian politics. The president indicated that he was willing to respond to Putin’s macho approach while looking for areas of common interest when they arise.

He mentioned the renewal of the new START nuclear treaty in the first weeks of his administration. “It is overwhelmingly beneficial to humanity that we diminish the prospect of a nuclear exchange,” he said.

In reality, the United States is in a stronger relative position with Russia than with China, a much more powerful adversary. And common goal areas with Russia are limited in what is an overwhelmingly adversarial relationship.

Washington has come out strongly in support of opposition leader Alexey Navalny, who survived a poisoning for which he blames the Russian state and was imprisoned on his recent return to the country. Biden’s team also opposes the annexation of Moscow and the continued occupation of Crimea.

And he has vowed to revitalize the NATO alliance, which was frequently denigrated by Trump and has long been a key instrument of America’s global power.

‘Confrontational relationship when it has to be’

The meetings between American and Chinese diplomats never publicly showed the ugly scenes that unfolded in Alaska, reflecting the growing tensions between a bullish China and a United States defending its global primacy.

Things got off to a bad start after US officials made it clear that the talks were aimed solely at advising China that Biden plans to cement the Trump team’s shift from seeking cooperation with Beijing to open competition.

“Our relationship with China will be one of competition when it should be, of collaboration when it can be, and of confrontation when it has to be. And we will deal with China from a position of strength, “Blinken said this month.

Washington this week imposed sanctions on Hong Kong and mainland officials for their repression of democracy in the former British colony.

In another step that angered Beijing, the US Commerce Department issued subpoenas to several Chinese tech companies to see if they posed a national security risk in the United States.

There have been many rumors in the foreign policy world about the possibility of a new Cold War between the United States and China. If anything, that twentieth-century term does not encapsulate the breadth of the issues in dispute and the fact that, unlike the Soviet Union, rising Asian power is embedded in the global economy.

The disputes between the United States and China over Taiwan, Hong Kong, the repression of Uighur Muslims, the sovereignty of the South China Sea, espionage and the theft of American intellectual property are enormous. And Xi’s China has an industrial base and supply chains that are crucial to Western economies.

Advanced technology also gives Beijing back doors to the modern infrastructure of its potential enemies, which means that any new Cold War will likely take place in cyberspace.

Reflecting their growing power, senior officials in the Xi era are far more willing to berate Washington than in nearly half a century of US-China relations.

Chinese Foreign Ministry spokesman Zhao Lijian was enraged with a joint statement by the United States and Japan this week, as part of an effort by the Biden administration to create a united front of allies as a counterattack on economic power.

China’s strategic and military strategy designed to force Beijing to accept international rules that China rejects as an attempt to restrict its power.

“The international community will have a fair trial on who is the greatest threat to world peace,” Zhao said, according to the official Xinhua news agency.

A lesson from US foreign policy in recent decades is that plans hatched in Washington often do not survive contact with the outside world. So Biden’s plan carries some risk.

A more assertive American approach could sway Xi’s nationalist worldview and, if events in Alaska are any guide, it has already caused Beijing to be even more aggressive. An overall tense relationship could dampen the United States’ hopes of forging deals with China on tackling climate change at a world summit in Scotland this year.

And there is no certainty that America’s allies will accept Biden’s strategy. Asian nations must live with the reality of China’s growing power in their own strategic neighborhoods. Many doubt America’s attention span after several turns in and out of Asia in recent decades.

And it is far from clear that the European Union wants to choose between the United States and China, and it sent a signal to that effect by signing a trade agreement with Beijing just before Biden took office.