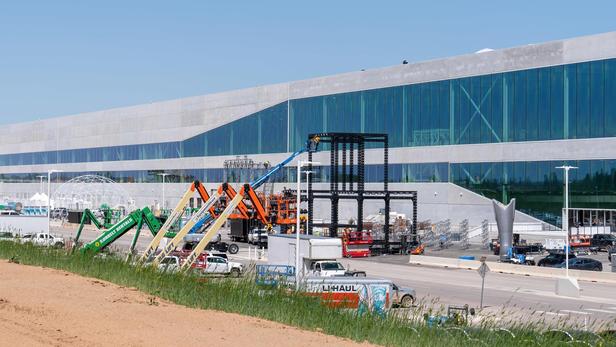 When Ford introduced its first electric pickup, the 2022 F-150 Lightning , last May , there was a lot of talk about the truck’s two-way cargo capacity. This feature will make it very attractive, especially in states susceptible to natural disasters, such as Florida and Texas, where electrical power is the first thing to lose, as it allows you to power a home for a couple of days.

Now Ford explains that the F-150 Lightning’s functions as an electric power provider go a little further thanks to the 240-volt Pro Power Onboard charger with 9.6-kilowatt capacity, which turns the pickup into a Level 2 mobile charging station. .

Ford offers a power cord with the SAE J1772 EV connector, the most common for electric vehicles today, allowing you to charge third-party vehicles that use the same connector. It is possible to use the mobile power cable in vehicles equipped with other connectors, such as the Tesla, but an adapter will be required.

In practical terms, this means that an F-150 Lightning equipped with the Pro Power Onboard charger can donate power at an average of 20 miles per hour of charge to a Ford Mustang Mach-E with an extended range battery, which is a long time. close to the time it takes to change a tire. In the case that the receiving vehicle is another F-150 Lightning, the charging hour adds 13 miles of autonomy, while in the Ford E-Transit this is reduced to 10 miles of autonomy.

The range achieved is directly proportional to the rate of performance of the electrical equivalent to a gallon of gasoline per mile, or MPGe, of the receiving vehicle, but it also depends on factors such as the condition of the battery, the external temperature and even the level of fuel. charge on the receiving battery.

When charging an electric vehicle that has run out of power on the road in an emergency, the function can be a real lifesaver, since it avoids the driver of the unloaded car having to expose himself to waiting for the arrival of a tow truck to take him. home or the nearest charging station.

“There are hundreds of benefits to Ford Pro Power Onboard, and we’ve added one more,” said Patrick Soderborg, Ford’s electronic powertrain systems engineer in a statement announcing the new feature from the manufacturer. “Carrying power on the road or having extra power at home brings a lot of convenience and safety, and using the F-150 Lightning to charge a friend’s electric vehicle or help them through a blackout is one of the many new benefits our customers get from our Ford electric trucks. “ How to optimize the fuel consumption of your car