After the tragedy that occurred against Salvadoran Victoria Salazar, who died when police officers fractured the vertebrae in her neck in Tulum, now another alleged police abuse was caught in Tijuana, Baja California.

In social networks they denounced that two municipal policemen used brute force on a person in the Alemán neighborhood of the Central Zone Delegation, without apparently the man committing any crime.

The person who recorded the video said that the attacked, identified as 26-year-old Erick Santiago Zamano Quiroz, by trade as a painter, like every day would have gone to buy omelets for breakfast.

It was then that two agents of the Tijuana municipal police arrived, entered the premises and tried to handcuff him by force, without allegedly having committed any crime, within the commercial establishment before the astonished gaze of those present.

In the video, recorded by those who were witnessing the scene, the two municipal police officers of Tijuana are observed, who try to handcuff Erick Santiago, but after the man’s efforts to get away from the agents, the same uniformed men sought to subdue him with excess force, to the point of almost suffocating him, when one of them squeezed his neck with his arm.

As they were unable to submit him, the officials would have taken photographs of his voter identification card and, according to witnesses, they would have taken away the little money that he had with him, in addition, he allegedly was threatened that if he said something, they already knew where he lived, so now he fears for his physical integrity and for himself and his family.

Last year the police killed Yahir López, he did not see his son born.

The man who died a victim of police abuse in Tijuana on March 28 was Yahir López, he was 28 years old and worked as a security guard to support his family, his widow said: “I don’t really know why they said it (that he was destitute) if he did have a family, he had us”.

The woman, who preferred to omit her identity, mentioned that before meeting him, the young man was studying at the university but had to leave it due to lack of money and to have a full-time job.

Their relationship lasted four years and together they had two children, a two-year-old girl and a baby who was born a week before Yahir’s death. “A week after having our second baby, he was excited because he had a baby, and this happened to me.” 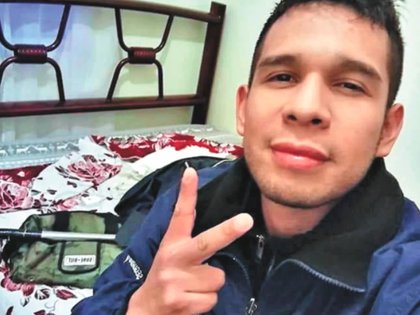 Yahir did not see his son born, a week before he died at the hands of the police in March 2020 in Tijuana.

“I watched it (the video) and said how it was possible, how much evil there was with those policemen; but I still didn’t know it was him, until they gave me the news. I cried too much, I couldn’t believe it was him. “

A day later they gave her the news of the death and that the viral video that she had seen on social networks were the last minutes of her husband, whose body was claimed by relatives and buried on April 2; the Central Prosecutor’s Office announced that the cause of death was broken neck due to asphyxiation.

The death of the young man, which occurred in the Manuel Paredes neighborhood of this border, was recorded and narrated by men who were filling the gas tank while Yahir was on the floor.

It is their voice narrating what they were seeing: “They are suffocating him, he is turning purple, he is no longer moving and they begin to scream: they killed him, they killed him.” Initially it was argued that the arrest was for throwing stones.