At 200 km/h, A Colombian influencer ‘La Liendra’ was recorded driving a Porsche vehicle

The state media of North Korea claim that the orphans are volunteering to work in state farms and mines.

The Korean Central News Agency (KCNA) indicated that hundreds of minors “with wisdom and courage in the prime of their youth” have chosen to do manual labor for the state.

It is not clear what their age is, but the photos suggest they are teenagers.

In February, the BBC reported on allegations that generations of South Korean prisoners of war were being used as slave labor in North Korean coal mines to generate money for the regime and its weapons program.

Around 26 million people are believed to live in North Korea, which is led by a government with rigid control over all aspects of people’s lives.

I have interviewed several North Korean defectors who claim to have been forced to work in the country’s coal mines.

The conditions they described were horrendous. They remembered habitual fatal accidents and long hours of hard work with food shortages.

Few would choose this job and I am sure that many human rights organizations will look at these reports and photos from the state media with real concern.

There is also a broader question to answer: why is North Korea seeking free labor for its mines, farms, and factories?

It is going through very difficult times after Kim Jong-un cracked down and completely sealed the border last January to stop the spread of covid-19 from neighboring China.

There are reports that some essential supplies are finally arriving in the country, but certainly not enough to get the economy moving again.

The only way to do this is to increase production and for that the regime needs new sources of free labor.

Praising the “wisdom and courage” of these young “volunteers” also makes them role models for the Communist Party.

Is it so being idolized for their self-sacrifice.

This also occurs when Kim Jong-un is trying to suppress any dissent from the youth in the country.

The leader has described foreign news and media, drama and music, such as K-pop, as “dangerous poisons.”

When times get tough, you don’t want your people to know that others may be better off, especially if you’re sending your youth to the coal mines. 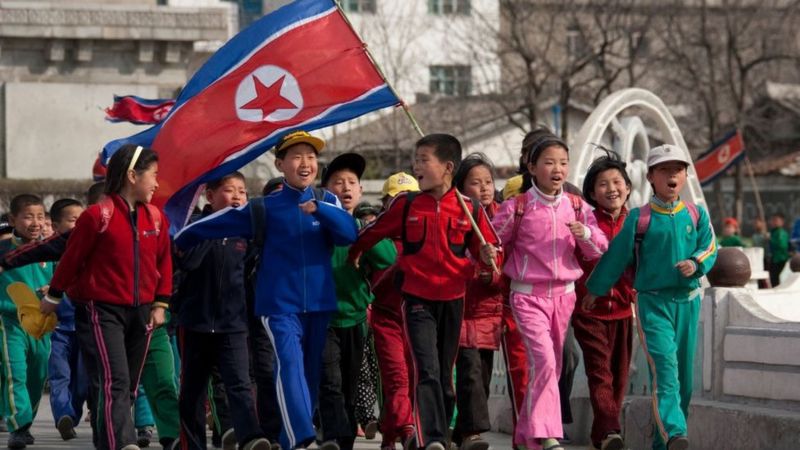 In April, in a rare admission of trouble, leader Kim Jong-un warned his country to prepare for the tough times ahead.

North Korea closed its borders in 2020 due to the coronavirus pandemic, halting trade with China, its economic livelihood.

Over the past week, various reports in state media have noted that so-called volunteers are doing manual labor across the country.

On Saturday, the KCNA report said that 700 orphans had volunteered to work in factories, farms and forests.

And on Thursday, KCNA reported that “dozens of orphaned children rushed to the Chonnae Area Coal Mining Complex to fulfill their oath to return only one millionth of the love that the party has given them.”

NEW: North Korea is claiming its children have “volunteered” to work in coal mines:

According to the document, officials sometimes send school children to work “to help complete special projects, such as snow removal on major roads or meeting production targets.”

It also indicated that minors under the age of 16 or 17 were “enrolled in military-style youth construction brigades for 10-year periods” and suffered from “Physical and psychological injuries, malnutrition, exhaustion and growth deficiencies as a result of required forced labor ”.

Earlier this month, the country accused US President Joe Biden of a “hostile policy” toward North Korea as Washington prepares to publish the new US strategy to deal with Pyongyang and its nuclear program.