The Medal Country Club was attacked on Thursday morning

In the early hours of Thursday at least six hooded criminals entered a gated community house Medal Country Club de Pilar, located at kilometer 10 of Route 34, and assaulted a family consisting of a young couple and two children aged 8 and 10. The gang bound the victims with sheets and took $ 6,000 and 5,000 pesos.

It all started while the family slept. Around four in the morning, its four members were surprised by thieves who wore hoods, masks and were heavily armed. After threatening them, the criminals tied their hands and feet and locked them in a room in the house. After that, the band managed how they wanted inside the house and, in addition to the money, he managed to take four computers and several other valuables.

According to the agency Telam, the investigation is in the hands of the UFI Nº 4 of Pilar, in charge of the prosecutor Gonzalo Agüero. Personnel from the 1a de Pilar police station and the DDI also intervened to analyze the security cameras of the place.

In this sense, the investigators believe that the criminals arrived at the scene in a vehicle that they would have left in the area and thatand they entered cutting a side fencing. The neighborhood is under construction and has few inhabited houses . The place has private security personnel, which is located at the entrance of the property.

According to the local media Daily PillarIt was not the only event within a country in that Buenos Aires match that occurred in the last hours, and with the same modality. The closed neighborhood Casuarinas del Pilar, at dawn yesterday, was the scene of another similar assault.

It happened minutes before 5 in the morning, with the circulation restrictions due to COVID-19 in force. There, a 53-year-old man was surprised by five armed robbers at his home while he was resting with his family.

Threatened at gunpoint, the criminals tied the victims’ hands and feet with shoelaces, to later steal money, jewelry, cell phones, among other valuables. It is believed that the criminals entered through a neighboring lot, after cutting the perimeter fence. Between the Medal Country Club and the Casuarinas there are about 18 kilometers of distance. In the latter, personnel from the Scientific Police intervened and the investigation was again in the hands of the Functional Instruction Unit No. 4, in charge of prosecutor Agüero. 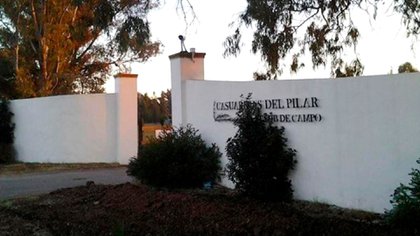 Casuarinas del Pilar, located in the town of Zelaya (Pilar district), was also the scene of an assault

According to the newspaper, the robbery in Casuarinas del Pilar is the third one that registers so far in 2021. The first took place on February 5, when armed and hooded criminals tied up a 69-year-old man and his 31-year-old son. The other took place on March 27, when four robbers with their faces covered gagged and bound a woman and his two daughters.

Another hit to a country, this time in Luján

Last Monday night Four armed men with their faces covered by masks entered a house in the Arroyo Dulce gated community on General Savio street in Luján, province of Buenos Aires. There, a couple of 72 and 73 years respectively. According to police sources cited by the agency Telam, the robbery occurred around 10:30 p.m. The hooded men entered the country and they entered the house through a window.

Later, surprised their victims while resting and They stole 200 dollars, cell phones and jewelry after several threats at gunpoint, according to what sources in the file confirmed to Infobae. The victims were unharmed, however, the criminals locked them in a bathroom to avoid being betrayed, their hands tied with seals. Thus, they fled.

According to the first versions of the case, they were not seen by security cameras during their escape. Personnel from the Luján Police Station No. 1 arrived shortly after the scene of the incident, while the private security company that guards the country covered the perimeter. Intervened UFI No. 9 of the jurisdiction, which was on duty.