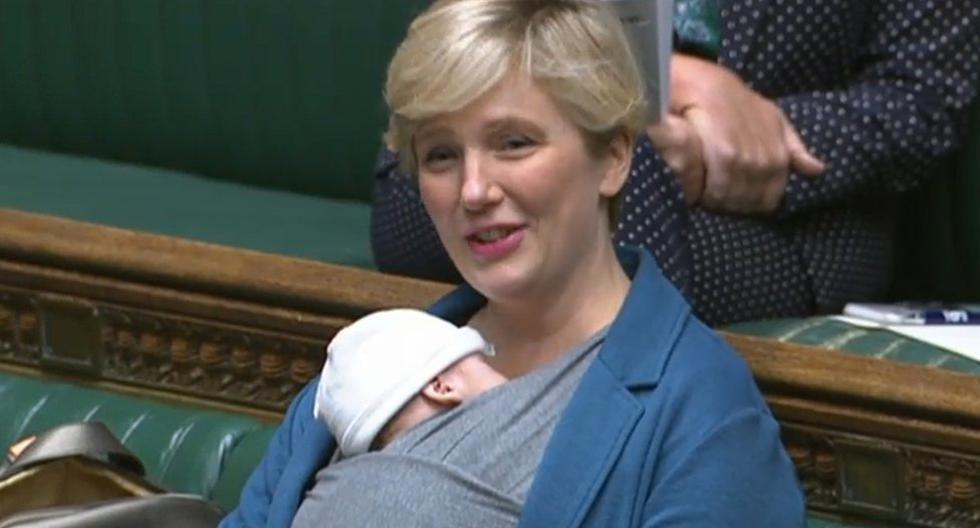 Babies banned in Parliament: the controversial reprimand in the United Kingdom to a deputy who debated with her child in her arms

The German Greens probably never imagined that with them in Government, Germany would decide to increase coal-burning to secure energy supplies. But the realpolitik It has hit the environmentalists squarely, particularly its most prominent member, Robert Habeck, the Minister of Economy and Climate in charge of keeping electricity and gas reaching industry and homes. He has been announcing that the German Executive will have to reactivate its old coal plants, a fuel it had promised to abandon before 2030, given the risk of a lack of energy supply due to Russia’s invasion of Ukraine.
The Government, a tripartite led by the Social Democrat Olaf Scholz, announced this Sunday a series of measures to reduce the amount of gas used to generate electricity and supply industry. The priority now is accelerating the filling of the gas tanks to reach almost 100% capacity by autumn. The decision, which Habeck released in a statement, comes a few days after Russia cut the flow of gas it sends to Germany by two-thirds, citing technical problems. Habeck described the decision as “political” and assured Moscow’s objective was to increase the price of hydrocarbons as a measure of pressure.

The situation is serious, Habeck warns. “Gas consumption must continue to fall, so more gas must be stored. Otherwise, it will be very tight in winter,” he says. Currently, gas storage facilities in Germany are around 57% full, according to data updated Friday from the Federal Network Agency. The Federal Government’s goal is for gas storage tanks to be 80% complete by October 1 and 90% full by November 1, to prepare for potential bottlenecks.
The green minister is aware of what it means for his party and his voters to decide to use more coal to produce electricity: “It is something bitter, but necessary,” he says.

Habeck is currently the most valued minister in the coalition, something to which his way of communicating has contributed. He usually records videos he posts on his social networks in which he directly addresses citizens to explain his policies. It is not the first time that he has told how painful it is to make decisions that go against climate protection. “To reduce gas consumption, less gas must be used to generate electricity. Instead, more coal-fired power plants will have to be used,” the statement said.

Germany’s decarbonization objective seems to be taking a backseat in dealing with the current situation, in which it runs the risk of a gas supply cut-off from Russia when it is in the process of filling its deposits. However, a few weeks ago, Habeck’s department assured that in case of having to pull the coal – it was announced that the plants were left on stand-by, in reserve, in case an emergency occurred – it would be something specific that does not jeopardize the country’s climate commitments.

The Greens pushed to include a new date for Germany’s coal phase-out in the coalition agreement with Social Democrats and Liberals. Former Chancellor Angela Merkel set that output for 2038, but environmentalists demanded it is brought forward to 2030. The war in Ukraine has disrupted those plans, and now the objective can be no other than to accelerate the reduction of its current energy dependency on Moscow.

Another possibility some voices in Germany fantasize about, such as the extreme right-wing AfD, that of delaying the closure of the last nuclear reactors, has been ruled out. Instead, Habeck has called on operators of reserve coal-fired power plants to “prepare now so that everything is operational as soon as possible.”

The country will have to increase coal burning, Habeck notes in the statement. Russian gas company Gazprom announced on June 15 that it was cutting supplies through the Nord Stream 1 pipeline for technical reasons, citing delays in repairs to compressor turbines by German company Siemens Energy. Berlin does not believe the excuse and assures that the Kremlin’s objective is none other than to force European countries to buy more gas on the daily market to raise prices artificially.
The country will be very fair in meeting its environmental objectives because it had already been burning more coal than it should have. Last year, before the energy crisis started, Germany produced almost 28% of its electricity from coal. Much of it is imported, but some ore is still extracted in open-pit mines on German soil. It is lignite, the dirtiest there is, the most polluting.

The coalition government has also proposed initiatives to reduce private energy consumption, such as lowering the temperature limit at which owners are required to maintain heating in rental flats. In addition, the other coalition partner, the FDP Liberals, is proposing to review the current ban on extracting shale gas in Germany with the controversial fracking technique. As scientific studies show, fracking does not cause any relevant environmental damage under modern safety standards, ” assured the head of the liberal parliamentary group, Torsten Herbst, to the newspaper world on Sunday.

Habeck also proposes a gas auction model for the summer that would give industrial gas consumers incentives to save. Industrial customers who can do without the hydrocarbon could reduce their consumption for a rate that is financed through the market. The gas that they did not use would be stored. On the other hand, the Government is planning an additional credit line of 15,000 million euros through the state bank KfW to allow the German gas market area Trading Hub Europe (THE) manager to buy gas to fill the storage facilities.