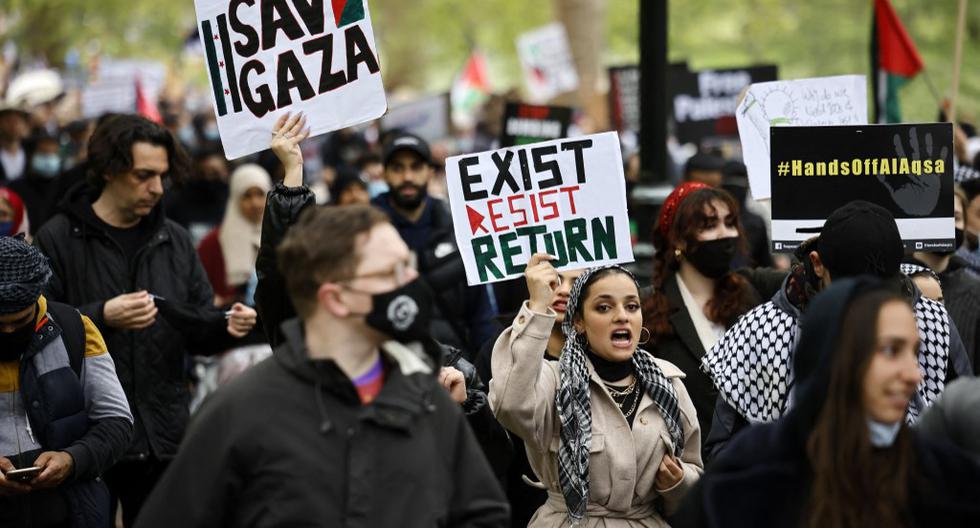 A Pro-Palestinian demonstration gathers thousands of people in London

Increasingly exasperated inhabitants and red economic indicators: the strategy china from “zero covid” – health and propaganda success celebrated tirelessly by the official media – seems on the way to becoming a disadvantage for the president Xi Jinping.

Although the “zero covid” made it possible to limit the official balance of deaths to a few thousand –in a country of 1.4 billion inhabitants– this policy weighs heavily on the economy and morale due to its facets of forced quarantines, reduction of air connections, non-issuance of passports except for reasons considered essential and incessant PCR tests.

Unlike a West almost paralyzed by the epidemic in the past two years, China had already resumed almost normal life since the spring of 2020.

Since then, the health policy has been praised in China as a symbol of Xi Jinping’s leadership and the superiority of the Chinese system over liberal democracies.

A fervent defender of “zero Covid”, the 68-year-old leader should obtain a third term at the head of the Communist Party (PCC) at the end of 2022.

But the current wave of the omicron variant in China highlights the negative aspects of this health policy, and discredits the image of the president.

Hundreds of people have died from the coronavirus in recent weeks in Shanghai, where the population, confined for almost two months, is on the edge.

The economy is beginning to falter due to the lockdowns imposed across the country, which prevent many Chinese from traveling, consuming and even working.

Not forgetting the disruption of supply chains.

China on Monday admitted its worst economic performance in two years, with consumption low and unemployment near record highs. Not making more flexible “the + zero covid + runs the risk of making the Chinese strategy appear stubborn, uncreative and not very judicious,” Vivienne Shue, a professor at the University of Oxford, tells AFP.

But Xi Jinping called for continuing this policy “unfailingly”, stating that he wants to put the lives of his compatriots above economic considerations.

The year 2022 is crucial for him. At the 20th CPC Congress, to be held in the fall, the top leaders should, barring great surprise, grant him a third five-year term as general secretary.

Meanwhile, to try to save the economy, his prime minister Li Keqiang appealed this week to a “sense of urgency” in local communities to launch support measures.

However, at the social level, local politicians have little room for manoeuvre.

The president, already the most powerful Chinese leader in decades, is so associated with “zero covid” that he has no choice but to zealously pursue this strategy, according to experts.

“Challenging this policy would mean questioning him,” says Alfred Wu, a China specialist professor at the National University of Singapore.

“It is difficult to know if the elites of the Communist Party have other opinions” than Xi Jinping on the health situation, says Joseph Torigian, a specialist in authoritarian regimes at the American University of Washington.

In any case, “Chinese politics is not a popularity contest”, a criterion that is not decisive for gaining power, he stresses.

A few months before the CCP Congress, giving up the +zero covid+ policy would be a considerable risk for Xi Jinping, according to the US group SinoInsider. “Today more than ever, it would be political suicide,” he says.