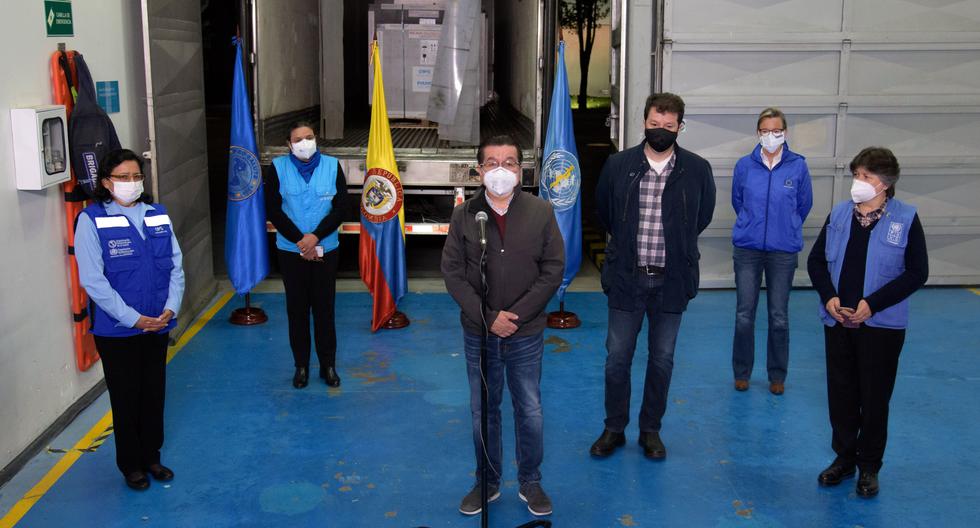 Colombia receives almost one million vaccines from AstraZeneca through Covax

At least one person has died in Russian suicide drone attacks on Monday in the center of the Ukrainian capital and three others have been injured, kyiv Mayor Vitaliy Klitschkó said.

“The body of a dead woman was recovered from the rubble of a building in the Shevchenkivskyi neighborhood, where an explosion occurred as a result of a drone attack,” the councilor wrote on his Telegram account.

Another person is under the rubble, he added, and three injured people have been hospitalized.

According to the mayor, a total of five explosions were heard in the capital with kamikaze drones.

One of the explosions occurred in a residential building.

So far 18 people have been rescued from under the rubble.

Klitschkó explained that a total of 28 drones flew to kyiv in the morning, and that, thanks to the Armed Forces and anti-aircraft defense, “most of the flying terrorists were shot down.”

In a photograph of the remains of a drone published by Klitschkó, ​​”Guerán-2″ can be read, which is the Russian name for the Iranian unmanned device “Shahed-136”.

Interior Ministry adviser Anton Gerashchenko in turn recorded a video in which he holds in his hands a piece of a drone that was shot down by four uniformed “heroes,” he said.

These men were close to the unmanned vehicle and, hearing and seeing it, quickly opened fire with their pistols and machine guns against the object, according to what they said in the video.

Adviser to the Office of the President of Ukraine Mykhailo Podolyak asked on Twitter to exclude Russia from the G20 after the attack on the capital, the second in a week.

“Those who give orders to attack critical infrastructure to terrorize civilians and organize a full mobilization to cover the front with bodies, surely cannot sit at the same table with the leaders of the G20. The Russian Federation has to be expelled from all platforms. international, he tweeted.

Earlier, Ukrainian President Volodymyr Zelensky said that “every night and every morning the enemy terrorizes the population. Suicide drones and missiles attack all of Ukraine.”

“The enemy can attack our cities, but he will not be able to break us. The occupiers will receive just punishment and the condemnation of future generations. And we will win,” he stressed.

His chief of staff, Andriy Yermak, stressed in turn that Russia believes that kamikaze drones with explosive charges “will help him in his agony” on the battlefield.

“We need more anti-aircraft defenses and we need them as soon as possible!” he stressed.

“We don’t have time for slow actions. More weapons (are needed) to defend the sky and destroy the enemy,” he emphasized.

In those bombardments, Russia used various types of kamikaze missiles and drones.

kyiv was also attacked, as there were two hits in the Shevchenkivskyi district. Six people died as a result of the bombing.