The King of the Gypsies will defend his unbeaten record and the WBC heavyweight championship belt this Saturday in front of 94,000 people 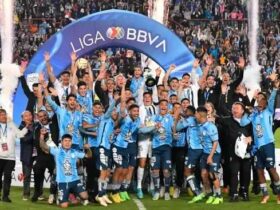 Pachuca beats Toluca and crushes its rival 8-2 on aggregate to win the 2022 Apertura, which meant its seventh title in Liga MX

A new boxing evening will take place this Saturday with the British fighter Tyson Fury as the main protagonist. The King of the Gypsies will defend his World Boxing Council (WBC) heavyweight belt and his unbeaten record in front of 94,000 people at Wembley (UK record), in what should be the last fight of his career, against his countryman Dillian Whyte .

Fury , 33 , declared that his first fight in his country since 2018 could also be the last of his career, since he would not seek the unification of titles in the heavyweight category, against the winner of the possible rematch between the Ukrainian Oleksandr Usyk , current holder of the WBA, IBF, and WBO belts , and English boxer Anthony Joshua.

“I’ve been a two-time uncontested champion, I’ve got 150 million in the bank, I don’t have to prove anything to anyone,” the Gipsy King declared last month , promising he would be “retired full-time after the fight.”

His sports career has been a real Russian coaster. He went from being an enigmatic character who went through severe depression and drug dependency to dethroning Wladimir Klitschko in 2015 , which catapulted his career on a grand scale. He now has an unbeaten record at 33 wins (22 KO’s) and is one of the heavyweight stars.

However, Fury cautioned that his adversary and former sparring partner is a fighter who deserves respect. “ He is a good fighter. He has a good punch with great power, he has done many KO’s” , explained the King of the Gypsies at the press conference that took place on Wednesday. “I see that the bets are in my favor and I laugh a little, because they come from people who don’t know anything about boxing. It’s heavyweight boxing, anyone can win with one punch. If I’m not in my best shape, this guy will rip my head off ,” he argued.

For his part, Dillian Whyte , 34 , has a record of 28 wins (19 KO) and two losses. He has a lot to prove because he has been presented with the opportunity he had long awaited, after having felt unfairly pushed aside by Fury when he chained three fights between 2018 and 2019 against the American Deontay Wilder , without having given a chance to Whyte’s challenge.

His story is from a movie. He was born in Jamaica but moved to the UK with his family at the age of 12 , and a year later he became a father for the first time. Whyte was also shot and stabbed after joining London youth gangs.

“If I weren’t a boxer, I would surely be dead or in jail,” he declared in an interview with The Guardian in 2020. Despite this, the athlete who also practiced kickboxing and MMA sees himself as the man who will finally bring Fury down . He is not happy with the distribution of profits, clearly in favor of his rival (80% versus 20%) with a total amount of USD 41.2 million . But Whyte is ready to step up. After receiving KOs against Joshua in 2015 and Russian Alexander Povetkin in 2020, he wants to emerge victorious in a high caliber fight.