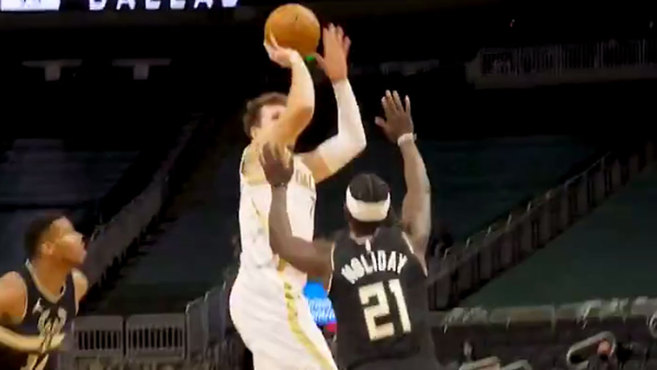 “Luka Doncic has once again broken a mark that had been left by some legend in the pages of NBA history.” It will not be the first time (or the last) that you read this. “Luka Doncic Beats Michael Jordan”. Three quarters of the same. This time it was the triple-doubles, a few months ago the triple winner over the horn in the overtime of a playoff game, almost two years ago the average of points, rebounds and assists as a rookie … In a league (and a sport in general) closely linked to statistics, the Slovenian player is a vein. The temptation to compare him with the greatest of all time is present in every corner and the desire to confirm how the student surpasses the teacher is too strong to pass by. But in the end they are just numbers that, although they indicate that we are facing a very special player (it is not necessary to go to the data to realize that), They cannot determine on their own that Doncic is walking the path that Jordan began 36 years ago.

The comparison with the 23 of the Bulls has been the yardstick of whom he presented himself (others almost always presented him) as the new messiah. It was for Kobe Bryant, for LeBron James and now for Luka Doncic as the most outstanding player of his generation. Whoever abandons the cold data for a moment and stops to watch the games, will realize that Doncic actually has very little to do with Jordan (to say nothing) in the way he plays. It is curious that among the references that the Slovenian has referred to as inspirations to dedicate himself professionally to basketball, he has never named him. It is not so surprising, however, when one looks Doncic’s birth certificate and realizes that when he was born, Jordan had already won all six of his rings with the Chicago Bulls. He never saw him play, nor did he see Magic Johnson and (much less) Oscar Robertson. And to these two it does look a lot more similar.

Doncic’s idol was always LeBron and that, surely, is the mirror in which he looks at himself as the son of the 21st century that he is. In these last 20 years, of course, there is no better place to look for reflection. But Jordan’s shadow is very long and the comparisons always end with him. Meanwhile, Doncic goes about his business. Installed in the elite of the American league by right, aspiring to the MVP, being the owner and lord of the game of an NBA franchise. All this with 21 years. And also missing more triples and free throws of the account, improving step by step his regular defense and committing (very from time to time) errors in decision making. These are normal things for a 21-year-old player. But also calling himself “selfish” for playing a bad second half in the last loss of the Mavs, in which he signed the 29th triple-double of his career (36 points, 16 rebounds and 15 assists). The one that made him pass Jordan, an ungrateful mirror for almost everyone. People are already putting it in front of him, even if he doesn’t want to look at it yet. You know you have a lot left for that.