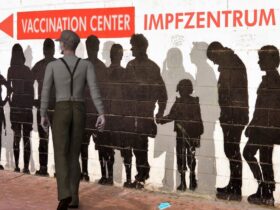 Snow covered the French capital on Saturday to the joy of many Parisians, after the national meteorological service issued a snow and ice warning for much of the north of the country for the day.

In Montmartre, the locals gathered to enjoy the view and play in the snow – a rare enough sight for Paris to attract many tourists.

The best known monuments, such as the Eiffel Tower or the Basilica of the Sacred Heart in Montmartre, they have been covered in white and many children have taken advantage of the hills to play with makeshift sleds.

This year’s winter weather threw snow over Paris for the first time since February 2018.

This snowfall provided a moment of relief for some as the country gears up for a nightly curfew starting at 18:00 (17:00 GMT) in the fight to curb the COVID-19 pandemic.

On the other hand, the snowfall left more than 5,000 homes without electricity in the Alsace region of north-eastern France, as confirmed by the supplier Enedis.

And the department of Alto Rín, in the south of the border region, has been particularly affected by falling snow, which is causing chaos in multiple areas of the country.

The meteorological service Meteo France has warned residents of central and northern France to have special care these days, starting with Paris.

On the night from Tuesday to Wednesday hundreds of motorists were blocked for several hours on the A40 motorway, to the east of France at the foot of the Alps, because of a heavy snowfall that surprised the authorities with its intensity.

The city council of the town of Valserhône opened gyms so that several dozen people who had been trapped could spend the night there. Due to the difficulties to circulate, the passage through a part of the A40 -which connects the French city of Mâcon with Geneva, in Switzerland- was prohibited to trucks and motorists were discouraged from using this route.

Also, from this Saturday and for at least 15 days. The government will impose a national curfew from 6:00 p.m. to try to contain COVID-19 infections.

“Except for exceptions related to public service missions, all places, shops or services that receive the public will close at 6 pm”said Prime Minister Jean Castex. Although shops are open, restaurants, bars, museums and cinemas have been closed for more than two months.

With information from Reuters, EuropaPress and EFE

Concern in France about the high rate of depression among confined university students: a student’s suicide attempt set off the alarms