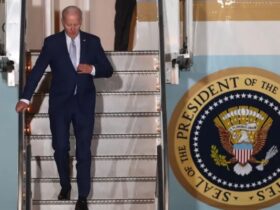 Fulton County District Attorney in Georgia Fani Willis suggested Tuesday that the special grand jury investigating efforts by Donald Trump and his allies to change the outcome of the 2020 election in that state recommended multiple indictments, saying that his decision to press charges is “imminent.”
At a hearing in Atlanta on whether or not to release the special grand jury report, Willis, a Democrat, said she opposes making it public at this time, citing her ongoing deliberations on the charges.

“We want to make sure that everyone is treated fairly, and we believe that in order for future defendants to be treated fairly, it is not appropriate at this time for this report to be released,” Willis said.

The special grand jury, which was barred from issuing indictments, produced the highly anticipated final report as the culmination of its seven months of work, which included interviewing witnesses from Georgia Secretary of State Brad Raffensperger to Donald Trump’s former lawyer. , Rudy Giuliani.

The special grand jury heard a total of 75 witnesses, Willis said Tuesday.
Your final report will likely include some summary of the panel’s investigative work, as well as any recommendations for prosecution and the alleged conduct that led the panel to its conclusions.

The jury report was presented to Willis, who could use the information as evidence for a second grand jury to consider the indictments. At this point, the district attorney has not made any final decisions on whether anyone should be charged, said Donald Wakeford, an attorney for the prosecution.
A media consortium has asked Judge Robert McBurney to make the report public, as the grand jury has recommended.

The hearing ended without Judge McBurney ruling on the issue. He only told the parties that any possible public disclosure of the report will happen “a little bit later.”

Trump is under investigation in Georgia for his efforts to reverse his defeat to President Joe Biden in that state, which was instrumental in the outcome of the 2020 election. That effort by the former president involved pressuring the Georgia secretary of state to find enough votes for Trump to overcome his margin of defeat against Biden.

Trump lost the 2020 election in Georgia by a margin of 12,000 votes.
The grand jury did not have the power to issue indictments in the case. That decision is left to Willis.
Trump’s lawyers told NBC News on Monday that they would not be present or participate in the hearing, saying they assumed the grand jury did not find that Trump violated the law.