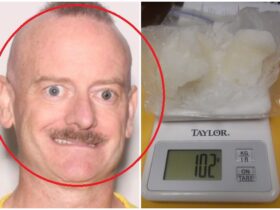 The forest fire that has already consumed more than 2,000 hectares has also affected 15 homes that were burned by the scope of the fire. The authorities reported that the total number of evacuees reaches 25 thousand people due to the possible arrival of the fire in residential areas of Quilpué, in the central coastal zone of Chile.

Two thousand hectares completely consumed by flames. 15 homes, some of them residential and other tourist, thousands of people evacuated given the risk of fire spreading to their homes and a climate that has made work to combat the incident more difficult. Besides, the National Forestry Corporation CONAF and Firefighters of Chile, confirmed that according to information provided by the community, it is an intentional arson. The Chilean justice opened an investigation and the President Sebastián Piñera announced a criminal complaint against those who turn out to be responsible.

The same inhabitants of the sector of the Lago Peñuelas National Reserve have provided information to the police on the intentionality of the accident that has already consumed more than 2,000 hectares

The latest update was given by the authorities of the National Emergency Office (ONEMI) in which it was revealed that “se keep forest fires active of the La Engorda Lake Peñuelas National Reserve and Hacienda Las Palmas 2 sector and an area of ​​2,000 and 70 hectares respectively has been consumed.

In addition, the entity detailed that the emergency has preliminarily left about 15 homes destroyed, among which are houses and cabins, some of which were uninhabited for being for recreational use. On the other hand, ONEMI provided details of the traffic in the area, warning that The circulation of vehicles in both directions is still interrupted on route 60 CH, which connects with the capital, the South Trunk, towards the commune of Viña del Mar among others. “The Intendancy of the Valparaíso Region, based on the technical information provided by CONAF and in coordination with the ONEMI Regional Directorate, maintains the Red Alert for the communes of Valparaíso and Quilpué”Added the statement. Finally, he adds, “various shelters have been set up for the population”, a total of 5 so far.

They confirm it was intentional

Both CONAF and the government authorities deployed in the area, stated that there is sufficient evidence to confirm that the incidents were intentional. Therefore, the Valparaíso regional prosecutor’s office announced that the prosecutor of Quilpué, Carlos Parra, opened an investigation to find the whereabouts of the person or persons responsible. “Instructions have been given to personnel of the BIDEMA Environmental Brigade of the PDI Investigations Police, in order to carry out in the place, once the emergency is over, at the point of origin of the same, to determine the causes of this forest fire and obtain the greatest amount of information to determine its intent and its possible authors “he warned.

For her part, the CONAF Forest Fire Protection Manager, Aída Baldini, said she regretted “that this fire is intentional, since the fire started or they turned on the first light at 9 p.m., knowing that the aircraft cannot fly, they cannot fight the fire. An hour later they turned on a second bulb who wanted him to join, fortunately that focus was controlled ”, he declared.

The Government announced a complaint

Through a video, President Sebastián Piñera joined the statements of other authorities and warned that those responsible will be sought until the last consequences. “We have indications and suspicions that the origin of the fire was intentional and so we have filed a criminal complaint to punish and sanction in an exemplary way those Chileans who are willing to burn their own country. Throughout the day we have been closely following the fire that started last night. Fortunately we do not have to regret the loss of human life, but we do have to regret that serious damage has been done to the area”Declared the Head of State.

Finally, he highlighted the work carried out by the communities, CONAF officials, firefighters and the police who work in the area, noting that they are already looking for those who started the fire. “Believe me we are going to chase you, not only because of the material damage that can be done to families, but also that many human lives could have been risked and what is worse, hundreds and hundreds of hectares of forest, flora and fauna, which is very important for this region as well ”, he pointed out.

In the early hours of Saturday, the fire has remained “contained”, however the same authorities have reported that it has not yet been possible to control it

The President of the Regional Council of Firefighters from the Valparaíso Region, José Molina, declared that although the incident “is not controlled“, Given the difficult environmental and climatic conditions of the land and the rapid advance of the flames,” yes, the greatest danger to homes has passed, the population can be calm“, he claimed.

For its part, the Minister of the Interior, Rodrigo Delgado, stated that although there is no imminent danger of spread to homes, there’s still a long way to go for the fire to go out. “We can give certainty that work will continue. A Navy plane will be monitoring the different sectors with an infrared camera to monitor the movement of the fire, “he said.

Since the morning of this Saturday, in the affected area Firefighters continue to work with 61 units in the country and over 450 volunteers, to which communities and volunteers and teams from CONAF, Carabineros and the Chilean Navy also join.