Donald Trump is acquitted in his second impeachment trial for insurrection

Almost a week after Ever Given ran aground in the Suez Canal and stopped the circulation of more than a tenth of world trade, the freighter was finally released.

Osama Rabie, head of the Suez Canal Authority, announced this Monday “the success of the maneuver” to unblock the ship, which had got stuck last Tuesday.

“We got it!” The Dutch company Boskalis, hired to help with the operation, said in a statement.

“The Egyptians have achieved today put an end to the crisis“Said the country’s president, Abdel Fattah al Sisi, in a statement on Monday.

The 200,000-ton, 400-meter-long vessel had been traversed diagonally in the channel not much more than 200 meters wide.

After an operation that involved towing and dredging activities, the ship was completely refloated and it is being towed north to the Great Bitter Lake in Egypt for security checks.

The blockade cost the canal between $ 14-15 million a day, disrupted the global supply chain and raised the value of freight for oil tankers.

We will tell you exactly what the operation consisted of freeing Ever Given and resuming world trade, in three keys.

A total of 11 harbor tugs and two powerful maritime tugs were deployed, according to Boskalis, a company based in the Netherlands that participated in the Ever Given rescue, through its specialized SMIT Salvage team.

The tugs worked for several days, using cables or standing directly alongside the freighter, to separate it from the sandbars on both sides of the canal.

Osama Rabie, head of the Suez Canal Authority, explained that the tug boats had managed to change the orientation of the vessel by 80% and move it away from the shore of the canal 102 meters.

While it was aground, the Ever Given was barely four meters from the shore.

On Friday and Saturday there had already been little progress and the boat had moved “30 degrees from left to right”.

Full moon It caused the tide to rise, which helped the ship to be dragged, first from the stern and later from the bow, EFE detailed.

According to The Washington Post, the full moon led to the highest tide of the month.

As the tugs struggled to move the ship, dredgers were brought in to excavate the mud and sand under the ship’s bow and stern.

Approximately 30,000 cubic meters of sand were dredged, according to Boskalis.

Dredgers are a familiar sight in the Suez Canal, according to Sal Mercogliano, an expert in maritime history at Campbell University in the US, as they are used to continually dredge the track and keep it navigable.

“Basically, large machines extract mud from the bottom, which can then be deposited on the ground,” Mercogliano specified. 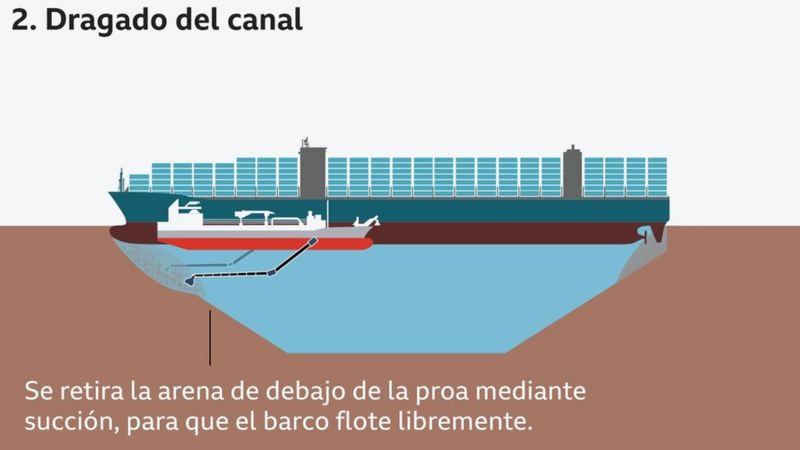 Had the dredging and towing failed, there would have been a third option: removing the cargo and fuel from the ship.

But it would have required a delicate and long operation, to avoid unbalancing the weight of the freighter and that it could tip over.

3. Organization of the boats

The enormous traffic that the channel usually receives had to be redistributed to carry out the operation and waiting for it to be successful.

At least 437 vessels, including container freighters and oil and natural gas tankers, were waiting for the Ever Given to be released to pass through the canal, according to the Gulf Agency Company (GAC).

“Currently 193 vessels are waiting in Port Said (on the Mediterranean coast of Egypt) to travel south and 201 in Suez (on the Red Sea) to travel north. Another 43 are waiting in the Great Bitter Lake, ”in the center of the canal, GAC said in a statement collected by the EFE agency. 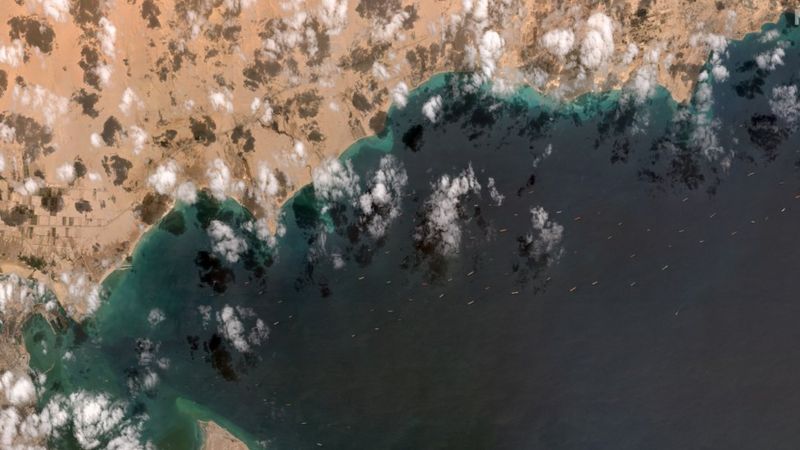 The Suez Canal Authority said it would take up to three days to resume ship traffic. (Reuters).

The transit of these freighters will resume in an orderly manner and in shifts since the southern stretch of the canal only has one lane, GAC detailed.

The Suez Canal Authority warned that it may take up to three days to alleviate ship backlog stuck at both ends of the road.

But Maersk, the main shipping company operating in the Suez Canal, said it could take “six days or more” for the jam to dissolve.

Many ships had already decided to change direction through the Cape of Good Hope, circling Africa, prolonging the journey by two weeks and raising fuel costs.