Naomi Biden, granddaughter of Joe Biden, won applause with her tenderness and sympathy, celebrating her famous grandparents with their messages and expressions of affection.

After the news broke that Joe Biden was the new president-elect of the United States, a photo spread like wildfire. A happy grandfather, immersed in a loving embrace from his grandchildren, which was shared as the first snapshot of the Democratic candidate upon learning that he had finally won the tight elections of this 2020.

The author of the photograph that will undoubtedly go down in history is from Biden’s granddaughter, Naomi, who is a lover of politics. She accompanied her grandparents on many of their trips when he was vice president, to places like New Zealand, Turkey and China. Today she is 27 years old and studied at the University of Pennsylvania and Columbia Law School and has become the most mediatic Biden, with the permission of her grandfather.

According to NBC, Biden and his wife, Jill, were in the courtyard of their house when they heard applause coming from the living room, where the family was watching television. The grandchildren ran up to them to yell, “Grandpa! Grandpa! We have won!” This was the preamble to this endearing image: 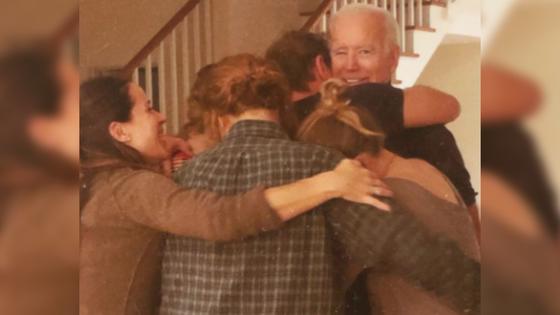 Naomi was named after Biden’s deceased daughter, who lost her life with her mother, the politician’s first wife, in a tragic accident in 1972.

“Whoever wants to get to Joe Biden, will have to face us,” he also wrote with great sympathy under this photo. “We may not be too scary, but don’t forget, our grandmother is Jill Biden!”

Anyone who wants to get to @joebiden, will have to get past us first 👊 ⚡️💪😜

The Democrat and his wife will be the new tenants of the White House. With a great sense of humor, this is how the next first lady celebrated her husband’s victory.

“He will be a president for all our families,” he wrote just to the postcard in which they both held a sign that read, “The doctor and Vice President Biden live here.” By putting her hand on vice, you can read already President Biden.

He will be a President for all of our families.

Naomi often posts messages of support for the candidate, such as the one she posted on her Twitter account on August 18, 2020, the day the first televised election debate between Joe Biden and Donald Trump took place, “I’m proud of to be your granddaughter every day. But tonight, I’m just as proud to be an American.”

Naomi’s name has a special meaning for the Biden family, as that was the name of Joe’s 13-month-old daughter, who died with his wife Neilia on December 18, 1972 in a tragic accident.

Naomi has two little sisters, Finnegan , 20, who attends the University of Pennsylvania and keeps a low profile, and Maisy, 19.

After that misfortune, the former vice president stayed with his other two children, Joseph ‘Beau’ III and Robert Hunter , Naomi’s father, who survived despite being seriously injured.

According to the BBC, Biden wrote, years later, this emotional message about the fact, “I began to understand how despair leads people to liquidate everything, how suicide was not just an option but a rational option. But I looked at ‘Beau’ and Hunter asleep and wondered what terrors they had in their dreams and who would explain my absence. And I knew I had no choice but to fight to stay alive.”

Naomi is a great sports lover and is in a relationship with 23-year-old Peter Neal who is a lawyer.

He is a young man whom he met in 2018 through mutual friends, and he is also involved in politics since he was a fellow in the White House with Obama, he was also in the Hillary Clinton campaign for the presidency, four years ago .

I don’t know why Peter looks like he has lived and worked on this boat his whole life.

According to Vanity Fair, Peter is preparing his doctorate in law at the University of Pennsylvania and is scheduled to finish it in 2022.

Barack Obama is “Afraid” of His Daughter Sasha : He Explains Why

The Governor of Georgia certifies Biden’s victory in that state

USA : With the Transition in Limbo, a Republican Majority Still Mistrusts the Election